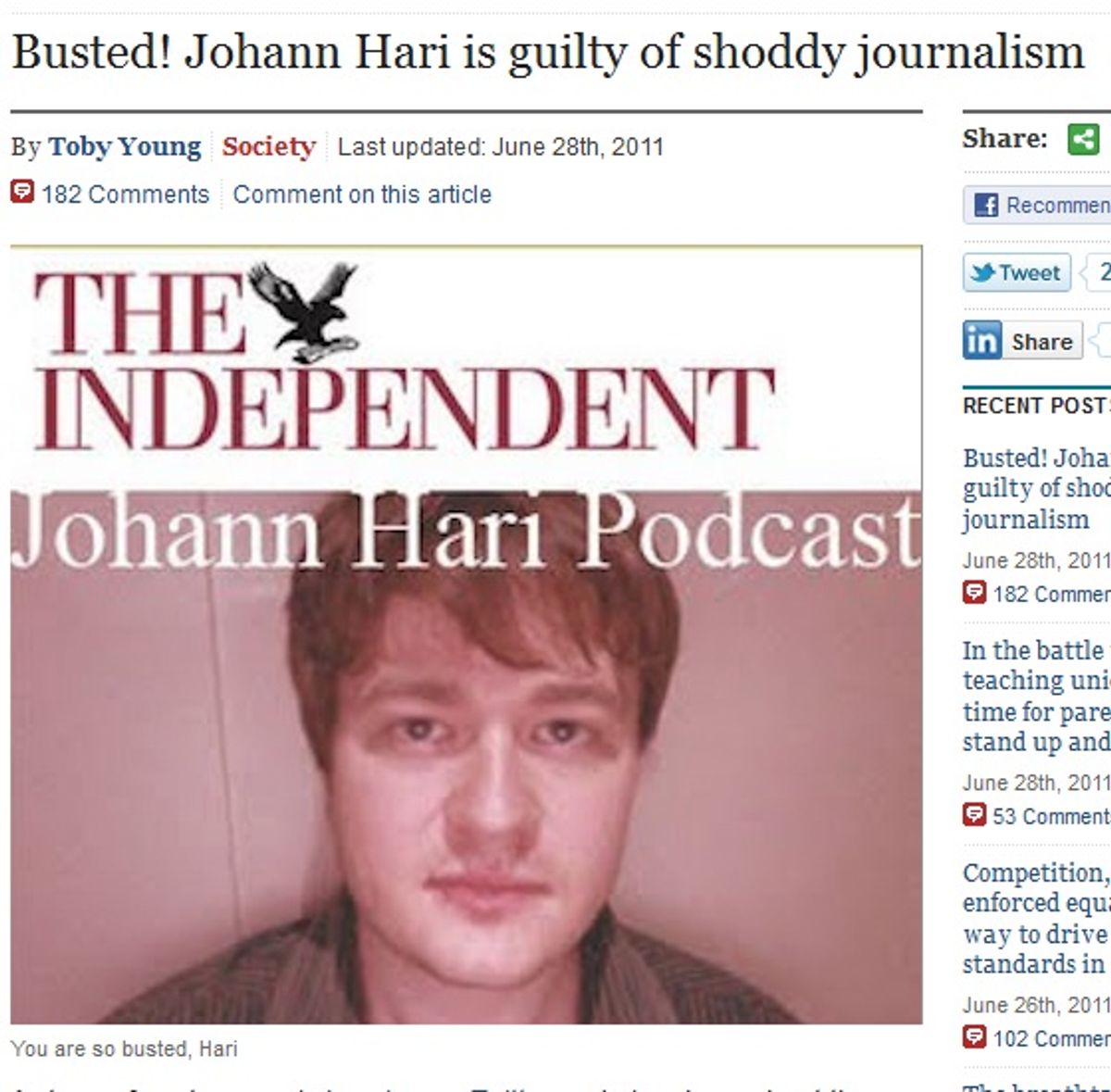 Toby Young, in the Telegraph, calls out Johann Hari of the Independent
--

Big UK press scandal, everyone! Johann Hari, a prize-winning superstar lefty columnist for the Independent, has been caught engaging in a bit of light plagiarism. Hari apparently routinely takes old quotes and writings from interview subjects and pastes them into his interviews, without attribution. He was caught by a cadre of anonymous ultra-leftist bloggers known as the Deterritorial Support Grouppppp, and, after a bit of a Twitter firestorm, called out in the rival Telegraph by Toby Young, a British media person best known here for his failed stint as a "Top Chef" judge.

This quote-recycling (or inventing) is apparently a not-uncommon practice, Young says, though it's rare among the famous and successful:

Now, it would be dishonest not to point out that many British journalists are guilty of this practice. In America, if a journalist lifts a quote from elsewhere, the custom is to provide a source, i.e. “as Negri said in Negri on Negri …”, but in Britain there’s no hard and fast rule. What’s curious about this case is that, in general, the lower down the professional totem pole, the more likely a journalist is to indulge in these cut-and-paste shortcuts. For someone of Hari’s stature to be found guilty of it – a winner of the Orwell Prize, no less – is unusual. Hari is a holier-than-thou, butter-wouldn’t-melt-in-my-mouth, supercilious Lefty, not a tabloid hack.

American-style standards of professionalism have long been more of a suggestion than a tradition in the British press, where the newspapers have overt political stances, the Murdoch tabloids hack the phones of celebrities, potentially libelous stories are printed in "satirical" magazines, and most of the papers are constantly sniping at one another. All of this means that UK newspapers are much livelier and more fun than their American counterparts, with the circulation numbers to prove it. It also means that every now and then someone is accused of making things up, and then a bunch of longtime journalists share stories of editors inserting fiction into their copy or what-have-you. ("He told me to put that in, and -- you've guessed it -- he cut out my disclaimer, and the piece appeared the next morning claiming that the Museum of London had found a Roman brothel.")

Hari has unconvincingly defended himself at his personal site. The Independent has not commented, but its editor defended Hari on Twitter.