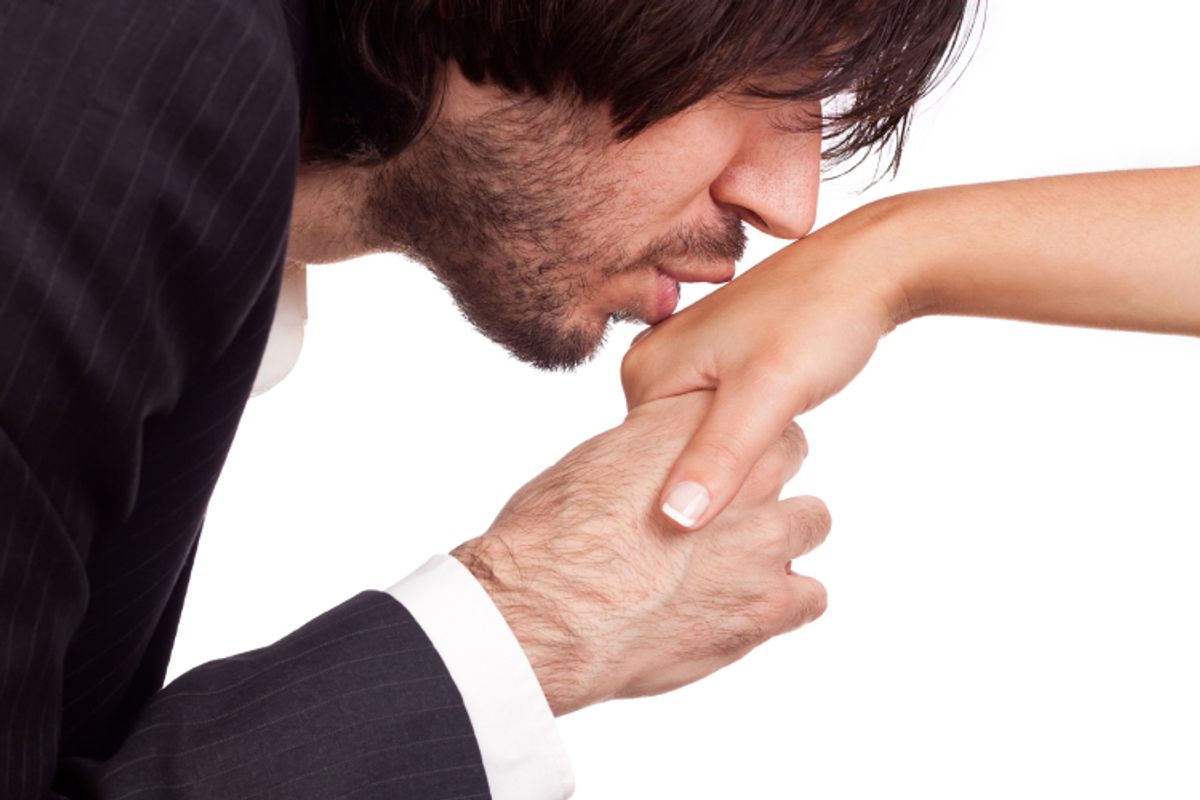 Did you hear the one about the angry feminists, all ticked off at your manly courtesy? On Tuesday, Forbes blogger Jenna Goudreau asked "Is Chivalry Sexist?" Earlier this month, the ever controversy-stirring Daily Mail bellowed that "Men who hold open doors for women are SEXIST not chivalrous, feminists claim." And the charmers at Chicks on the Right  announced that a recent study had filled them with "a desire to punch the nearest self-proclaimed feminist in the face." Now that's just unladylike.

What's up with all the dude shaming and manners hating? In a study called "Seeing the Unseen"  by Janet Swim of Pennsylvania State University and Julia Becker of Philipps University Marburg, Germany, the psychologists had 120 college students in the U.S. and Germany keep a journal of sexism they noticed over a seven-day period. In addition to blatantly hostile and derogatory behavior, the subjects also noted "benevolent sexism," which "portrays women as 'pure,' the 'better' sex, and as idealized caregivers." In other words, don't be nice to women, right?

That's certainly the impression you might get reading through the stories and accompanying comments that have come in response to it. "Men -- you don't need to put up with this BS whining from over-privileged spoiled Western women," wrote a commenter on the HuffPo story on the study, while another railed, "Do you believe men are human? It doesn't look like it. If it weren't for men, you'd never have the right to vote." A commenter on Forbes, meanwhile, noted, "Life is not a bunch of wussy humanitarian ideals that mean nothing, like equality or gender rights." Another day on the Internet, another day of proof that there are some seriously angry dudes out there, you wussy humanitarians, you.

In her Forbes post, Jenna Goudreau writes, "Part of me feels that, with the monthly pains, likely childbearing and perpetual double standards of womanhood, I am owed some grocery lifting, pedestal placing and occasional spider killing by the men in my life. Likewise, certain gendered behaviors have such deep roots in romanticism—he pays on the first date, he gets down on one knee—I would truly be sad to see them go." First of all, having been through childbirth twice, I can assure Goudreau that a little spider killing doesn't constitute quid pro quo. (And everybody knows it's bad luck to boot.) More significantly, the idea of being "owed" anything by virtue of one's gender is what's pretty sexist here.

And that's one of the important parts of the study -- tiny in its size and limited in its scope though it was -- that hasn't been mentioned much in all the hand-wringing about how those darn feminists are trying to take away the right to hold doors. Women engage in benevolent sexism all the time too. As the study's authors wrote, they "endorse sexist beliefs, at least in part, because they do not attend to subtle, aggregate forms of sexism in their personal lives."

Admittedly, if ESPN refers, as it did in recent news crawl about Wimbledon, to the "men's" and "ladies" results, that's not exactly the semantic hill anybody wants to die on. (The correct terms are "gentlemen's" and "ladies," by the way.) But if a woman I know, who'd risen to vice president of her company, isn't thrilled about the colleague who praised her for "thinking like a man," maybe she's on to something. Likewise the underwhelmed woman whose sonogram technician announced she was having a daughter by saying "It's a princess!" Few among us are either man-brains or princesses, nor do we necessarily aspire to either extreme.

Most of us feminists -- male and female -- the Chicks on the Right would like to punch in the face can distinguish between good manners and condescension. We know human beings can accept sincere kindnesses from each other being without being exploited. We are even comfortable in our differences. We just don't trade in flippant generalizations about gender, even ones that would put us on a pedestal we never asked for. Why would we, when the view from side by side is so much nicer? And anyone with a brain knows, there's a world of difference between opening a door for a woman and trying to stand in her way.