"Friday Night Lights" life lessons: You are going to fail 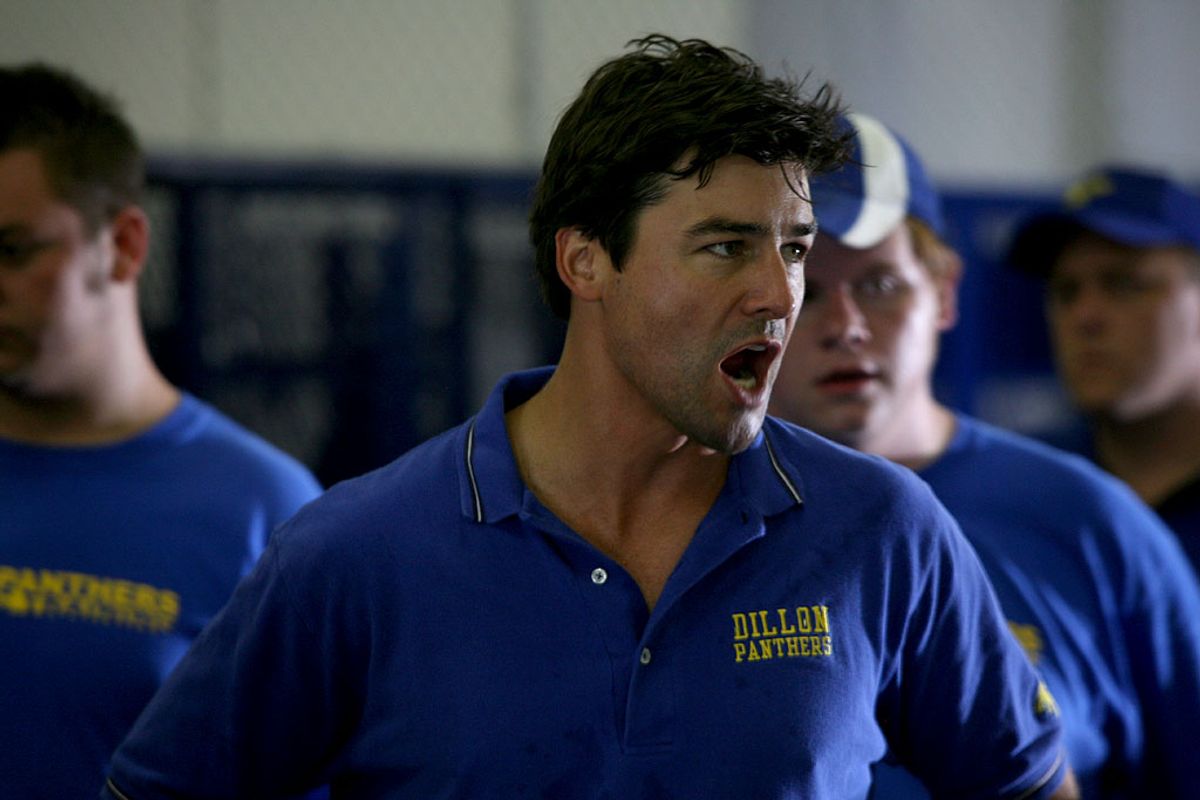 While not the biggest fan of sports culture, I was hooked on the show "Friday Night Lights" from its premiere episode. The soaring music that crescendoed when a ball was mid-air was somehow just as mesmerizing as watching Taylor Kitsch take off his shirt.

Now that the show is in its final season on NBC (though technically the finale played back in February on DIRECTV), there's no denying that the tragically under-awarded series has been held together by some amazing performances. In particular, Kyle Chandler as the stoic Coach Eric Taylor has imparted five years of wisdom, not all of it about football. What has Coach T. really taught us? He taught us all how to fail, and how to fail well.

Here are some "Friday Night Light" tips for when you lose at life.

In the "devil town" of Dillon, everyone must eventually answer for their sins. Whether its conning your church out of money to buy steroids, making an off-handed racist remark to the press, or screwing your crippled best friend's girlfriend -- and hey, we're still in season one! – there is no moral or ethical slip that goes unpunished on "Friday Night Lights."

And while that could turn another type of show into a real downer, Coach T. is always there to pick you up when you fall … as long as your hubris doesn't stand in the way. When QB Matt Saracen skips practice to get drunk at the local strip club in season two, and misses his grandmother's trip to the hospital (yikes), it's hard to imagine anyone getting back on their feet from that kind of screw up. But as Coach knows, there's nothing like an ice-water bath and some primal crying to start the healing process.

On the other end of the spectrum, you have the McCoy family: with son J.D. too proud (or scared) to break away from his over-achieving, physically abusive father and side with the protective coach, he ends up taking on more and more of his old man's nasty qualities. Both Matt and J.D. make bad decisions because of their daddy issues, but only Matt is strong enough to ask for help. Guess who ends up better off in the end?

2. If you're going to lose, lose honorably

The Panthers lost the state championships at the end of Season 3, and it cost Coach T. his job at the school. That's the part of life where most people would give up and crawl under the covers with a bottle of Xanax. But Eric Taylor knows he made the right call by benching J.D. and putting Matt in, even if that meant losing the game and hurting his career.

This theme is repeated off the field as well: Tim Riggins going to jail for his brother when the police raid their chop-shop; Lyla Garrity continuing her cheerleading after her affair with Tim makes her a social pariah; Jason giving up his dreams in order to raise the child he accidentally fathered. After all, losing is half the game, and as Tami Taylor puts it, "Either way, the sun is going to come up the next morning." Sure, it's a rehashed line from "Annie," and the point is even more cliché, but it still holds water … win or lose, in life it's all about how you play the game.

3. Surround yourself with your people

Even Coach Taylor isn't infallible, and when he does screw up, he has the support of his team, his family, and even Buddy Garrity to rely on. No one on "Friday Night Lights" can do it alone, and woe to the person who tries to remain tough and aloof when trouble comes knocking. Everyone on the show has to learn this lesson – some people like Tim Riggins have to learn it over and over – but the nice thing about football metaphors is that they work even when you've heard them a thousand times before. There is just no "I" in Taylor's team.

Unfortunately, that does means the show occasionally takes a small-town mentality when it comes to characters trying to leave Dillon to move on with a life past high school football. This is usually shown as a bad decision, like when Coach goes to teach college ball at the end of season one, or when Riggins goes to college. Whatever happens to Jason Street or Smash or Lyla after they head out into the big scary world is their own affair … by leaving the Dillon nest, they are removed from the sacred circle privy to Coach's pep-talks. We can only imagine that they're all gutter junkies now, turning tricks and wishing that they'd stayed in Texas.

4. Failure is a state of mind

Living in Dillon isn't easy. This is doubly so if you live in East Dillon, which is so completely different from (West?) Dillon that it's basically "The Wire's" portrayal of Baltimore dropped down in the south. East Dillon is so messed up that no one on the show really even talks about its existence until a Katrina-like natural disaster somehow decimates the poor, black side of town (but not the affluent suburban area). Or when Coach T. is exiled to run the East Dillon Lions as punishment for not throwing himself at the mercy of Mr. McCoy. But looking around the decimated playing field of East Dillon High, Mr. and Mrs. Taylor make their first move together: picking up the garbage strewn on the grass, one piece at a time.

By the end of the fifth season, the Lions are the new Panthers, thanks to tough love from a coach who won't let his team be defined by their poor track record, bad attitudes, or shady after-school activities. If you want to act like a coward, you best get the hell off the field and out of the coach's house.

On "Friday Night Lights," almost every episode includes a character learning something about themselves and becoming better for it: a better friend, a better son or daughter, a better teammate. But for all the emotional manipulation that the show cleverly steeps itself in, it grounds itself with the memory of its very first episode, when star quarterback Jason Street is paralyzed from an injury during a game. Sometimes life is suffering, princess, and there is no way you can "better yourself" out of the pain.

Coach T.'s voice leading the team in prayer at the end of the pilot episode sums this up better than I ever could:

"Give all of us gathered here tonight the strength to remember that life is so very fragile. We are all vulnerable. And we will all, at some point in our lives, fall. We will all fall. We must carry this in our hearts: that what we have is special, and that it can be taken from us. And when it is taken from us, we will be tested. We will be tested to our very souls.

We will now all be tested. It is at these times, it is this pain, that allows us to look inside ourselves."

In other words: just because you can't fix it, doesn't mean you can't grow from it. Clear eyes, full hearts … yes, even if you lose.