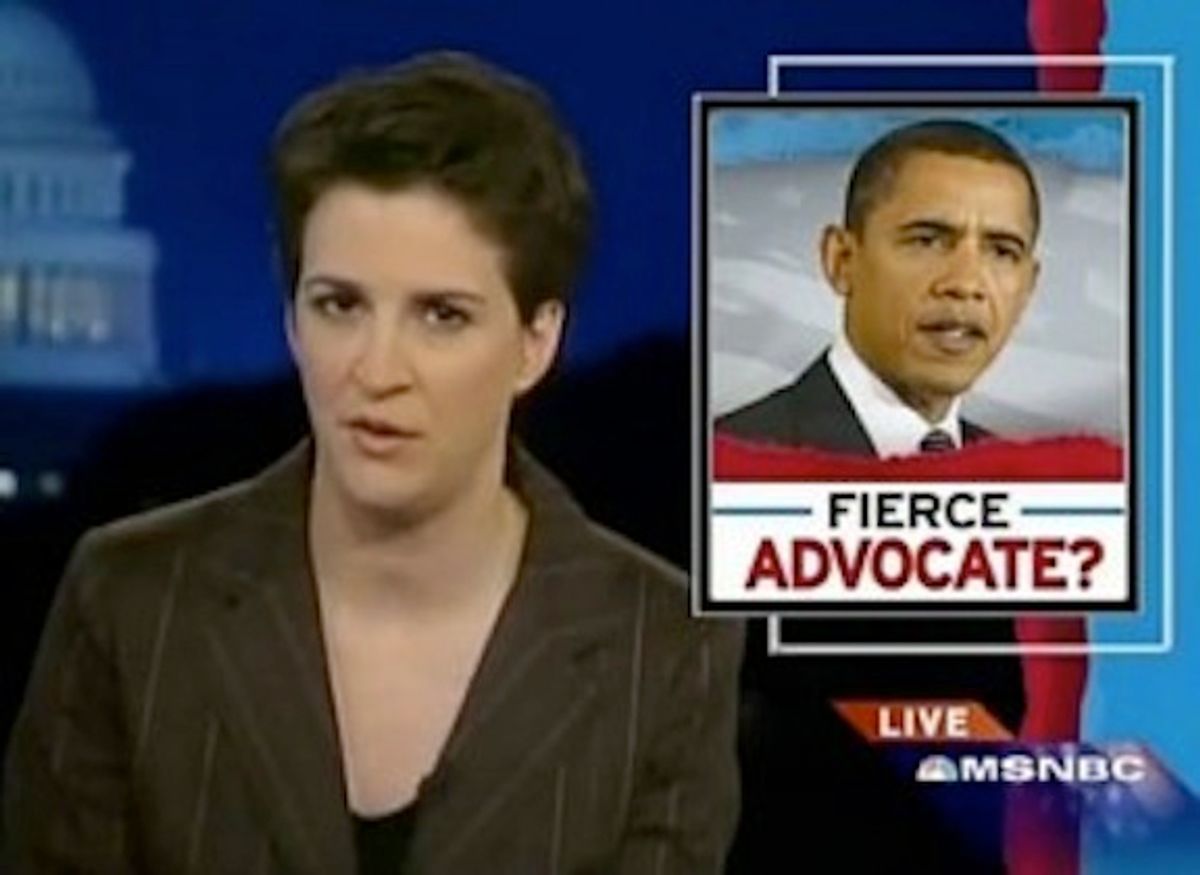 Following the announcement on Friday of same sex marriage legalization in New York, Rachel Maddow made a comment on her MSNBC show -- a comment which invited a backlash Maddow could not have expected.

"Obama is against what just happened" she said, to express that the president had not supported marriage equality; something Maddow has pointed out numerous times. The MSNBC host is correct in so far as Obama has not lobbied in support of same sex marriage -- his so-called "evolving" position on the issue has culminated in his calling New York's vote "a good thing." But Maddow's comment invited a backlash on Twitter from Obama fans, and some of the criticism was heated.

"What u said was that Obama was against what happened in NY which is inherently dishonest. U made like he lobbied against the bill," read one tweet; "why did you lie?" demanded another; and "@maddow has Hate and Racism towards Obama!" wrote another. The playwright and journalist J. Samuel Cook tweeted, I feel sorry for all the #LGBT Americans whose victory last night in New York is overshadowed by @maddow's and @ltdanchoi's hatred of Obama."

Allan Brauer, a blogger at AngryBlackLady.com, wrote that Maddow was refusing to acknowledge a quote from a letter Obama wrote to an LGBT group in California in opposition of Prop. 8. "I want to congratulate all of you who have shown your love for each other by getting married these last few weeks," Obama wrote in 2008. Others point to the fact that Obama's view is "evolving" to illustrate that Maddow's use of the word "against" did not do justice to the president's view on marriage equality.

On Monday night, Maddow commented again on Twitter, noting "Pres Obama doesn't support same-sex marriage. It's OK to be mad at me for saying it, but it's still true." She then linked to a 2009 ABC interview in which former White House press secretary Robert Gibbs said that Obama "does not support" gay marriage. Maddow's critics have noted that Obama's views have "evolved" since then and that her original comment suggested a more active opposition on Obama's part than did her more recent tweet.

Maddow is not the first person to publicly criticize the president and endure the wrath of his defenders. Indeed, as our own Glenn Greenwald sees it, there has been a "concerted effort by a slew of Democratic Beltway pundits over the last month or so to attack the so-called 'Left' for daring to express displeasure with the Obama administration, and to demonize those objections as unserious, shrill, irrational, purist and all the other clichés long used by this same cadre of party apparatchiks for the same purpose."

Maddow may have been a bit too strong in her initial comments, but clearly she touched a fragile, irrational nerve in the body of Obama's diehard supporters.

UPDATE: On Twitter today, Greenwald stressed an important point: For all of his "evolving" on the issue, the only formal position Obama has taken on gay marriage continues to be that he is against it.