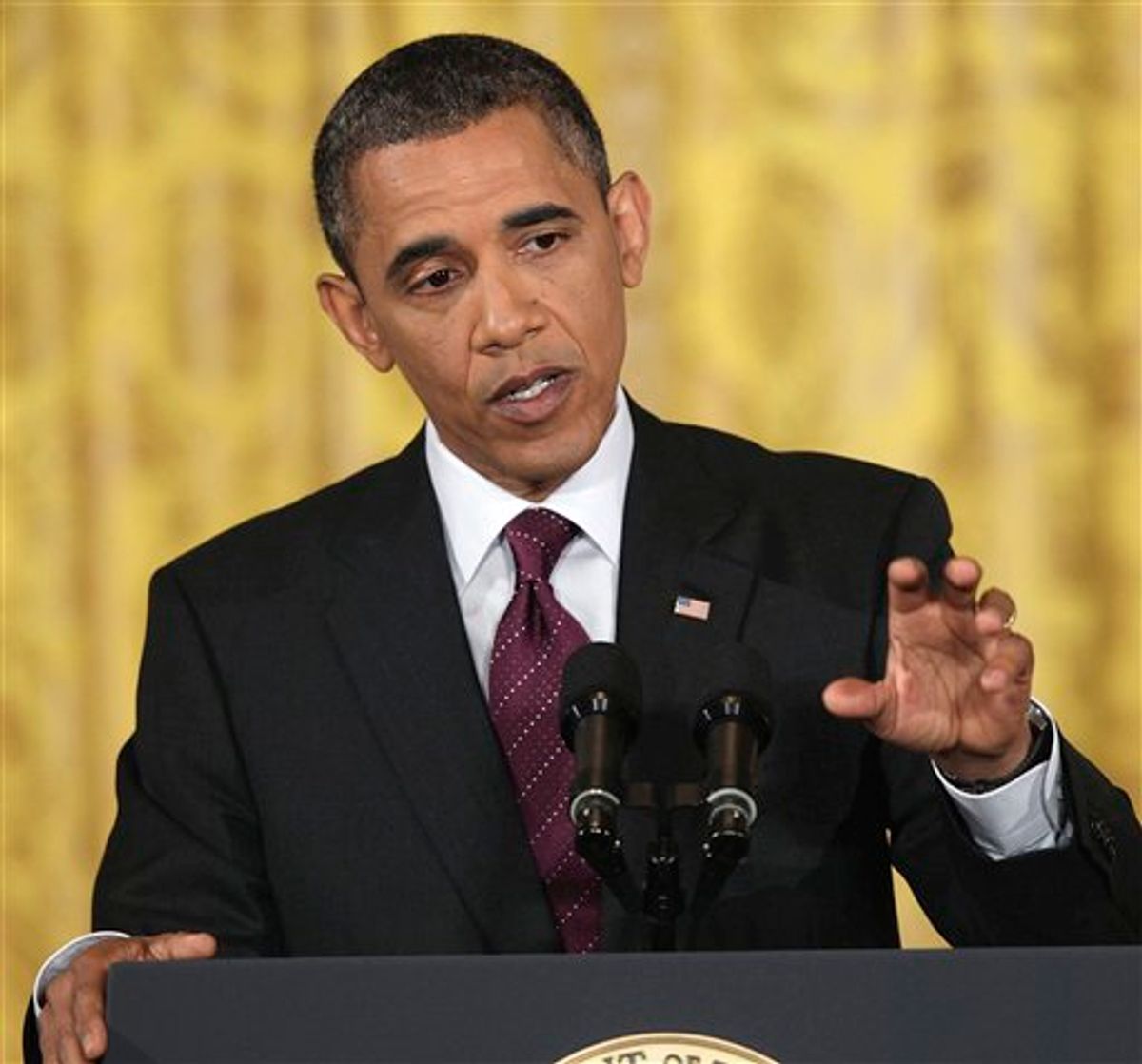 Three years into his presidency, Barack Obama is still hoping that Republican legislators will change their colors and start acting in what he sees as the best interests of the nation. In a press conference on Wednesday, while discussing the need to include both spending cuts and revenue increases as part of a "balanced approach" toward debt reduction, he repeated a long-standing theme.

"Leaders rise to the occasion and do the right thing," said President Obama in a press conference on Wednesday. "Call me naive, but my expectation is that leaders are going to lead."

All right then, Mr. President. You're naive.

In his opening statement, Obama made a case for cutting tax breaks for some of the most privileged Americans. He specified "millionaires and billionaires, oil companies, hedge fund owners, and corporate jet owners," a kind of murderer's row of top-hatted icons that average Americans are likely to have little sympathy for. Class warfare, to be sure, but completely justified class warfare. These are exactly the people who have benefited the most from structural changes in the U.S. economy over the last three decades while everyone else has stagnated or fallen back.

"I don't think that's real radical, I think the majority of Americans agree with that ... [These revenue increases are ] coming out of folks who are doing extremely well and are enjoying the lowest tax rates since before I was born. If you are a CEO or hedge fund manager, your taxes are lower than they've been since 1950."

And just as important, there's zero evidence that Obama is willing to force them to the breaking point -- to actually risk a debt ceiling-induced default by refusing to agree to a deal. There were moments during the press conference where Obama delivered some strong rhetoric on the idiocy of playing games with the debt ceiling -- on the negative consequences for job creation, economic growth, and U.S. credit-worthiness that would accrue if the U.S. government started selectively not paying its bills. But making all those points puts Obama in a box: There's only one way to get the Republicans to agree to a compromise that raises revenues, and that's to push the debt ceiling negotiations to the absolute limit -- to be more willing to risk the "full faith and credit" of the United States than Republicans are.

And everything we know about Obama says that he will not take such a step. He's not going to play games with the possibility of default. Republicans are well aware of this, and that insulates them from the need to make any concessions whatsoever.

Obama's faith that leaders will eventually lead brought to mind his answer to a question at a press conference last November, when National Journal's Marc Ambinder asked him why he didn't make sure a debt ceiling deal was included in the negotiations to avert a government shutdown. Wasn't it likely that the Republicans would play the same game of budget showdown chicken all over again ?

"Here's my expectation, and I'll take John Boehner at his word. Nobody, Democrat or Republican, is willing to see the full faith and credit of the United States government collapse, that that would not be a good thing to happen.... Once John Boehner is sworn in as speaker, then he's going to have responsibilities to govern. You can't just stand on the sidelines and be a bomb thrower."

Obama could not possibly have been more wrong then, and he's utterly wrong now. John Boehner has no incentive to lead in the manner Obama desires. It is naive in the extreme to expect any weakening in the GOP's resolve to, as Matt Yglesias so elegantly puts it, "make tax cuts for the rich affordable by reducing spending."

Obama needs to look in the mirror and repeat to himself  his own mantra about how "leaders are going to lead." If he wants a debt ceiling deal that includes revenue increases he's going to have to take a hard line in negotiations that matches Republican intransigence. That will mean brinkmanship, it will mean upsetting the bond market, and it will mean risking a financial disaster. My own belief is that the majority of Americans will understand pretty clearly that Republican resistance to higher taxes on the richest Americans will be the real guilty party culpable for a meltdown. But there's no question it's a hell of a risk to take.

But that's what leaders do.