In Afghanistan, but not the U.S.: who should teach whom about the rule of law? 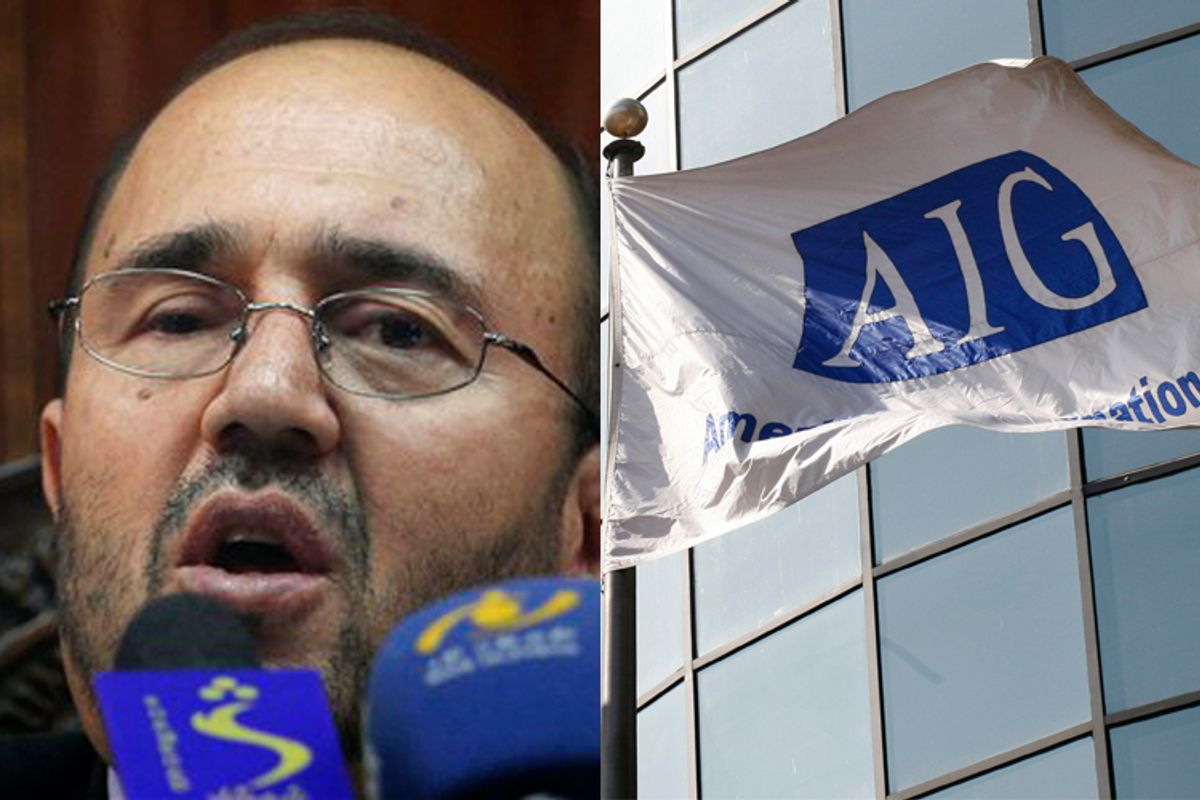 Afghan officials said on Thursday that they have arrested two former executives involved in the collapse of Kabul Bank.

According to Rahmatullah Nazari, the deputy attorney general, authorities arrested Sherkhan Farnood, the former chairman of Kabul Bank, and Khalilulah Frozi, its former chief executive officer, on Wednesday in connection with what he said was hundreds of millions of dollars in fraudulent loans to bank officers and insiders. . . .

They were the first arrests in the Kabul Bank affair since exposure of the bank’s huge losses last August. The move is likely to be welcomed by the international community, which has held up some aid to Afghanistan until government action is taken on Kabul Bank.

Some $900 million in loans were made to insiders with little or no collateral and even no repayment plan in what auditors have described as effectively a massive Ponzi scheme.

While Afghanistan is hardly a model of the rule of law -- the arrests were effectuated by a corrupt government under severe pressure from outside factions on which they financially rely -- it's nonetheless true that in the U.S., even that minimal level of accountability seems impossible:

In November 2009, Attorney General Eric Holder vowed before television cameras to prosecute those responsible for the market collapse a year earlier, saying the U.S. would be “relentless” in pursuing corporate criminals.

In the 18 months since, no senior Wall Street executive has been criminally charged, and some lawmakers are questioning whether the U.S. Justice Department has been aggressive enough after declining to bring cases against officials at American International Group Inc. (AIG) and Countrywide Financial Corp. . . .

"Can that many companies have collapsed -- large financial firms -- and not one criminal case comes out of it?" said Peter Henning, a law professor at Wayne State University in Detroit who previously was a federal prosecutor and attorney for the SEC. "That seems to go against the norm of the savings-and-loan crisis, and the accounting frauds 10 years ago."

Some of the biggest Wall Street firms rebounded from the crisis stronger than ever. Goldman Sachs’s 2009 profits were a record for the firm and JPMorgan Chase & Co. (JPM)'s earnings in 2010 and the first quarter of 2011 have been at an all-time high.

A bitter cynic might suggest that such prosecutions have not happened because both political parties are desperately competing for Wall Street cash for the 2012 election, and nothing would doom the incumbent party's chances more than holding Wall Street royalty accountable, along with the fact that the top levels of government are suffused with former bank officials and lobbyists -- but everyone knows that American justice isn't politicized that way, so that can't be it (just like everyone knows that political considerations played no role whatsoever in the presidential shield of immunity lavished on high-level Bush officials).

This isn't the first time profound differences between the American sense of justice and Afghanistan's have emerged.  In January of last year, it was revealed that the U.S. was seeking to assassinate Afghan citizens without due process, but Afghan officials vehemently objected:

Gen. Mohammad Daud Daud, Afghanistan's deputy interior minister for counternarcotics efforts, praised U.S. and British special forces for their help recently in destroying drug labs and stashes of opium. But he said he worried that foreign troops would now act on their own to kill suspected drug lords, based on secret evidence, instead of handing them over for trial.

"They should respect our law, our constitution and our legal codes," Daud said. "We have a commitment to arrest these people on our own" . . . .

Ali Ahmad Jalali, a former Afghan interior minister, said that he had long urged the Pentagon and its NATO allies to crack down on drug smugglers and suppliers, and that he was glad that the military alliance had finally agreed to provide operational support for Afghan counternarcotics agents. But he said foreign troops needed to avoid the temptation to hunt down and kill traffickers on their own.

"There is a constitutional problem here. A person is innocent unless proven guilty," he said. "If you go off to kill or capture them, how do you prove that they are really guilty in terms of legal process?" . . .

If only American officials were as vigilant in applying basic norms of Western justice to the due-process-free assassinations of their own citizens.  Remember, though, we have to stay in Afghanistan for at least three more years to teach them how to live under minimum notions of freedom and the rule of law.

Speaking of living under minimum notions of the rule of law, liberal Yale Law Professor Bruce Ackerman has an article this morning entitled "The Lawless Presidency," in which he examines what he calls the "emerging crisis of legality within the executive branch."

A U.S. drone aircraft fired on two leaders of a militant Somali organization tied to al-Qaeda, apparently wounding them, a senior U.S. military official familiar with the operation said Wednesday. . . .

The airstrike makes Somalia at least the sixth country where the United States is using drone aircraft to conduct lethal attacks, joining Afghanistan, Pakistan, Libya, Iraq and Yemen. And it comes as the CIA is expected to begin flying armed drones over Yemen in its hunt for al-Qaeda operatives.

In at least 3 of those countries (4 if one counts Pakistan), these military attacks are being waged without any Congressional authorization, based solely on the decree of the 2009 Nobel Peace Prize laureate, who yesterday expressed his contempt and frustration for the notion that he needs anyone's permission -- least of all Congress' -- to order the U.S. military to launch attacks in foreign countries.


UPDATE II [Fri.]:  In his Washington Post column today, David Ignatius explains the "biggest challenge for America" in Afghanistan:  "The United States must help the Afghan government provide justice and other basics of governance in the Pashtun areas where the Taliban took root. An old Pashtun proverb says that 'a country without law is a jungle,' and if the jungle remains, the Taliban wins."  For the American Teachers of Justice, there is, fortunately, a nearby classroom from them to use:  the nearby prison at Bagram, where the Obama administration has won the right to imprison thousands of Afghans for years without a shred of judicial process.