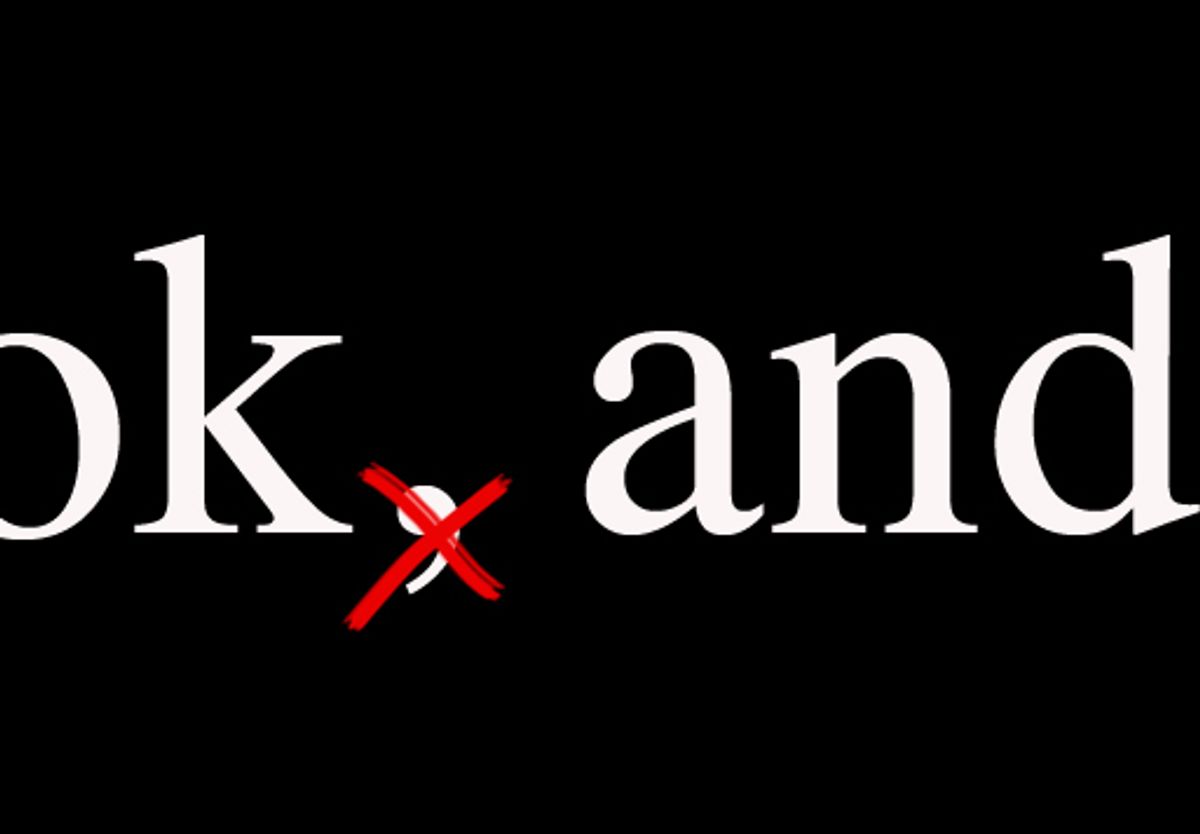 Grammar lovers today were saddened, shocked, and mightily displeased at the news that the P.R. department of the University of Oxford has decided to drop the comma for which it is so justly famed. As GalleyCat reported, the university's new style guide advises writers, "As a general rule, do not use the serial/Oxford comma: so write 'a, b and c' not 'a, b, and c'." Cue the collective gasps of horror. The last time the nerd community was this cruelly betrayed, George Lucas was sitting at his desk, thinking, "I shall call him Jar Jar."

The serial comma is one of the sanest punctuation usages in the written language. It gives each element of a series its own distinct place in it, instead of lumping the last two together in one hasty breath. Think about it -- when you bake, you gather up your eggs, butter, sugar, and flour; you don't treat sugar and flour as a pair. That would be crazy. That is why, like evangelicals with "John 3:16" bumper stickers on their SUVs, punctuation worshipers cling to CM 6.19 – the Chicago Manual of Style's decree that "in a series consisting of three or more elements, the elements are separated by commas. When a conjunction joins the last two elements in a series, a comma is used before the conjunction." So valuable is that serial comma that it's on frickin' Page 2 of Strunk and White, right after the possessive apostrophe. And it is good.

There are those who disagree. The AP and New York Times eschew it, and everyone knows what a bunch of hacks that lot is. Here at Salon, meanwhile, I can now reveal that for years one of our great roiling internal tumults was over the serial comma. Our house style, imposed largely by the recently departed despot King Kaufman, was opposed to it. I am, clearly, violently in favor of it, and have spent the better part of the last 15 years enduring the pain of watching our editors systematically remove it from my stories. Oh, how it burns!

Why, in a world where "M I RITE?" constitutes a legitimate conversational volley, would anyone care about an Oxford comma? It's precisely because grammar -- don't even get me started on spelling -- has become so expendable that it's conversely become so precious. A friend tells of a text she got prior to a first date with a new man that read, "I'm looking forward to seeing you, too." As she puts it, "A comma before the 'too'? Nobody does that anymore. I saw that and thought, 'I'm in luuuuuuuv.'"

I'm not saying the serial comma works perfectly before every "and." It certainly shouldn't be employed if you're not describing a series -- hence the term. If you're discussing "my friend, a gentleman and a scholar" and you're using "a gentleman and a scholar" to characterize your friend and not two other people along for the ride, a comma there would be a bad idea. But for clarity in list-making, for that sweet pause of breath before the final item in a group, the serial comma cannot be  topped.

It's true that Oxford's new punctuation guide is only for its P.R. department, and it comes with the clause that "when a comma would assist in the meaning of the sentence or helps to resolve ambiguity, it can be used." The university press, Oxford further hastens to remind us, remains "a commercially and editorially autonomous organization." But the prospect of the beloved Oxford comma being dumped by its own kin seems cruelly ominous. It's like Hugh Hefner saying he's no longer interested in blondes. And though you may think you've taken away our beloved little swipe of typeface this time, comma haters, the serial comma community is determined, tenacious, and resilient. We will keep sticking the comma into our sentences, and still sacrifice that one valuable character of our tweets in its service. We may still be reeling with denial, anger, bargaining, and depression,  but you will never, ever have our acceptance.

UPDATE: In response to the outrage, Oxford University reassured distraught grammar fans today that its comma drama had been greatly exaggerated. Maria Coyle of the university's press office stated that the edict to eschew the serial comma was only for press releases and internal communication, and  furthermore "is not new, it's been online for several years already." The Oxford Dictionary's site has also added a new blog post Thursday, reasserting its tough, pro-comma stance. New Hart's Rules live. Long live Hart's Rules.