The mindless hysteria of right-wing sheep

Hey, Dittoheads: You're being played for suckers! 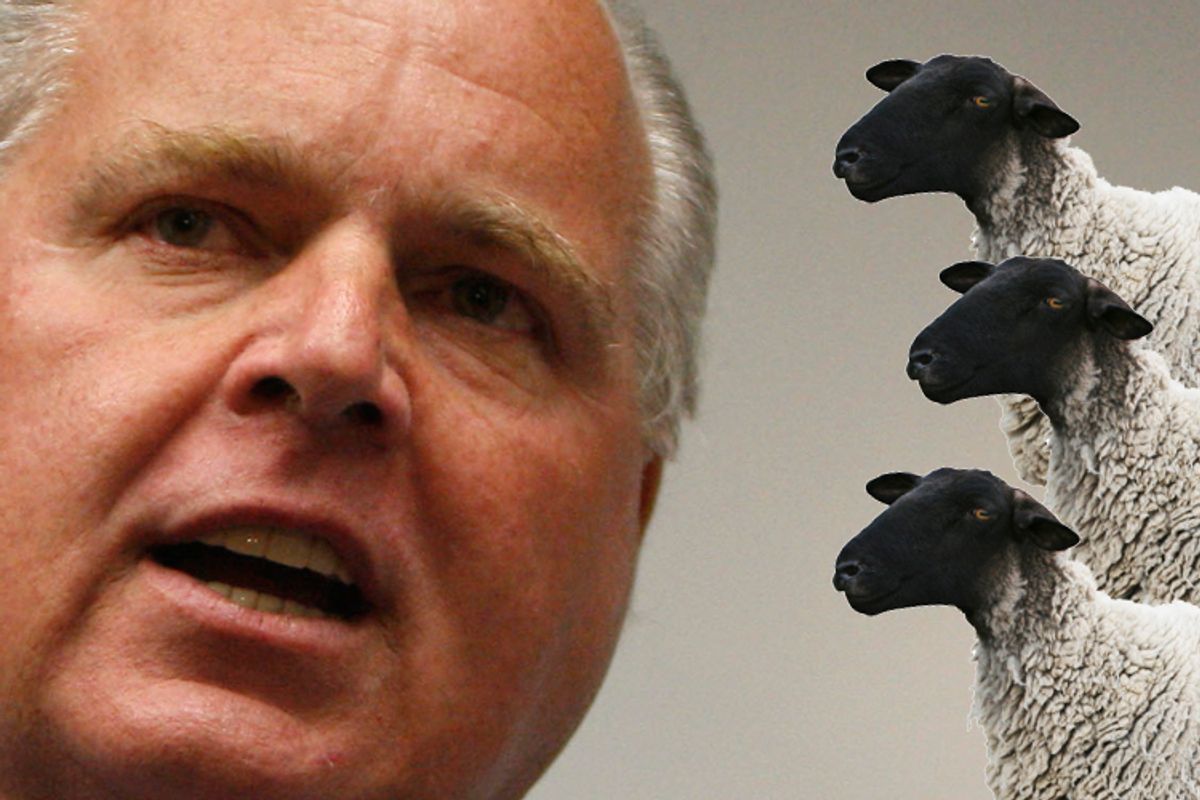 Politics makes people stupid even in good times. Fear provokes irrationality. Given the parlous state of the U.S. economy, it's no surprise that the national conversation has grown shrill. Even so, the level of vituperation and unreason comes as a continuing revelation.

Not that I'm complaining. As a native of New Jersey, the Insult State (official motto: "Oh yeah, who says?"), there's no level of invective to which I can't sink. Anybody who writes provocatively shouldn't complain when readers are provoked. Besides, it's less the anger than the sheer, boneheaded illogic that amazes me.

One could compile a textbook on logical fallacies from my email queue. If people used reason in their daily lives as poorly as they do when their political passions are engaged, we'd be in worse shape than we are. Luckily, most don't. Or if they do, civility prevents them from the kind of heedless venting encouraged by Internet anonymity.

A recent blog post by New York Times columnist Paul Krugman set me off. A world-renowned economist by trade, Krugman had posted an item arguing that a Greek bank-debt default might not be a total disaster. He mentioned that Argentina's economy had a strong recovery after it defaulted in 2001 -- stipulating that there are big differences between the two countries.

In a subsequent post, Krugman complained that commenters had leaped, nay vaulted, to absurd conclusions: as if he'd said "everything in Argentina is wonderful to this day"; that "everyone should immediately default"; that default made Argentina's Lionel Messi the world's greatest football player; and that President Obama should force Americans into mandatory, government-paid tango lessons.

OK, so I made up the last two. In politics, many simply can't resist an alluring false dilemma. It's got to be all-A or all-B, all the time. Did I write a column pointing out that President Clinton last balanced the budget as recently as 2001, and that a return to Clinton-era tax policy -- i.e., letting the Bush tax cuts expire on schedule in 2012 -- would greatly improve the nation's balance sheet?

That is, I favor raising marginal income-tax rates on millionaires from 35 to 39.6 percent. Therefore, I must be a communist who advocates the abolition of private enterprise, the confiscation of private property, and the redistribution of wealth to lazy people who won't work.

"Do you get paid under the table by the Democrat Party to spew your hatred of capitalism," asks one fellow, "or is it that you have some deep-seated psychopathic (sic) scars based on the choices you made that limit your economic achievements?"

Thus are joined, in one triumphant flourish, not only the false dilemma, but the argument to (imaginary) motive, and the argumentum ad hominem: attacking the man, not the content of what he said.

Needless to say, this fellow knows nothing of my economic circumstances. He doesn't even appear to grasp that the news media are mostly privately owned, for-profit enterprises.

"Good work, comrade," I responded. "Your regurgitation of party dogma is letter-perfect. In the USSR, they actually got to the point of declaring people who failed to conform 100 percent mentally ill."

The irony was most likely lost on him.

Very well then, I must have an unacknowledged Sugar Daddy of my own. "At least now I've figured out who you take your marching orders from: Media Matters and George Soros," another guy wrote. "I know it, you know it, don't try to deny it."

Sorry, but I deny it. Without exception, however, every reader objecting to my criticism of talk-radio ethics mentioned Soros. It was like being scolded by parrots. Most called Soros a commie -- highly unlikely for a billionaire financier and philanthropist -- although I know very little about his views.

It's called the straw man fallacy: refuting arguments nobody's made.

Then there's the argumentum ad populum, another favorite of talk-radio fans: somebody with a big audience must be correct. Furthermore -- motive again -- I must be jealous of their success.

That's pretty much like saying Rush Limbaugh's jealous of President Obama. You buy that?

Look, these guys are playing you for suckers. They're reading scripts written to trick you into believing that the bigger Scrooge McDuck's bullion pile is, the better it is for you. Take away the call screeners and the mute buttons, and most of them wouldn't last two weeks. Talk radio is the political equivalent of wrestling.

Meanwhile, too many Democrats can't get their minds around "some versus all." I recently wasted hours on Facebook trying to persuade passionate Obama supporters that it's self-defeating to accuse everybody who differs with the White House on, say, Libya, of racist motives.

It's false, irrational and politically stupid because ordinary voters -- if not paid controversialists like me -- really resent it.

Needless to say, I got nowhere.