Over 1,000 people injured as Egyptians riot over delays in police officer prosecution 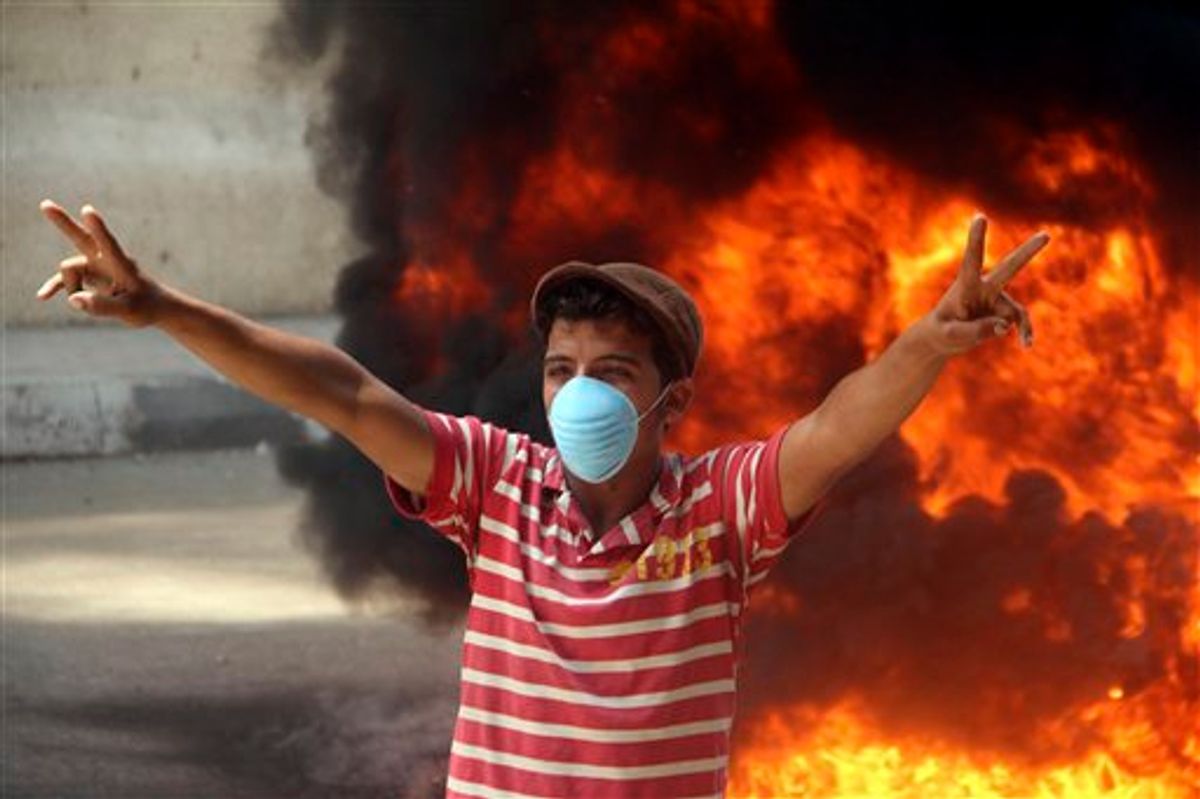 A protester wears a mask as he gestures during clashes with security forces in Cairo, Egypt, Wednesday, June 29, 2011. Egyptian security forces clashed for a second day in Cairo with hundreds of youths demanding that the country's military rulers speed up prosecution of police officers accused of brutality during mass protests that forced Hosni Mubarak to step down. More than 1,000 people have been injured, a senior official said. (AP Photo) (AP)
--

Egyptian security forces clashed for a second day in Cairo Wednesday with hundreds of youths demanding that the country's military rulers speed up prosecution of police officers accused of brutality during mass protests that forced Hosni Mubarak to step down. More than 1,000 people have been injured, a senior official said.

In scenes reminiscent of the 18-day uprising that ousted Mubarak on Feb. 11, riot police deployed around the Interior Ministry building and fired in the air or used tear gas as demonstrators threw rocks and firebombs. The fighting left streets littered with rocks and debris and a heavy, white cloud of tear gas hung over the area.

By late afternoon, army troops backed by armored vehicles took over from riot police who had been protecting the Interior Ministry, closing all roads leading to the complex, the official Middle East News Agency, MENA, reported.

The protests attest to the ongoing upheaval in Egypt nearly five months after Mubarak stepped down. The country is struggling with a worsening economic crisis and as a security vacuum that has led to a surge in crime.

The question of meting out justice to those responsible for the deaths of some 850 protesters during the uprising, as well as for regime stalwarts charged with corruption, is among the most divisive in post-Mubarak Egypt. Many of those who took part in the uprising accuse the ruling military of showing too much reverence to key figures of the old regime and lenience with senior police commanders accused of ordering the killing of protesters.

Gigi Ibrahim, one of the protesters, said security forces rained tear gas on them.

"It was like January 25," she said, referring to the first day of the uprising. "The protesters have enough anger, either because change has not come or because the Supreme Council of the Armed Forces hasn't done enough" to meet their demands.

MENA quoted Assistant Health Minister Abdul-Hameed Abazah as saying that of the injured, some 900 were treated on the spot and more than 120 went to hospitals.

Most of the injured suffered from gas inhalation or concussions, officials said. At least 18 cars and 11 stores were damaged.

Ambulances ferried the wounded to hospitals, and volunteer doctors and nurses treated others on sidewalks.

The military issued a statement on its Facebook page claiming the clashes were designed to "destabilize the country" and drive a wedge between the groups behind the uprising and the security forces. It called on Egyptians not to join the protests.

Some of the protesters used scarves to shield them from tear gas. They pelted police cars with rocks and advanced when the riot police lines retreated. The main chant back in January and February was "The people want to oust the regime." But that has been replaced by screams of "The people want to oust the field-marshal" -- a reference to Mohammed Hussein Tantawi, Mubarak's longtime defense minister and chairman of the Supreme Council of the Armed Forces that has taken over. Some of the youth groups behind the uprising see Tantawi as tainted because he was a key member of the Mubarak regime.

Critics also charge that Tantawi's policies are designed to keep the old order, and accuse him of deliberately stalling the process of purging Mubarak loyalists and failing to reform the hated Interior Ministry and its security agencies.

The clashes are likely to widen the rift between many Egyptians and the police, blamed for most of the human rights abuses during Mubarak's nearly three decades in power. They also are likely to delay efforts aimed at empowering the police to fully take back the streets. Police melted away following deadly clashes with protesters during the first few days of the uprising and army troops replaced them.

Mubarak's security chief, former Interior Minister Habib el-Adly, is on trial along with several of his top aides for ordering the use of deadly force against protesters. This week, his trial was adjourned until July 25, a decision that touched off clashes between relatives and police deployed outside the courthouse. Some of the victims' relatives want Mubarak to be included in the case against el-Adly.

Mubarak has been under arrest at a hospital in the Red Sea resort city of Sharm el-Sheikh and has been separately charged with ordering the killing of the protesters. Both men face the death penalty if convicted.

The clashes began Tuesday evening when some 100 people, claiming to be relatives of the uprising's victims, tried to storm a ceremony held at a Nile side theater to honor the memory of 10 protesters killed in the uprising. Clashes between them and security guards at the theater began when they were denied entry. The men pelted the theater with rocks.

Police arrested seven of the attackers, but the rest headed to the road outside the state television building across the river. They persuaded relatives of the victims staging a sit-in outside the building to join them. Together, they marched to the Interior Ministry, where they clashed with police and later headed to the nearby Tahrir Square, the epicenter of the uprising. They battled the police again until authorities ordered the police to pull back.

There were an estimated 6,000 protesters at the peak of the riots late Tuesday night.

Wednesday's clashes centered on streets leading to the Interior Ministry close to the downtown campus of the American University in Cairo.

Tahrir Square was closed to traffic on Wednesday, but about 1,500 protesters remained out on the streets.

A key youth group, April 6, described the police's handling of the latest protests as "brutal" and called in a statement for a sit-in in central Cairo to protest what it said was the failure to implement many of the demands from the uprising and to show solidarity with the families of the uprising's victims.