Senate to work next week on debt limit impasse

Lawmakers to miss July 4. recess for the sake of deficit talks 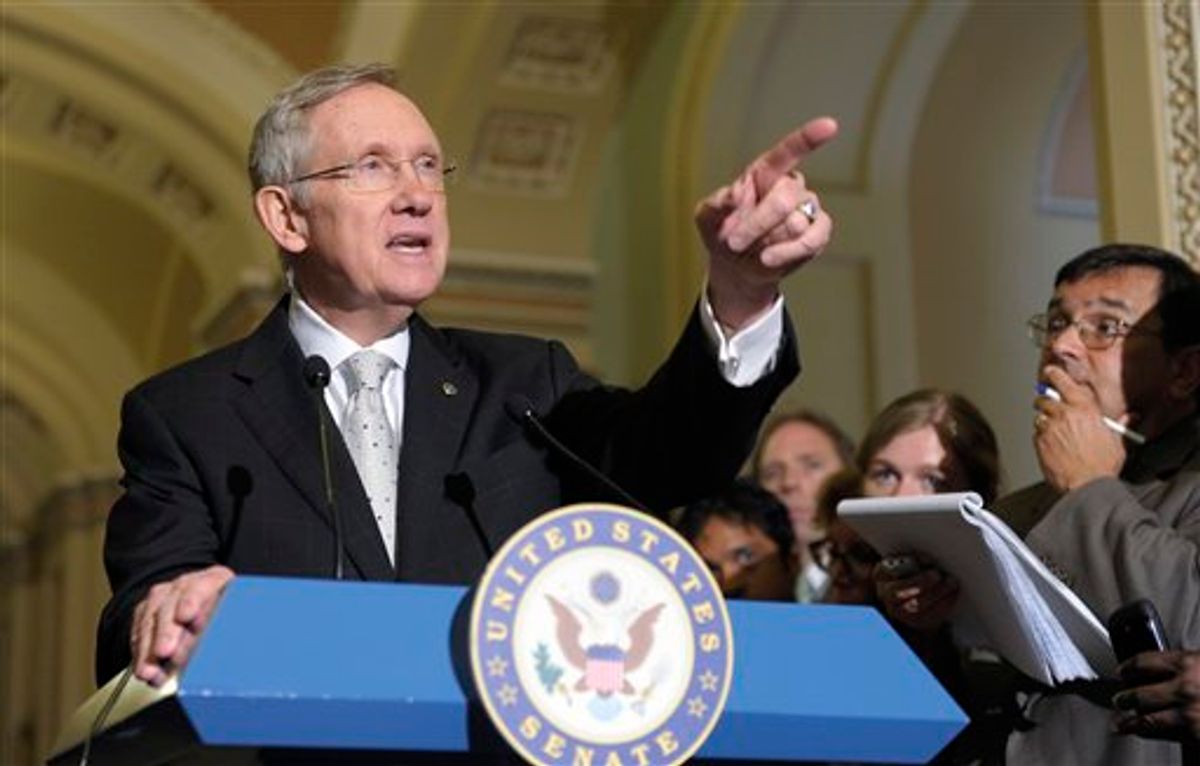 The Senate has abandoned plans for a July 4 break and instead will work next week as lawmakers race the clock in an attempt to strike a compromise on avoiding a government default and reducing mammoth federal deficits.

Senate Majority Leader Harry Reid, D-Nev., announced the scheduling change Thursday, a day after President Barack Obama prodded lawmakers to act swiftly to extend the government's ability to borrow money. The Senate had been scheduled to take a week's break but instead will meet beginning Tuesday.

"We'll do that because we have work to do," Reid said on the Senate floor.

The House had already been scheduled to work next week.

Obama had insisted there is no more time to add. And he beseeched and badgered lawmakers to complete a deal to cut long-term deficits and lift the nation's debt ceiling before Aug. 2 to avoid what his administration says would be a calamitous government default.

"There's no point in putting it off," he said Wednesday. "We've got to get this done."

But neither Obama nor the divided Congress is making it easier. The White House has identified at least $1.3 trillion in spending cuts over 10 years and is proposing up to $400 billion in new tax revenue. Republicans want more spending cuts and no tax increases.

Such brinkmanship relies on the clock; it is both a friend and an adversary. The problem with Aug. 2 is not that it's too soon, but that it's still four week away.

At a news conference, the president sought to upend the Republican argument that deficit-cutting negotiations had come to a standstill over the White House desire to increase taxes.

"The tax cuts I'm proposing we get rid of are tax breaks for millionaires and billionaires, tax breaks for oil companies and hedge fund managers, and corporate jet owners," Obama countered.

He called on lawmakers to work through their July Fourth recess. He argued that his 12- and 10-year-old daughters show more discipline getting their work done. "They're not pulling all-nighters," he said.

"Call me naive," he said at another point, "but my expectation is that leaders are going to lead."

Obama is tilting at an institutional dysfunction -- one that he himself once seemed to recognize: "If you don't set deadlines in this town, things don't happen. The default position is inertia," he said in 2009 during the health care debate. As it turned out, his deadline came and went, and it wasn't until 2010 that the health care overhaul legislation passed.

Some deadlines are too stark to avoid, but they get pushed to the brink. The government shutdown talks earlier this year came down to the final two hours. When asked what ultimately led to a deal to avoid halting government operations, one top Obama adviser said, "the clock."

Senior presidential adviser David Plouffe was asked in a nationally broadcast interview Thursday if the deadline was real.

Plouffe, who was Obama's campaign manager when he ran for president in 2008, said he believes Democrats and Republicans alike are going to have to "get out of their comfort zone" to reach an agreement that would increase the government's borrowing authority and avert a default on the federal debt.

The White House and a lame-duck Congress in late December cut an economic deal mainly for one reason: Without action, tax increases were to kick in on Jan. 1.

The Obama administration is warning that if the debt ceiling is not raised by Aug. 2, the U.S. would face its first default in history, potentially throwing world financial markets into turmoil. Many congressional Republicans aren't convinced, and some administration officials worry that it could take a financial plunge before Congress acts.

It happened before, when the Bush administration tried to persuade Congress to intervene at the height of the financial crisis in 2008. The $700 billion plan to rescue banks was defeated initially in the House in late September 2008, freezing credit markets and sending stock markets into a dive. The measure passed in the ensuing days.

The pending debt ceiling vote would have to raise the current borrowing limit of $14.3 trillion by about $2.4 trillion to last until the end of 2012.

At his news conference, Obama took issue with criticism that he has not pushed for an agreement. He argued that he has spent an hour to an hour-and-a-half each with Republican senators, Democratic senators and House members from both parties.

"I've met with the leaders multiple times," he continued. "At a certain point, they need to do their job."

House Speaker John Boehner, R-Ohio, replied that an increase in the debt ceiling will pass only if the White House agrees to spending cuts in excess of the debt limit increase, holds down future spending and raises no taxes.

"The longer the president denies these realities," Boehner said, "the more difficult he makes this process."