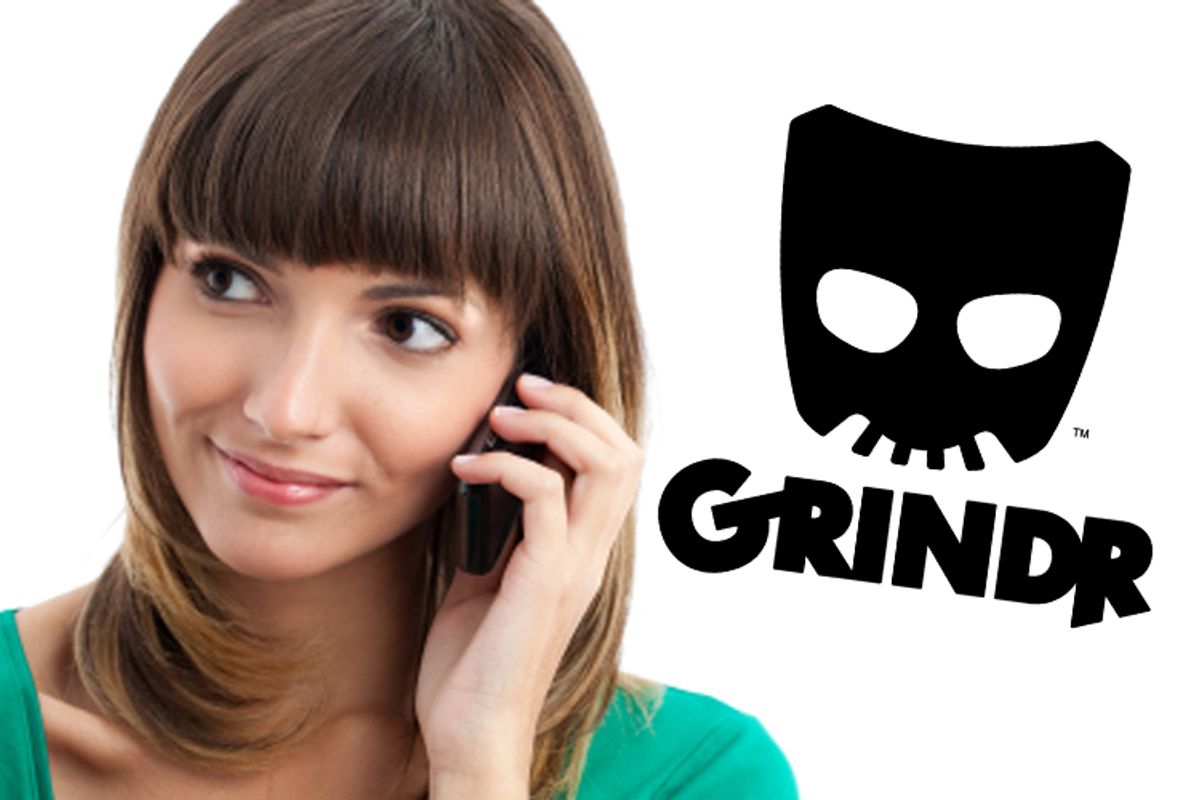 Joel Simkai, a slender, young-faced man, is eating granola and yogurt when I meet him for coffee. He is the founder of Grindr, a location-based app that allows gay men to "connect with guys in (their) area" and "browse men."  Since its launch, Grindr has grown to 2 million users and gained a reputation as something of a hookup widget for the gay community. (The app has a simple interface that shows photos of the closest 100 users at any one time, and allows you to chat and exchange photos with them.)

Now Joel and his team are about to launch their second program, code name Project Amicus, which has been referred to as a "Grindr app for straight people." "Users can expect a unique mobile app experience unlike anything currently on the market that caters to how women and men communicate together," boasts the press packet for new project. But does a straight version of Grindr even make sense? According to Joel, Amicus will do far more than help people have sex (which he argues is not what Grindr is for in the first place).

I interviewed Joel about his two apps -- and what, exactly, the point of a "straight" Grindr would be.

How did Grindr get started?

Throughout my whole life I've always been walking into a room and wondering, "Who's that?" Or when you walk into a subway and make eyes with someone, and then nothing happens. There's all these missed connections throughout your daily life, and I just feel like, "I wish I could have said something."

And as a gay man, you're always wondering who else is gay. I used to use online chat rooms and dating sites for many, many years. I would talk to people in Minnesota, or Ohio, or wherever. And then as it got more advanced, I'd talk to people in New York. But it's a big scene; there are a lot of people here. So location wasn't even the biggest factor in meeting other gay men. At the end of the day, I realized it would have to be new technology.

When the second-generation iPhone came out with the GPS unit and the ability to write and distribute the apps, all these things kind of came together. All the pieces fell into place and I said, "This is it."

Foursquare became famous for being able to track friends, and Dodgeball allowed you to see how you were connected socially (i.e., how many friends you had in common) to anyone else checked into a given space. How would you say Grindr is different from that?

Well, I'm not interested in helping you find your friends. I'm really interested in having you meet new people. It's like, "You and me, we're both here, let's get together and see if there is some kind of chemistry." There are so many invisible walls, and Grindr is really just a tool to break those down. I was just at New York Pride, and I met an Australian couple who said they had met over Grindr and they just got married.

Do you consider Grindr a dating app?

I'm less interested in what happens after you meet. Maybe you like them, maybe you just want to chat, and maybe you're like, "This is not for me, I want to get out of here."

If Grindr is at least partly being used to meet guys and hook up, how will this project you're launching work for straight women?

Well, this new app is an evolution: taking what we know from Grindr and putting it on the next level. It's not even focused on dating. Its code name is Project Amicus, and it's a lot more about friendship, like a girl meeting another girl, and they are both straight. Or she can meet a gay guy, or whatever. It's really about helping you meet people. There is that issue right now, of "How do I meet new people? Where should I go? What should I do? I'm bored!" And it's really a tool to help you figure that out.

Will Project Amicus be open to men too, then?

Yes, though we've spent a lot of time thinking about women when developing this project. I'm a guy; I have a harder time getting into the mind-set of a woman. We've definitely made extra efforts to think about the woman: what she wants, what she's comfortable with, who she wants to socialize with.

In terms of making a "Grindr for women," I think, "Well, isn't locating the nearest straight dude just called 'Going to a bar'?"

Right. Well, I still think of both programs in terms of someone who wants to meet new people, people they want to meet, that special someone, someone to spend time with.

So you don't think of Grindr as being focused on hookups or one-night stands?

I don't care what people do, as long as it's legal. You know, I'm happy people are using the program. It's a whatever-you-want-it-to-be app. Some people want to hook up, some want to network professionally. You know we did a survey, and the majority of people said they used Grindr to find friends. It's all kinds of things.

So if it's a friend thing, will Grindr's app feed its profiles into Project Amicus?

No. They are two separate apps.

So there is a distinction in terms of the purpose of what these two programs are supposed to do?

The new project is a social app. Grindr is somewhere between a geo-social app and a dating tool. People from Grindr can join the new project, but we keep them separate, because they are two different things.