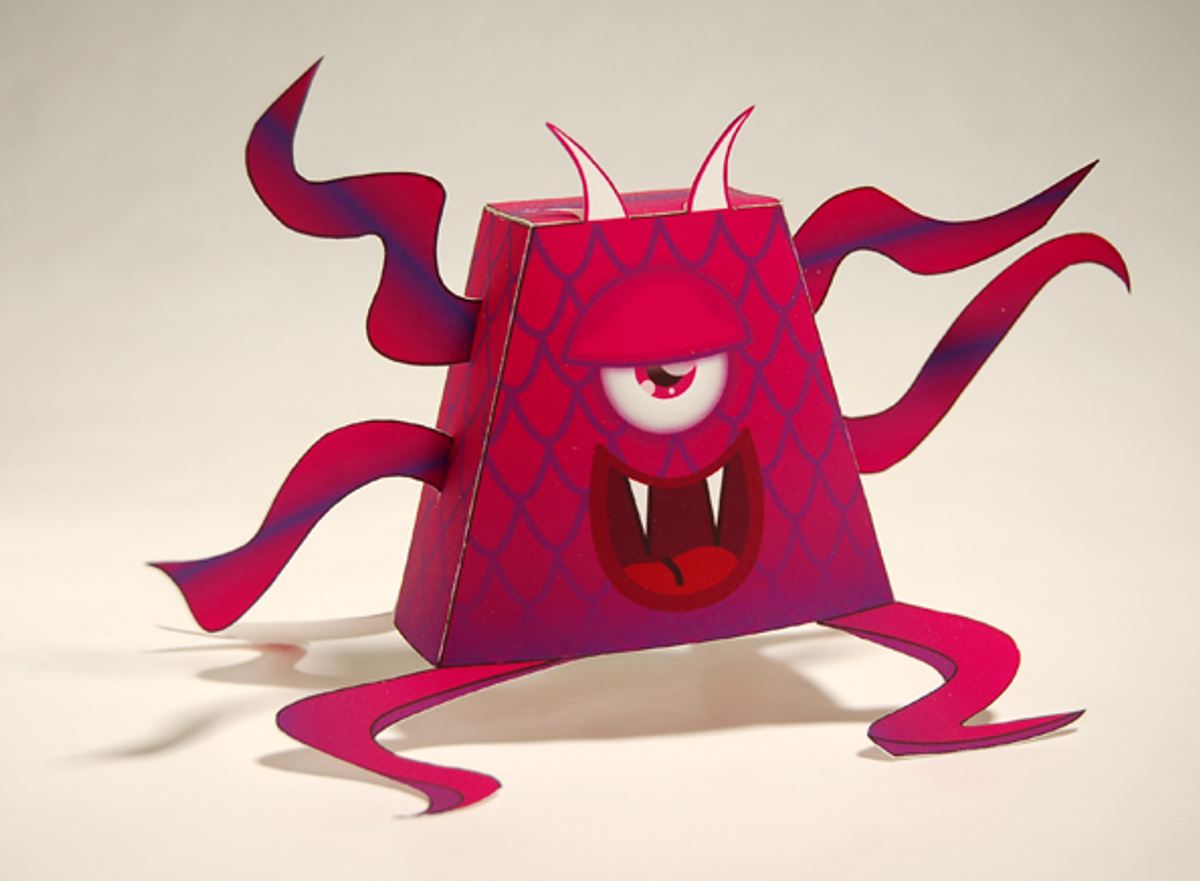 Who knew? Apparently making paper toy monsters is kind of a big deal to a certain small group of art and design enthusiasts. And like street art, break dancing, wrestling, or any other niche art groove, there are heroes, villains, elaborate story lines, and great names (not just of the monsters but of the designers themselves). Oh, and no small amount of nerd factor. I basically knew nothing about this -- is "movement" too strong of a word? -- but apparently like any hobby, it can be extremely addictive, so let that be a warning. I sat down with Garrison Beau Scott, aka baykiddead, a filmmaker, photographer, and now paper toy monster maker from Des Moines, Iowa, to hear more.

You recently started creating paper toy monsters with your kids as a way to kill time. Can you tell me how your hobby has grown from that?

I was introduced to the world of paper toys when my daughter and I were looking for something to do one rainy day a few years ago. I found the site for Readymech and we built three of the models, Skeletron, UK Johnny, and Tentaclopse. Then, I came across State of Shock Studios. They've done paper toy versions of Phish as well as Frank Zappa. That's when it clicked for me, and I started to search for what else was out there. One link led to five more, and then five more, and so on. Each site/designer offered up their paper toys for free. I literally stayed awake all night clicking and clicking, downloading template after template. Very addictive.

But at the time I had no ink for my printer, and couldn't justify spending $60 to make paper toys. Then I came across the wonderful book "Papertoy Monsters" from Workman Press, featuring 50 different monsters from 25 of the genre's best. The book makes it very easy to build the monsters. They're pre-printed on card stock and perforated, so it's pop-out, fold and glue. Repeat. The hard part is finding shelf space.

Soon I realized I was hopelessly hooked I was and I started to see how intertwined the community is. It was that revelation that led me to discover the practice of customizing someone else's design. The first was Nani? Bird created by Josh McKible. I submitted my custom, sailor.bird, and once I saw it posted on the site, and realized I'd made a (albeit very minor) contribution to the community, it was like adding gasoline to an already raging fire. It was only natural that the next step for me would be to design my very own toy, and that's when Fiendly the leechoso was born.

Boss Cyclops, a leechoso species of paper toy monster created by baykiddead and skinned by salazad.

Doze, a leechoso species of paper toy monster created by baykiddead and skinned by abz.

There appears to be a whole paper toy monster subculture. Can you talk about that a bit?

The subculture is one aspect I enjoy most about the art. As I said before, it's very inclusive. What stands out for me is the lack of competition. No one ever asks for anything in return, they just want to share, be it a design of their own, or a template they've collected that's disappeared.

Not every paper toy is a monster. In fact, most aren't. There's a whole bunch of sub-genres. One of the biggest is fanboy type stuff, paper versions of video game characters, anime, and cartoon characters.

How physically big are these toys? And, perhaps more pertinent, what do you DO with them? Are they primarily collectibles?

The toys range in size. The smallest in my collection measures just 1 ¾ inches and my tallest is almost a foot tall. But I've seen toys that stand over 4 feet, comprised of over 500 sheets of paper. That's another great thing about the medium, is that most of the designs are created in Illustrator as vector art and so they're scalable. As a builder, you're really only limited to the size of paper your printer can handle.

And yes, they're primarily collectible. However, there are some that have been created as desktop calendars, holiday ornaments, I have an iPhone cradle, and then there's the sub-genre of paper automata where either a crank or pendulum is incorporated into the design to allow for movement.

Chick Magnet, skinned by baykiddead, from the "Calling all Cars" series, designed by  horrorwood.

Whose paper toys do you most admire?

I have an emotional attachment to Fwis, who is responsible for the Readymech series. And then there's Shin Tanaka, the first designer that blew my mind with what he can do with a simple sheet of paper. Besides Shin, my favorites would have to be Matt Hawkins, Marshall Alexander, Dolly Oblong, Horrorwood, Guillain Le Vilain, Harlancore, salazad, Abz, Nick Knite, Marko Zubak, [MCK], Mckibillo, 3 eyedbear, Thunderpanda, Tougui, Cubeecraft, and PHIL. And that's just in the interest of space.

How much does a paper toy monster go for?

There are designers who've charged for their toys, but for the most part, they're free. I've paid for a few, but they really have to be special, or used as a fundraiser for an important cause. There are some who design toys for clients, usually with an advertising or illustrative angle. One of the more impressive examples I've seen was a newspaper robot featuring Rupert Murdoch  Matt Hawkins did for Newsweek.

But really, I don't think anyone does it for the money.

What does your daughter think of your new hobby now and does she still work with you?

Both my daughter and son have been bitten by the bug. They each have their own copy of "Papertoy Monsters" and it's fun to watch their collections grow. Every morning my son asks if I've made any new ones. If I say yes he hightails it to the studio to check them out. They know most of the designers just by looking at the toy. For my daughter's birthday, we threw her a paper monster-themed party where for one activity, all her friends were able to customize a template. They both have also designed their own toys, and it's awesome to watch the creative and analytical process take over. To be able to share this with them stokes me out beyond words.

What kind of paper do you use? What other materials do you need to create these?

The paper I use is a heavyweight matte paper; I like the way the surface takes the folds. You definitely want a thick card stock for structural integrity, but not too thick as some of the folds can get bulky. The basic tools (besides an Internet connection and printer) that I use are an X-Acto knife, straight edge, scissors, and glue stick. That's all you really need. But my process has evolved to include two other knives, a self-healing cutting mat, my library card, tweezers and a long thin paintbrush handle. I use one of the knives to score the folds, and the library card to make sure the fold is as crisp as possible. The other knife is used to apply the glue into a tight spot and the paintbrush handle and tweezers are used to get into the small places where my fingers won't fit.

How durable are they?

Durability can be an issue, it's paper and glue. As I'm discovering, heat and humidity aren't really kind to finished models, and living in Des Moines ... but the first three toys I made a few years ago are still standing, though a bit faded. I've resigned myself to the reality that most, if not all, will have to be re-made at some point.

How long does it take to make one of these monsters?

The time commitment can be a few minutes to a few hours, as far as the toys I've made. But the collector that built the 4-foot-tall Optimus Prime spent six months on it. I really enjoy starting something and finishing it in one sitting. It's the perfect union of my type-A desire to be as perfect as I can and my impatient side that wants to see it done and in my collection.

Where do you get your ideas?

When I decided to make the jump from collector to designer, I was fortunate to come across a posting on a great resource for the paper toy community. The site is called Nice Paper Toys and one member posed an at-large question, "How do you go about designing your toys?"

The two invaluable pieces of advice that came back were: Think of a toy you want but doesn't exist yet. Then make that toy. And the other was, always be on the lookout for inspiration, you never know where or when it'll strike.

I carry around a sketchbook now and use the camera in my phone to snap pictures of things I see that I'd like to incorporate into a design.

How long will you pursue the craft?

I'll stop when I no longer feel the three joys I associate with paper toys. There's a great satisfaction of the final touch, finished and sitting in your hand. The transformation from blank paper to piece of art is complete. And then there's the moment of placing it into the collection, sitting back taking it all in and the way it changes the whole. But the real joy is discovering a new template and the anticipation of building it. As long as I can fold, cut, glue, and get excited by form, I'll do it.