The motives of Bradley Manning 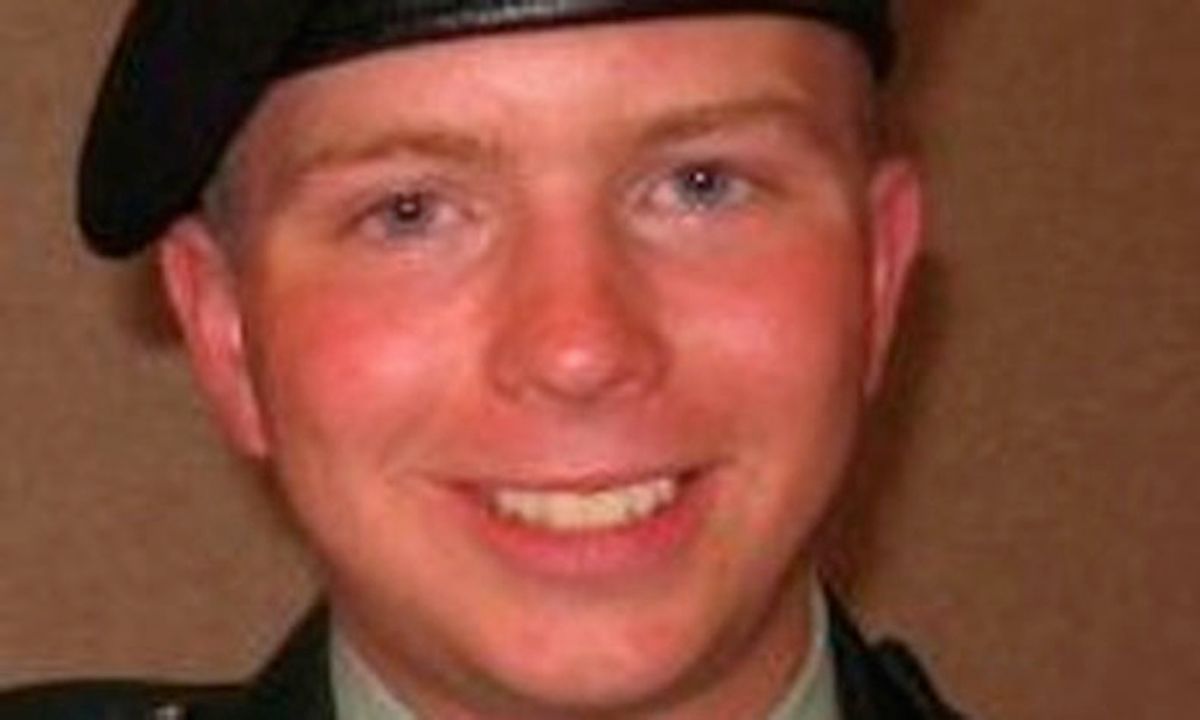 In New York Magazine, Steven Fishman has a lengthy profile of Bradley Manning that purports to shed new light on the accused WikiLeaks leaker.  The only aspect of Fishman's article that's meaningfully new is a series of chat logs and other online communications Manning purportedly conducted with Zachary Antolak, a 19-year-old gay web designer whom Manning befriended.  Though the article focuses on a variety of Manning's emotional struggles in a way that -- as is typical for whistleblowers or anyone who engages in acts of meaningful dissent -- is supposed to make you believe his alleged actions were the by-product of psychological afflictions, it actually achieves the opposite.

The emotional problems of loneliness and alienation Manning confronted are hardly atypical for a perceptive 20-year-old, particularly one with a long-estranged father dealing with issues of sexual orientation and gender identity who, after being raised in a tiny evangelical community in Oklahoma, finds himself deployed to Baghdad as part of the U.S. Army's brutal war in Iraq (the one who ends up looking truly psychologically unstable in this article -- and, as usual, deeply dishonest -- is government informant Adrian Lamo; see below).  What Fishman's article actually does is bolster the previous view of Manning's alleged leaks as motivated by noble and understandable horror at what the U.S. was doing in Iraq specifically and that region generally, and a resulting desire to take action to shed light on what he was seeing and to do what he could to stop it.

The highly edited chat logs purportedly between Manning and Lamo and previously published by long-time Lamo associate Kevin Poulsen of Wired already made clear why Manning -- if the chat logs are to be believed -- leaked these videos and documents.  In those chat logs, Manning described his growing realization of the evil of the the war in Iraq of which he was a part; he specifically recounted that his discovery that Iraqi "insurgents" rounded up and arrested by U.S. forces were actually guilty of nothing was explicitly ignored; and he explained that the documents he is alleged to have leaked revealed systematic deceit, illegality and exploitation on the part of the U.S. Government and its allied governments, and that only disclosure and transparency could trigger urgently needed reforms.  As Manning put it in those purported chats with Lamo when asked what he hoped to achieve:

hopefully worldwide discussion, debates, and reforms - if not, than [sic] we're doomed - as a species - i will officially give up on the society we have if nothing happens - the reaction to the [Collateral Murder] video gave me immense hope; CNN's iReport was overwhelmed; Twitter exploded - people who saw, knew there was something wrong . . . Washington Post sat on the video… David Finkel acquired a copy while embedded out here. . . . - i want people to see the truth… regardless of who they are… because without information, you cannot make informed decisions as a public.

The objectives Manning described there have, in a very short time, already been vindicated: the Baghdad video was viewed by tens of millions of people around the world, and even the anti-WikiLeaks Executive Editor of the New York Times, Bill Keller, has credited the release of the diplomatic cables allegedly leaked by Manning as playing a substantial role in triggering the revolts across the Middle East against mostly U.S.-supported despots.  Beyond that, so much of what we have learned about the world's most powerful factions over the last year has come from these leaks.  Those results, by themselves, mean Manning -- if he is the alleged leaker -- has done at least as much, if not more, to advance the causes of transparency, accountability, and freedom across the world than any single living individual.

The New York article adds more details to Manning's noble motives.  Like millions of people, Manning concluded that the war in Iraq, far from being a magnanimous endeavor to help the Iraqi people, was in fact an inhumane, monstrous act of aggression that indiscriminately killed huge numbers of innocent people; but unlike those millions of war critics, Manning decided to take action rather than remain passive:

For Manning, nothing was okay. In ­October 2009, he arrived at Forward ­Operating Base Hammer, a dusty back­water 40 miles from Baghdad. . . . Usually, there was a large central TV screen where an analyst could watch the war play in endless loop. You could zoom in on the raw footage from helicopters or even helmet cams. At times it felt like watching nonstop snuff films. . . .

An intel analyst sat at his work station and targeted the enemy, reducing a human being to a few salient points. Then he made a quick decision based on imperfect information: kill, capture, exploit, source. Any illusions Manning had about saving lives quickly vanished. At one point, he went to a superior with what he believed to be a mistake. The Iraqi ­Federal Police had rounded up innocent people, he said. Get back to work, he was told. . . .

He told the counselor about a targeting mission gone bad in Basra. "Two groups of locals were converging in this one area. Manning was trying to figure out why they were meeting," the counselor told me. On Manning's information, the Army moved swiftly, ­dispatching a unit to hunt them down. Manning had thought all went well, until a superior explained the outcome. "Ultimately, some guy loosely connected to the group got killed," the counselor said. To the counselor, it was clear: Manning felt that there was blood on his hands. "He was very, very distressed."

About that time, Manning later ­explained, "everything started slipping." Manning, it turned out, wasn’t built for this kind of war. "i was a *part* of something … i was actively involved in something that i was completely against." The job wore down lots of soldiers. Some survived by becoming desensitized -- the blood and death goes right past them. Manning took it personally. According to the government, it was in November 2009, the same month that he reached out to the gender counselor, that ­Manning began to work with WikiLeaks’ ­Julian ­Assange, "a candidate for the most dangerous man in the world," as Daniel ­Ellsberg, leaker of the Pentagon papers, later put it.

The notion that these reactions to wholly unjustified, massive blood-spilling is psychologically warped is itself warped.  The reactions described there are psychologically healthy; it's far more psychologically disturbed not to have the reactions Manning had. There are countless people who knew from the start, or who ultimately concluded, that the Iraq War was an act of supreme barbarism.  Many who so concluded -- especially among our political and media elite -- did nothing to stop it or bring accountability for those who caused it; Manning, by stark and commendable contrast, took action.  Which is the psychologically suspect behavior?  Manning was clearly motivated by the principle attributed by the New York article to Julian Assange, but espoused by countless heroic activists and philosophers throughout history: "Every time we witness an act that we feel to be unjust and do not act, we become a party to injustice."

The morality at play in the Manning persecution is mangled beyond belief.  It's perfectly conventional wisdom that the war in Iraq was an act of profoundly unjust destruction, yet normal, psychologically healthy people are expected to passively accept that there should be no consequences for those responsible (a well-intentioned policy mistake), while one of the very few people to risk his life and liberty to stop it and similar acts is demonized as a mentally ill criminal.  Similarly, the numerous acts of corruption, deceit and criminality Manning allegedly exposed are ignored or even sanctioned, while the only punished criminal is -- as usual -- the one who courageously brought those acts to light.  Meanwhile, Americans love to cheer for the Arab Spring rebellions -- look at those inspiring people standing up to their evil dictators and demanding freedom -- yet the American government officials who propped up those dictators for decades and helped suppress those revolts, including the ones currently in power, are treated as dignified statesmen, while a person who actually exposed those tyrants and played at least some role in triggering those inspiring revolts (Manning) rots in a prison after enduring 10 months of deeply inhumane treatment.

There's no doubt that it's illegal for a member of the military to leak classified or secret documents -- just as there was no doubt about the illegality of Daniel Ellsberg's leaks, or a whole slew of other acts of civil disobedience we consider noble.  The fact that an act is legal does not mean it is just, and conversely, that an act is illegal does not mean it is unjust.  Many people enjoy hearing themselves condemn the acts of tyrants and imperial forces in the world. If the allegations against him are true, Bradley Manning knowingly risked his liberty to take action against those acts, in the hope of exposing those responsible and triggering worldwide reforms.  It's hard to dispute that these leaks achieved exactly that, but even if they hadn't, his conduct is profoundly commendable, and the world needs far more, not fewer, Bradley Mannings.

Adrian Lamo has no relevance either for the Manning case or anything else, but just to underscore how thoroughly unreliable and deranged he is -- that, as I've documented repeatedly before, what comes out of his mouth at any given moment is designed exclusively to generate attention for himself and bears almost no relationship to reality -- just contrast what he's quoted as saying about Manning in this New York article with what he told me in an interview last year:

When Lamo was arrested, he’d been offended by the government prosecution-- “criminalizing curiosity," he called it. Now he was offended by Manning. "He's a traitor at best," Lamo said. . . . He was disgusted by the way in which Manning conflated his own precious moral awakening with the future of U.S. diplomacy. The leaks could “compromise our ability to make the world a better place, which we do in a lot of ways,” Lamo later said.

GREENWALD: Do you consider Bradley Manning to be a traitor? I had seen you use that word in a couple interviews that you did.

LAMO: Can you cite one so I can double-check and make sure it's a direct quote?

GREENWALD: Yeah. I think the quote was, "I’m not a traitor, and I wasn’t going to harbor a traitor." And it was unclear, I mean, the context was you were asked why. So I didn’t know if you meant that, that’s why I’m asking in an open-ended way, regardless of what you’ve said in the past: Do you think he’s a traitor?

LAMO: Well, in that case, I regret that statement. I don’t think he's a traitor. I think. He did something not too different from what I did: break the law to accomplish what he believed to be a good purpose, and I apologized to a judge in tears for that, and I would be a hypocrite if I didn't still believe that it was wrong now.

There are many people in this case whose actions are disturbed, twisted, and unjust.  Bradley Manning is most assuredly not one of them.