The N.Y. governor may have legalized gay marriage, but he's actually a deep-seated economic conservative 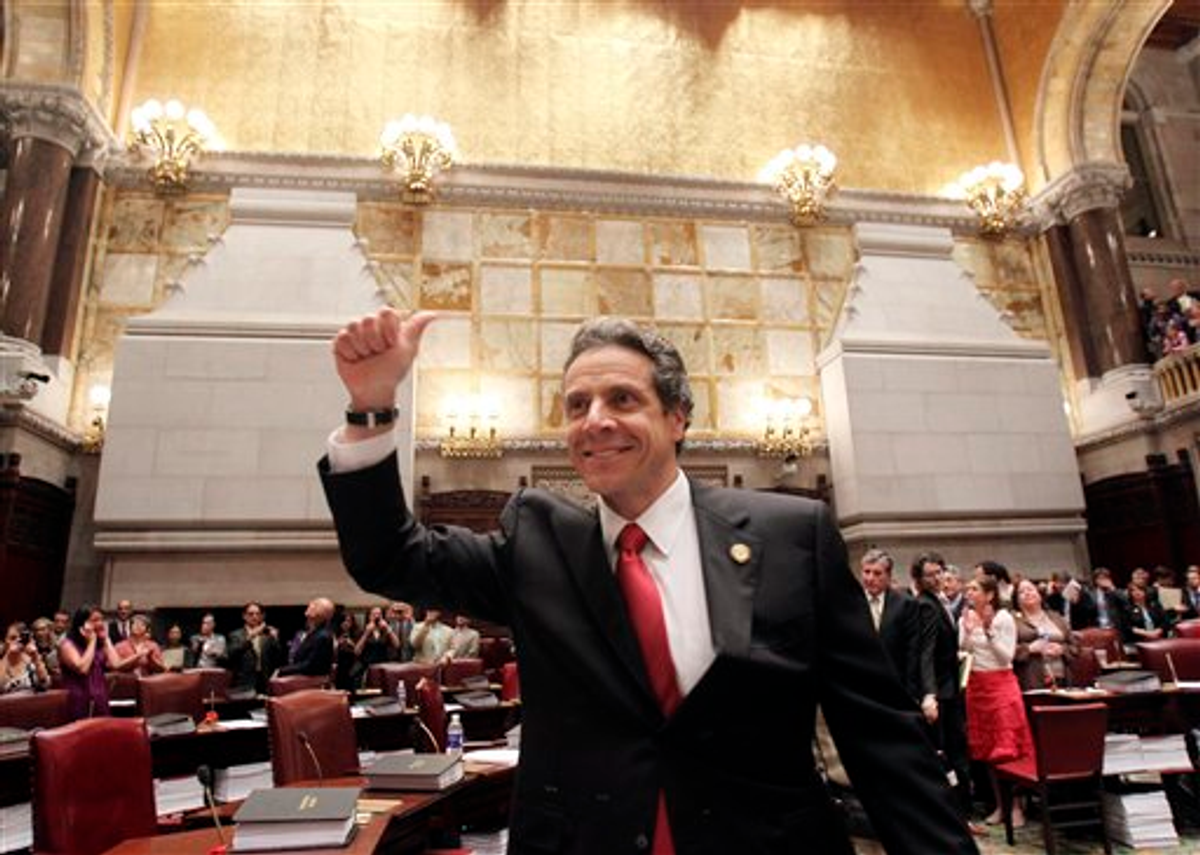 New York Gov. Andrew Cuomo reacts after same-sex marriage is legalized after a vote in the state Senate on June 24.
--

After signing a bill legalizing gay marriage, New York Gov. Andrew Cuomo is being hailed -- and is hailing himself -- as the new progressive standard bearer for the Democratic Party. A former Clinton administration staffer who now heads a gay rights group calls Cuomo "the most important progressive leader of our party" while the governor is quoted in a Maureen Dowd column declaring himself an "aggressive progressive."

But there's just one problem with all the hullaballoo: When Andrew Cuomo's record is evaluated as a whole, it's clear that his tolerance on social issues combined with his lockstep corporatism on economic issues makes him not some proud representative of the "Democratic wing of the Democratic Party," but rather what is typically called a standard-issue Northeastern Republican.

Unlike Dean, who gradually renounced the New England Republicanism that often marked his Vermont governorship, and unlike Mario Cuomo, who rarely ever backed away from progressive economics, Andrew has championed a cookie-cutter economic conservatism that's almost indistinguishable from Northeast Republican governors like Chris Christie of New Jersey.

So while wealthy elite columnists like Maureen Dowd insist that Cuomo has created a "Utopia on the Hudson" and as former Clinton administration officials tout him as the Democrats' 2016 presidential standard-bearer, on kitchen-table blue-collar economic issues that these elites never have to worry about, Cuomo is governing the most economically unequal state in America as a devoted arch-conservative. Indeed, so far to the right is Cuomo on these economic issues that billionaire and sometime Republican Mayor Michael Bloomberg is publicly reaming the governor for his budget proposals.

No doubt, Cuomo is thrilled about the reaction to his brand of Northeastern Republicanism; after all, if he has created a "utopia on the Hudson," it is most certainly a political one for himself. With his economic policies, he gets to coddle corporate interests for the purposes of raising future campaign cash. Meanwhile, his position on social issues lets him tell Democratic voters that he's a great liberal champion because he supports gay marriage -- a cause that's perfect for his formula because it doesn't offend, challenge or economically undermine his corporate benefactors in any significant way. In the end, Cuomo comes out of the whole transaction looking like some sort of brave and innovative "independent."

Cuomo, a lifelong politician, knows that the elite New York media and donor class, a group dominated by the very wealthy, will help him with this sleight of hand. He realizes, for instance, that the New York elite media that trumpets him as a great liberal for his gay marriage position will largely ignore the fact that, like a hard-core energy-patch Republican, he bowed down to the fossil fuel industry just days after the gay marriage bill was signed.

In short, Cuomo knows that many of the wealthy elites who control our political discourse define acceptable blue-state "liberalism" as the standard Northeastern Republicanism of "social liberalism and economic conservatism" because that serves that elite's specific cultural and financial self-interests.

As former longtime New York Democratic legislator Richard Brodsky writes, this is all part of a grand strategy -- and one with significant downsides for the cause of economic justice (emphasis added):

[Cuomo's strategy] is shrewd and insightful -- maybe. He has adopted the economic policies of the Right, but is aggressively supporting the liberation and identity struggles of the Left. He is carefully courting the leaders of New York's many religious, ethnic and language minorities, and has made enactment of a gay marriage bill a top priority.

Cuomo exercised considerable muscle to get it done, with Democrats falling in line and Republicans preparing to trade enough votes for other things they want. He's betting that a true human rights victory, and an important one, will allow him to reclaim the liberal mantle his father fashioned and wore for so long, no matter what his economic policies are.

To put it in the Wall Street terms that Cuomo and other super-rich New Yorkers can understand, the governor is essentially shorting the Democratic Party base, betting that it's too disorganized, too stupid or too gullible to see what he's up to.

To be sure, gay marriage is a hugely significant progressive cause, and Cuomo's signing of New York's gay marriage bill was a big progressive victory (though certainly not an act of great political courage for a Democrat in a blue state where polls show strong support for gay marriage). And make no mistake, Cuomo's political strategy mixing social liberalism and economic conservatism may be a shrewd electoral tactic. After all, he's operating within a Democratic Party that, according to polls, largely supports a Democratic president who has perpetuated and often expanded Republican wars and civil liberties policies all while giving away the store to Wall Street. So he's certainly making an informed wager.