The pop star might be a top-selling artist when it comes to music, but put him in print and he fails to find sales 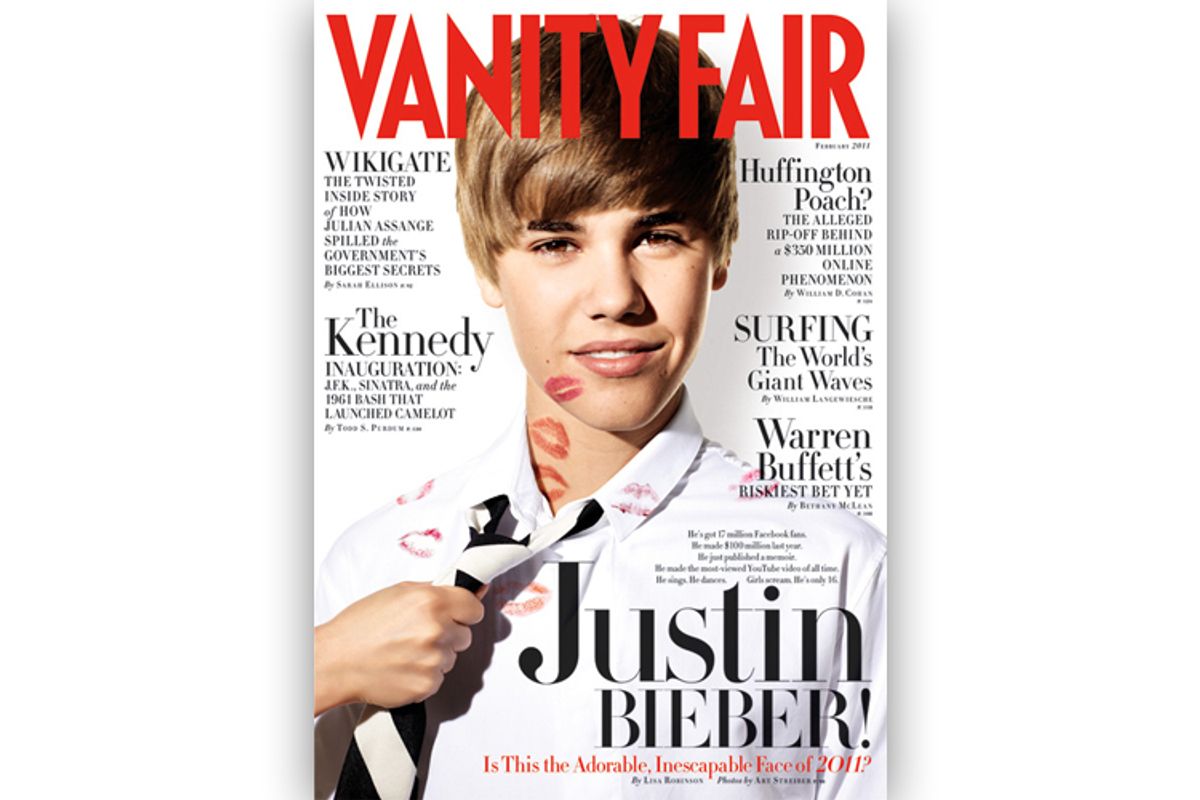 Bieber not so beloved of readers.
--

Back in February, Justin Bieber caused the media news cycle to capsize when he spoke to Rolling Stone magazine about his views on abortion and universal healthcare. He was against the former and pro the latter ... something which kind of makes sense when you realize he was raised by a religious Canadian teen mom.

But while Bieber's statements caused a backlash so intense that he had to cut his hair in penance, it's unclear how many people  picked up the offending issue. Though Wenner Media has yet to release its 2011 newsstand sales, Justin's Vanity Fair cover (also in February) sold only 246,000 copies, making it the lowest-ranked issue of the Condé Nast publication in 12 years.

Now, there's an argument to be made that Vanity Fair's audience of Christopher Hitchens fans and Maureen Orth aficionados doesn't overlap much with the screaming tweens that lip sync to "Baby" on YouTube. But its not just Vanity Fair editor Graydon Carter who has felt the Bieber dip: Teen Vogue and People both saw substantial drops in single-issue sales when they put the pop star on the cover, and ostensibly those readers would be Bieber's fan base. If teens are reading Teen Vogue (and who else would be?), why would a Justin cover cause a sales slump?

Personally, I thought the Vanity Fair interview was fascinating: That's the one where Bieber tells Lisa Robinson about his desire to drop LSD before a concert (he's joking!), his obsession with Michael Jackson (he's not joking!), and chronic insomnia. Then again I, like most of Bieber's Internet-savvy fans, read the article online and passed it around to my friends without ever paying a cent.

So was it simply hubris for Carter to put a 16-year-old (at the time) covered in smooches on the cover of Vanity Fair? Depends: The other "worst selling" issues of the magazine had giant movie stars like Will Smith and Harrison Ford gracing the front page during their prime star years. Meanwhile another tween celeb, Miley Cyrus, managed to have one of the best Vanity Fair covers of the year when she drummed up controversy in 2008 with some scandalous Annie Leibovitz photos.

So does this prove that Justin Bieber is just one more "final nail" in old media's coffin ... which is already so full of "final nails" it's almost surprising there is even room for another? Or could there be another explanation for the lack of interest in Bieber interviews?