So much for Obama's Jewish problem 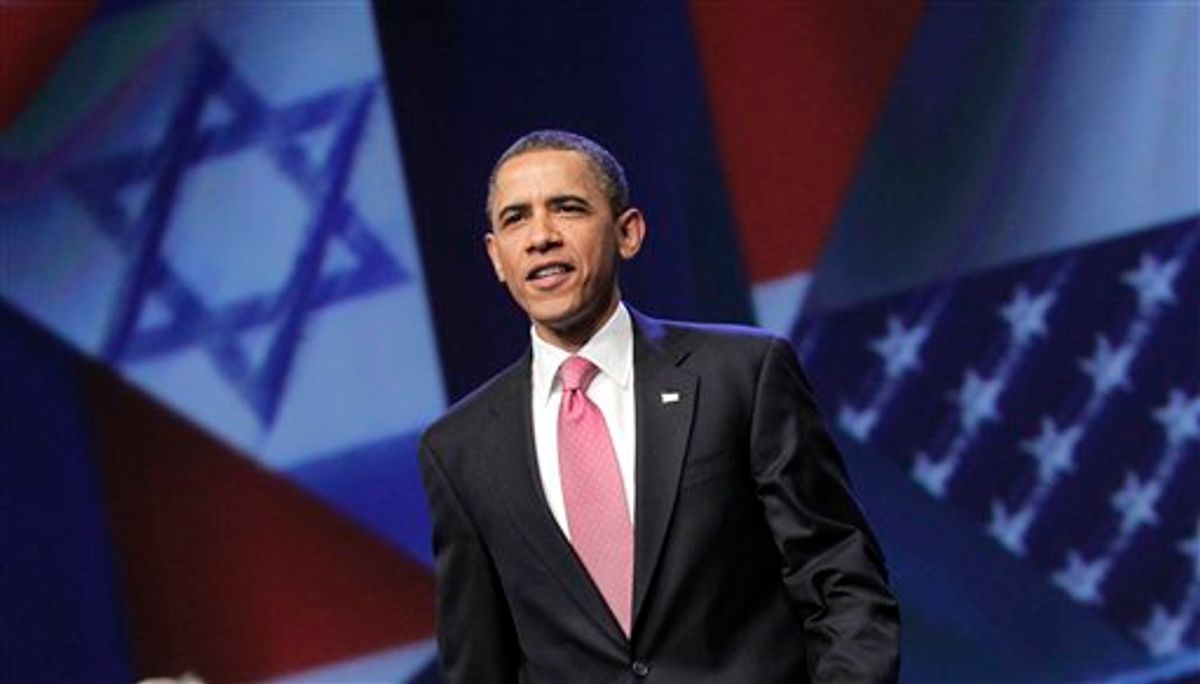 President Barack Obama arrives to speak at the American Israel Public Affairs Committee (AIPAC) convention in Washington, Sunday, May 22, 2011, after a contentious couple of days this week when he clashed publicly with Israeli Prime Minister Benjamin Netanyahu over ideas for a permanent Palestinian state. (AP Photo/J. Scott Applewhite) (AP)
--

A slew of stories speculating that Obama had lost Jewish support followed the president's May speech on Israel. A new Gallup poll, however, shows that Jewish faith in Obama has barely waned at all since he made the controversial (largely misread) remark that a basis for Israeli/Palestinian negotiations should be based on 1967 borders.

Jewish Americans gave President Barack Obama a 60 percent job approval rating in June, down from 68 percent in May, but statistically unchanged from 64 percent in April. Thirty-two percent of U.S. Jews now disapprove of the job Obama is doing, similar to their 30 percent average thus far in 2011.

The poll also illustrated that the drop in Jewish approval of Obama since 2009 follows the decline in the president's approval ratings across the country generally -- there is not, according to the data, a particularly Jewish drift.

Gallup's Lydia Saad notes that the poll's findings run contra to conclusions drawn by Politico's Ben Smith in his article last week, "Obama May Be Losing the Faith of Jewish Democrats." Based on conversations with Jewish Democratic donors and supporters, Smith notes:

Obama’s speech last month seems to have crystallized the doubts many pro-Israel Democrats had about Obama in 2008 in a way that could, on the margins, cost the president votes and money in 2012 and will not be easy to repair.

The new poll suggests that the speech did not dramatically decrease Jewish support for the president. However, as Politico's Smith noted Tuesday, "I'm not sure why Gallup feels confident concluding there was "no significant nor sustained shift" when the article says it's based on samples too small to detect one" (roughly 500 adult Jewish Americans were interviewed for the poll).

The poll aside, other factors point to not talking rumors of Obama losing Jewish support too seriously. As Paul Waldman wrote on the American Prospect "Tapped" blog:

We've been hearing this ever since Obama became the Democratic nominee in 2008. Jews don't trust him! He had Palestinian friends! There's that Reverend Wright! Here's an article from May 2008: "As Obama Heads to Florida, Many of Its Jews Have Doubts." And guess what: Obama won 78 percent of Jewish votes anyway. John Kerry got 74 percent in 2004, and Al Gore got 79 percent in 2000. In other words, Obama did pretty much exactly as well as other Democrats.

But Smith is right to emphasize that disapproval of Obama does not equate to abandoning the Democratic Party, or even not voting for Obama in 2012. "Many of the Jewish Democrats who expressed doubts to me also said they were unlikely actually to jump ship as the choice [of candidates for 2012] becomes clearer," he wrote.