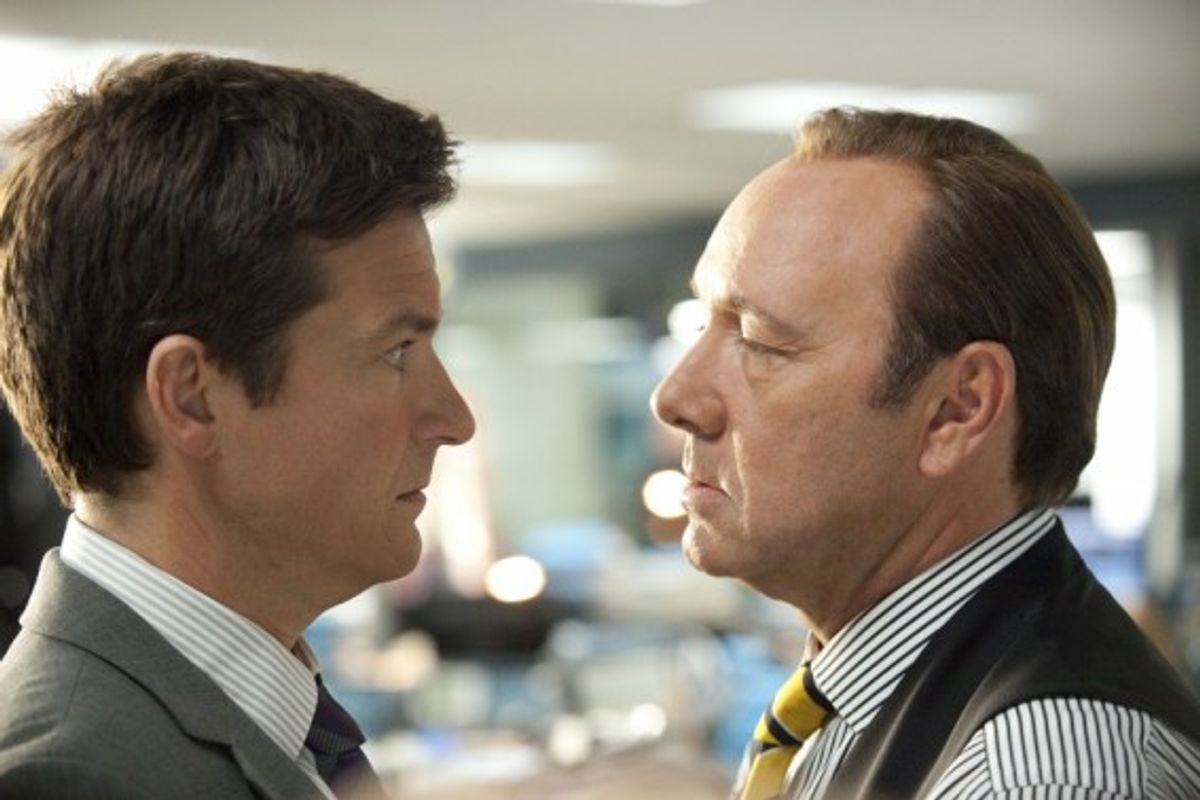 As inconsequential and virtually indistinguishable sub-Judd Apatow white-boy comedies fueled by prison-rape gags and pants-pissing anxiety around black people go, "Horrible Bosses" is pretty solid entertainment. Did you notice how I adjusted the bar there? It actually took a female colleague to nudge me gently toward the glaringly obvious fact that "Horrible Bosses" recycles its plot from the 1980 hit "Nine to Five" with the feminism drained out of it, which is to say its entire reason for existing is gone. "Horrible Bosses" has no meaning or purpose whatever, but it does have Colin Farrell with a bad comb-over, Kevin Spacey acting really mean and Jennifer Aniston as a spray-tanned sex maniac, and that's going to have to do.

I get complaints from some of you when I go off on irrelevant tangents about the Decline of Culture and the Meaninglessness of Everything that really don't have anything to do with some very nice, very rich people from Los Angeles who are working as hard as they can to make the same movies over and over again that you may laugh. In recognition of those nice people and our shared admiration of their labor, let's divide this review into useful and nonuseful portions. Here's what you need to know: "Horrible Bosses" is a lot funnier in theory than in practice, but it won't ruin your Saturday night. As the trio of put-upon nitwits who decide to rid the world of their respective employers, Jason Bateman, Charlie Day and Jason Sudeikis have an enjoyable and effortless comic chemistry. They even seem to like each other, and whether or not that's faked it's a key element of ensemble comedy. The cast of "The Hangover Part II" seemed massively irritated with each other's company the entire time, and the bad vibes between Robert Downey Jr. and Zach Galifianakis in "Due Date" permeated the entire production with a funky, bad odor, like bong-water and old socks mixed with spoiled sweet-and-sour chicken.

It's a very good thing that those three guys cutting up, mocking each other and getting into embarrassing scrapes is fun to watch, because the script they're reading (credited to Michael Markowitz, John Francis Daley and Jonathan Goldstein) is miscellaneous nonsense, and implausible even by the standards of who-cares Hollywood absurdity. To me, Bateman is the star here as much as he was opposite Aniston in last summer's mediocre rom-com "The Switch," where he totally stole the show. He never overplays even the stupidest comic situation, delivers a deadpan comeback with the best of them, and never compromises his basic likability. He plays Nick, a financial professional who's way more successful than his buddies but is being sadistically strung along by Dave Harken (Spacey), his manipulative, micro-managing boss.

If Spacey starts out deliciously, in full-on flaming-driven-asshole mode, before Dave dissolves into an unconvincingly dumb cascade of evil, Farrell and Aniston's horrible bosses never remotely resemble real people. Maybe that's not a bad thing in itself; it's not like director Seth Gordon (who made "Four Christmases," along with episodes of "The Office," "Parks and Recreation" and "Breaking In") is pushing toward ruthless realism in this relentlessly sitcommy picture. Farrell plays a cokehead degenerate who's using the small-time chemical company where Kurt (Sudeikis) works as his personal ATM, and that's a whole bunch of shtick that never goes anywhere.

Aniston, as you may have heard, plays a leggy dentist with a fetching brunette 'do and a deep stem-to-stern studio tan who craves a little personal attention from Dale (Day), her nerdy, nervous assistant, and won't take no for an answer. There are so many things to say about this that I don't know where to start, but, oh yeah, we're still supposed to be in the useful portion of the review: Aniston might not seem like an automatic choice for this kind of slutty, man-eater role, but she's ingratiating, funny and medium-sexy, and seems to enjoy herself far more than she ever has playing an anxious, boring sweetheart in romantic comedies.

That said -- and here's where we cross into nonuseful territory -- Aniston's psycho-bitch DDS character is just one of the countless ways that "Horrible Bosses" flirts with troubling or forbidden subject matter while still reassuring its youngish male target demographic as to their masculine coolness. Of course it's possible for a female boss to sexually harass a male employee. In fact, I'm sure it has happened -- in, like, 0.1 percent of harassment cases -- but the perpetrator has rarely (or more likely never) resembled Jennifer Aniston. I hardly need to point out that mainstream filmmakers aren't going to cast a fat woman or a much older woman or a woman who isn't conventionally attractive in that role, because it wouldn't be titillating and it would make them look like sexist creeps. In fact, Aniston's character in "Horrible Bosses" goes well beyond unethical or inappropriate conduct into felonious sexual assault, but it all stays within the realm of comedy because A) it's ridiculous and B) she's hot.

I suppose it's true that Nick, Kurt and Dale hatch a homicidal plan, only it's more like they have a bunch of Three Stooges misadventures on the road toward having a plan, which involve Kurt sticking a toothbrush up his butt while the other two accidentally ingest loads of cocaine. They also travel into a scary neighborhood (i.e., one where African-Americans live) and meet a guy with a shaved head, prison tattoos and a pseudo-intellectual goatee whose name is Motherfucker Jones (Jamie Foxx). It's a throwaway role for Foxx, but he gets to play a racist caricature and subvert the white boys' instinctive racism at the same time, while delivering life lessons drawn from Hitchcock's "Strangers on a Train" and the 1999 Ethan Hawke vehicle "Snow Falling on Cedars." ("I love that movie!" Sudeikis says brightly.)

This tiptoe-dance around racial attitudes is reflected in the film's attitude about homosexuality, which is to dude comedy as that big-ass iceberg was to the Titanic -- disastrous but also irresistible. (I won't spoil a weird cameo appearance by Ioan Gruffudd, but it's definitely on topic.) Sudeikis' character is supposed to be an inveterate lady-killer who bags any chick he wants (which doesn't seem likely, but never mind), but he catches himself checking out another guy's butt in a big-box store, and becomes embroiled in a running debate with Bateman's character about which of them will be more "rape-able" if they end up in prison. This is at least the fifth guy-comedy I've seen in the last year to mine the ever-hilarious topic of prison rape for laughs, and in its own screwy, accidental way maybe "Horrible Bosses" is taking on the ambivalent, narcissistic quality of post-metrosexual masculinity. No self-respecting straight guy wants to go to prison and become somebody's bitch (except for the protagonist of David Mamet's "Edmond"), but it would be even worse to go to prison and be ignored.