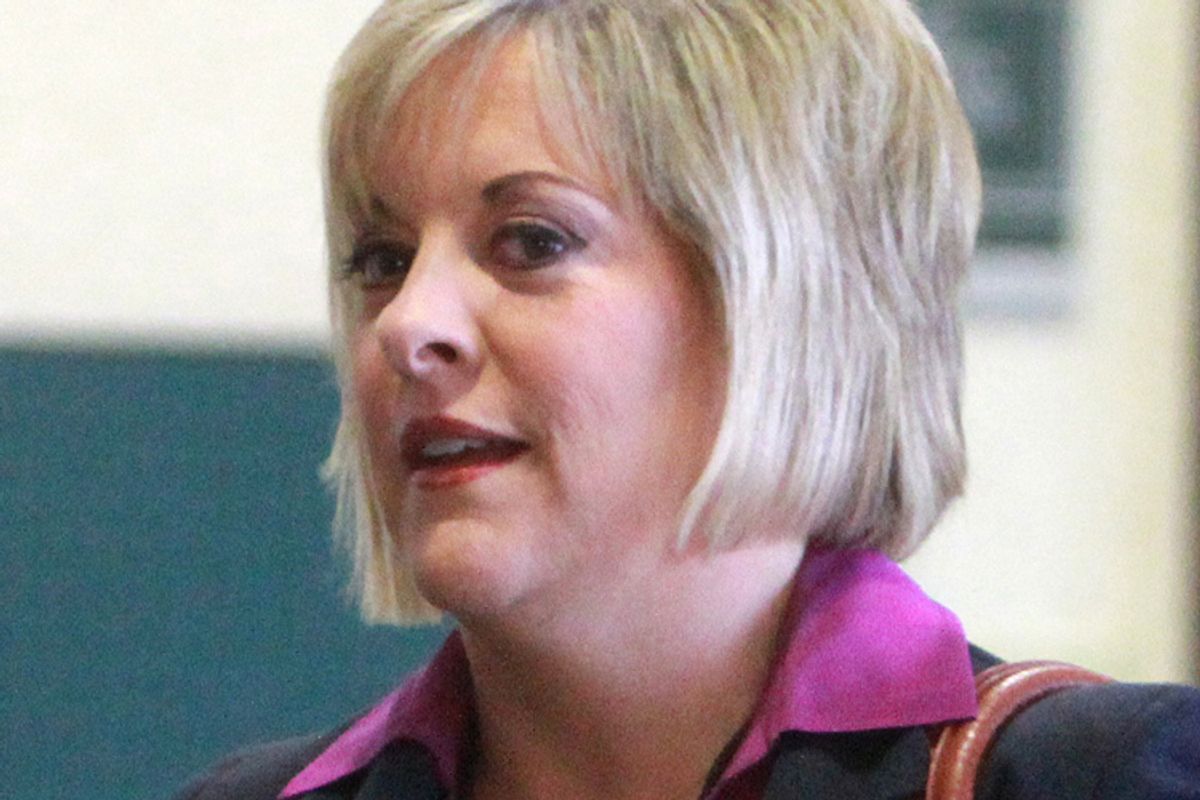 Nancy Grace is never wrong. Just ask Nancy Grace. The spitfire talking head, whose main job the past three years appears to have been hashing out the gruesome details of Caylee Anthony's death on a nightly basis, has made no secret of what she thinks happened to the child and who she believes is responsible – the woman she dismissively refers to as "Tot Mom."

So when a Florida jury delivered a verdict of not guilty on the charges against Casey Anthony of murder, manslaughter and child abuse, Nancy Grace was not having any of it. On her show Tuesday, she made it clear again what she believed should have happened. "I absolutely cannot believe Caylee's death has gone unavenged," she said. "Now I know, it is our duty as American citizens to respect the jury system .... But I know one thing, as the defense sits by and has their champagne toast after the not guilty verdict, somewhere out there the devil is dancing tonight."

It's not the first time Grace has made up her mind about where guilt falls. Five years ago, Melinda Duckett, a 21-year-old mother of a missing child, appeared on Grace's show. During the interview, Grace interrogated the woman, "Where were you? Why aren't you telling us where you were that day?" The next day Duckett shot herself to death, prompting Grace to drawl to "Good Morning America": "I would suggest that guilt made her commit suicide. Long story short, Trenton Duckett is still missing, and now police are agreeing with me." A court, however, did not, and last year Grace settled a wrongful death suit Duckett's family brought against her for $200,000.

Yet Grace just keeps opinionating. During the Duke lacrosse case five years ago, Grace was vehemently pro-prosecution and flippant in her depiction of the defendants, noting, "I'm so glad they didn't miss a lacrosse game over a little thing like gang rape." All three were eventually pronounced innocent of the charges, and lead prosecutor Mike Nifong was disbarred for ethics violations. The evening the charges were dropped, a substitute host conveniently delivered the news on Grace's show.

And now, Grace is continuing to behave in an entirely Nancy Grace-like manner, i.e., refusing to accept any outcome other than the one she'd imagined and smearing everyone in her path. When asked on Wednesday's "Good Morning America" if she felt she'd engaged in character assassination, she told George Stephanopoulos, "I hardly think anyone was assassinated here except for Caylee ... I told the truth. Am I taking the heat for it? Yep. Is that going to make me stop looking for missing children and trying to solve unsolved homicides? No. I'm not going to let some kooky jury stop justice." How dare a court of law not go along with Nancy Grace's verdict! Don't those people watch TV? Don't they know Nancy Grace just cares about the children?

Whatever you or I may think of the case, the fact remains that a "kooky jury" found Anthony not guilty, which means that Anthony now has, among other things, the right to not be excoriated by a two-bit character assassin like Nancy Grace.

Yet in Grace's avenging world, her ironclad interpretation of events trumps anyone else's – it even, as in the case of the Duke trial, trumps the eventual illumination of the facts. She talks about speaking the truth, yet weaves elaborate fictions of a champagne-popping defense team, a story in which "Tot Mom is going walk out of jail probably tomorrow and she's probably going to get a million-dollar book deal and maybe a quarter-a-million dollars for 'licensing fees' for photos and she's going to be living on easy street, living the sweet life that she's got tattooed on her back." Grace's version of "truth" is what the rest of us like to refer to as "imagination."

She said on her show Tuesday, "In the end, Tot Mom's lies seemed to have worked." But what really infuriates Nancy Grace is that hers didn't.