Gingrich is toast. Pawlenty's sinking. Still no Palin. Could it really come down to Romney v. Bachmann? 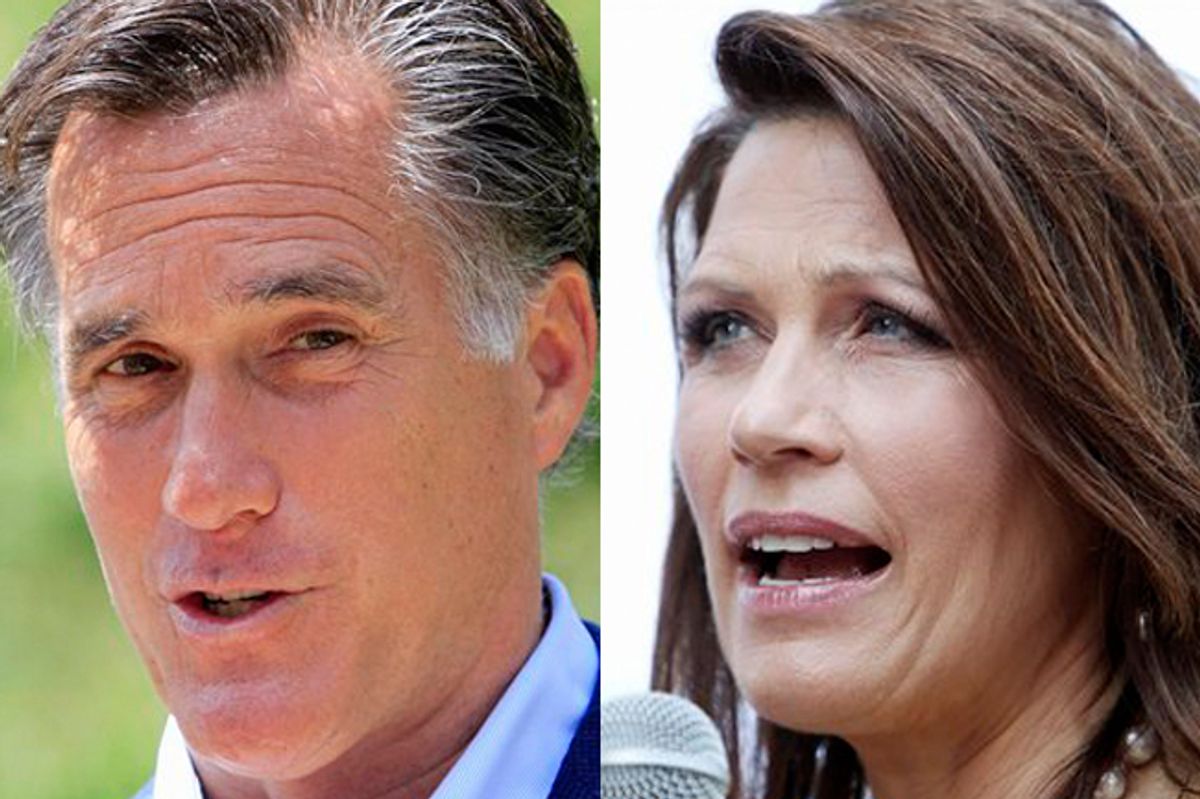 Sure, it's still early, but the outlines of the GOP field are getting clearer. Newt Gingrich, the one-time history professor, is history. His campaign debt alone will sink him; no need to bring up his large lines of credit at Tiffany's. Steve Kornacki says the campaign of the struggling charisma-challenged Tim Pawlenty "smells like death," which is going to be one of those disturbing images that sticks around for a while, even if Pawlenty's bid stays alive. Rick Santorum is a joke, Herman Cain has Iowa staff problems and zero foreign policy knowledge. Beltway favorite Jon Huntsman didn't make the splash people hoped. Once again libertarian Ron Paul, who is raising money and polling respectably, will likely stay in the race for the long haul, making sure our bipartisan and still belligerent foreign policy gets attention.

With second quarter fundraising numbers in, it's clear Mitt Romney remains the front-runner, crushing his rivals in the money primary. But even he came in second to the Mitt Romney of 2008, who raised $23.5 million in this quarter last time around. With $18.5 million, Romney far outstrips his rivals, but lagging behind where he was in 2008, in a race he didn't ultimately win, can't be encouraging. Can this really wind up as a race between Michele Bachmann and Romney?

The lesser-known Bachmann is "surging" in New Hampshire polls, finishing in second place (although how close she is varies with the poll). That reflects Romney-fatigue and excitement about a new face on the scene. Although people like to say Bachmann is the candidate Sarah Palin was supposed to be, had she studied up on the issues and stayed governor, that's not a high compliment. Neither woman can be president. Bachmann may keep a solid base of social conservatives, but Ron Paul will fight her for the official Tea Party mantle. And the more voters, even GOP primary voters, know about her extremism, the less viable she will be. Her "gay-curing" husband's hateful comments about gay people being "barbarians" will alienate all but the fringe that agrees with him.

I talked about the 2012 GOP field today on MSNBC today with Richard Wolffe and Rev. Al Sharpton. Wolffe thinks the field is so weak someone else will almost certainly jump in, someone who can afford to wait until late in the primary season, and that would point to the well-known (and widely disliked) Palin. But I just don't see Palin running. She bailed on her "One Nation" tour half-way through; she doesn't like shlepping from city to city and answering questions from reporters. Why would she leave the comfort of her climate-controlled Fox studio and the safety of her Twitter and Facebook accounts to engage with real world voters or media? The Beltway certainty that the weak GOP field requires someone else to run reminds me of 2008, when pundits said the same thing and banged the drum for…Fred Thompson. We all remember how that went over. But it's still early.

I'm starting to think that if he survives, Romney is the only one of the declared and undeclared GOP contenders with a chance to beat Obama. The country is scared, but it isn't crazy, and most voters will reject extremists like Bachmann, faux-leaders like Palin and the secession-loving Texas Gov. Rick Perry (someone else pundits and some Republicans hope will get in.) But if the economy is still in a ditch, Romney's soothing bromides and storied private sector experience might get a second look. Although his relatively moderate record as Massachusetts governor, particularly his role in the state's health insurance reform, is a drawback in the primary, it would be a selling point in the general election. This GOP field can't beat Obama, but the economy can.

Here's our conversation on MSNBC: