Henry Winkler on comedy, fishing and jumping the shark

The Fonz talks about his new career as a writer, director and comedy actor 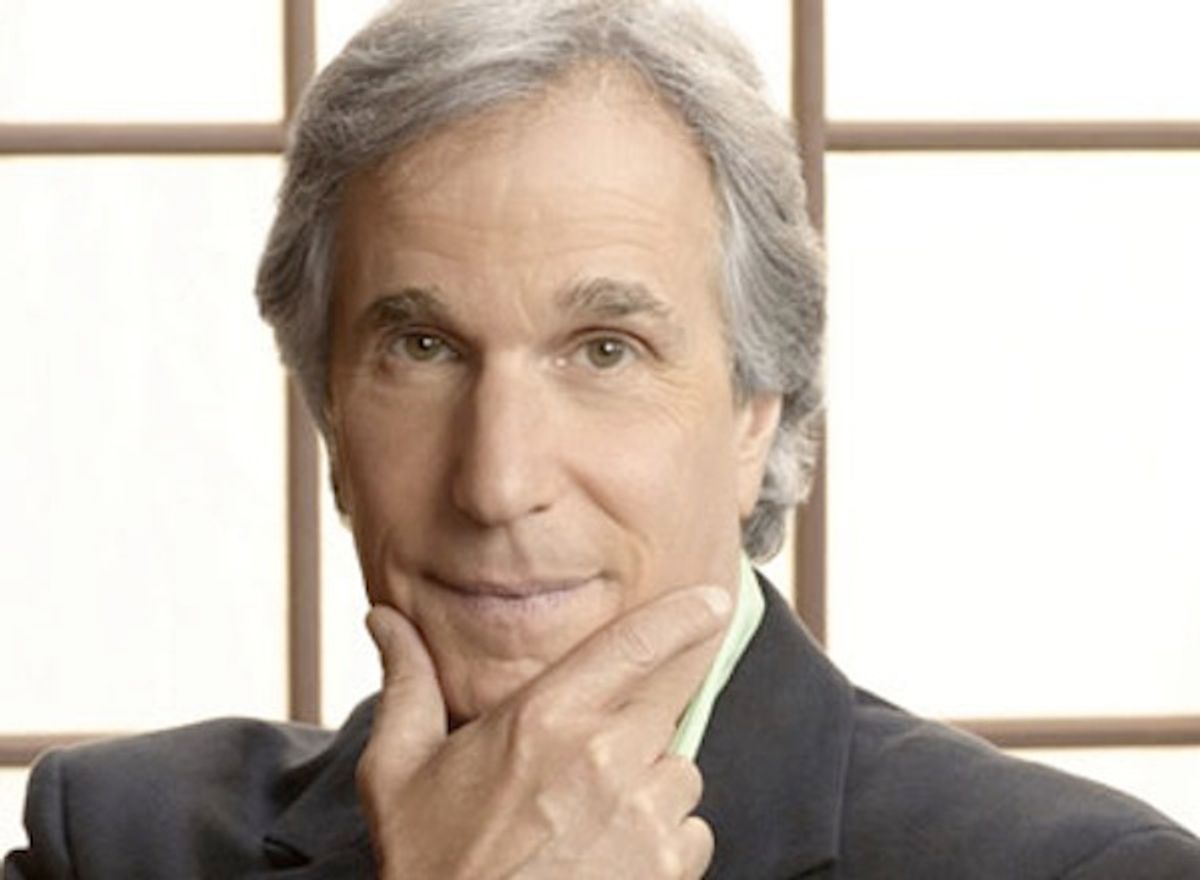 Henry Winkler is the Fonz. Obviously. But over the last decade, the man who literally defined "jumping the shark" has made a comeback as a completely different type of character: playing the feckless Barry Zuckerkorn on "Arrested Development" and the equally clueless director on "Children's Hospital." He's also had scene-stealing cameos in "Scream," "The Waterboy" and "Little Nicky," as well as writing his own line of children's books about a boy named Hank Zipzer.

Winkler's life now is much different than the Fonz's. His book about fly fishing is currently on the New York Times bestseller list, and when I talk to him over the phone, he has to whisper to not wake up his granddaughter. Here's how the coolest guy on TV became one of the most grounded, funny men in show business.

"Children's Hospital" … how did you get involved with that?

Rob Corddry asked me, and I said yes. You know how you have a conversation about something, and it smells right, or it doesn't?

It just feels right. I am so grateful I said yes.

Would you say the show is in the same comedic vein as "Arrested Development"?

It's a little bit different, but it's as irreverent. To me, it is hysterical anarchy.

That's a great way of putting it. Let's talk a little bit about that anarchy for a second: Going through your roles over the last decade in "Arrested Development," "Scream" and "Waterboy," they all have that quality of hysteria, of insanity.

I will tell you, it makes me happy.

So I guess the question is: What happened in the years between the Fonz and these more absurdist roles?

I'll tell you exactly: I thought the Fonz was so popular that I was going to go from mountaintop to mountaintop. And then I looked down and there were gigantic grass stains on my jeans as I slid right into the valley. Because there is no beating the system.

So it's one of those cases of becoming too famous for one role?

Typecasting. I thought, "I'll beat the system. I won't do Danny Zuko in 'Grease,' because I don't want to be typecast."

That would have been great, though.

Yeah, except that it didn't stop the typecasting at all. I went home and bought a soda; John Travolta went and bought an airplane. So you do the show, and the worst thing in the world -- for me, anyway -- is I no longer had a mission. I wanted to be an actor since I was 7. Now I've lived it to the nines, I've gotten mail from 126 countries, and now I'm sitting in my office at Paramount, thinking "What to do next?" And not knowing is psychically painful. If you don't know what you want, you literally get a migraine.

It can lead to some interesting projects though …" Henry Winkler Meets William Shakespeare "  is one of my personal favorites.

Well, that I did when I was still the Fonz. And that was all terrific and great. The Fonz was enormously generous to me … it put a roof over my head. But then it gets to a point where you're not going to get hired a lot, because they say, "Oh, he was really good … as the Fonz."

So what did you do to find yourself a purpose?

I became a producer. I became a director. And eventually I wrote a series of children's books with my partner, the Hank Zipzer series.

And those spoke to children with dyslexia …

You know what it spoke to? It spoke to funny. He was a funny kid who happened to be dyslexic. You know, we didn't set out to write an educational book. It was what I knew, what I grew up with, and they say, "Write what you know."

You certainly ended up with a lot of accolades for that series.

I did! I was just got the honorary OBE by the Queen of England.

That must have been a huge honor.

It is! Especially for a kid who was told he was never going to succeed, because he took geometry for four years.

But for the Fonz, it's just a regular day …

You know, this might be of personal interest just to me, but when I saw you in "Scream," that was one of the first horror movies I ever saw. And I became so obsessed with Wes Craven, who I know you're friends with.

Have you met him? He is your best English professor: He is soft-spoken, unbelievably articulate, and has a passion to write. And then he also makes scary movies that just throw you into oblivion, out of your chair and screaming from the theater.

Are you a fan of the horror genre?

No! I've only seen one scary movie in my life. I saw "Jaws," and I threw my legs into the air and onto the person sitting in front of me and screamed. That's it.

Did you even see "Scream" when it came out?

I waited for the DVD, so I could watch it slowly. I needed to be able to turn it off at any given time.

So how did your friendship with Wes develop then, if you hate horror films?

We had sushi together once a month for quite awhile, and then he invited me to play the principal.

And he was sort of a red herring for the killer … would you ever consider taking a darker role again?

No! Well, I know what to take because of my gut. That's how I started with "Children's Hospital," that's why I'm doing "Royal Pains," and I just finished a wonderful movie with Kevin James.

Let's talk about "Arrested Development," because I always assumed you got the role of Barry Zuckerkorn because you knew Ron from "Happy Days."

No, I was approached by the producers, by Mitch Hurwitz. You know Ron and I, as close as we are, we almost never talk about business.

Interesting. Because Scott Baio was on the show as well, so I thought Ron might have just been calling up all his friends from "Happy Days." Well I'm sure you have some insights into the "Arrested Development" movie that you're dying to tell me.

I wish I did. Here's what I know: I know Mitch is dying to make the movie. He's working very hard on figuring it out.

Well tons of fans are dying to see it. Do you think your character of Barry has eclipsed the Fonz in some people's minds at this point?

That's an interesting question, because when I do Sirius Radio now, all those guys are prime "Happy Days" fans. Then you get another group who know me from "Scream." Then you get another group that know me from the Adam Sandler movies. And then the last group is "Arrested Development." Oh, actually the final group is the children, who mostly don't know me at all. They come up and say, "My mom and dad loved you on 'Happy Days,' " but they are in the fourth grade.

So tell me a little about this new book you have coming out.

Well, it's out. It's on the New York Times bestseller list, and it's called "I've Never Met an Idiot on the River."

Would you consider that activity your meditation?

It's all inclusive. I get a little competitive, so I have to meditate a little harder than most.

Competitive meditation! I think we have a whole new school! We could have forest green mats!

And trophies of little Buddhas to the winners.

It's interesting that you are talking about the fish and the water literally … I know David Lynch had a book a couple years back called "Catching the Big Fish," but it was a metaphor for meditation and getting those great ideas.

Well it's all one idea. If you aren't near water and you are at wits' end, and you don't know what to do … don't do anything. Take a moment, put on your favorite music, like Edward Sharpe and the Magnetic Fields, and get lost. It will come to you, because your stomach, your instinct knows more than your head.

… and don't jump the shark?

Heh, what people always forget is that we were No. 1 on the air for five years after I jumped the shark.

Wow, so that saying is completely meaningless?

Well, it was only in Jon Hein's mind that it existed that way. When I did Sirius Radio, I just walked into Howard Stern's wrap-up show. And there, sitting to my left, is Jon Hein: a man I have talked about, the phrase I have talked about for 32 years, and I have never talked to him.

What did you say?

Did he have anything to say to you?

I don’t know … I think I'm going to do his radio show in a while, and we'll see what his questions are.