The president indicates that funding for the hallmark Democratic program is on the table. Is this the last straw? 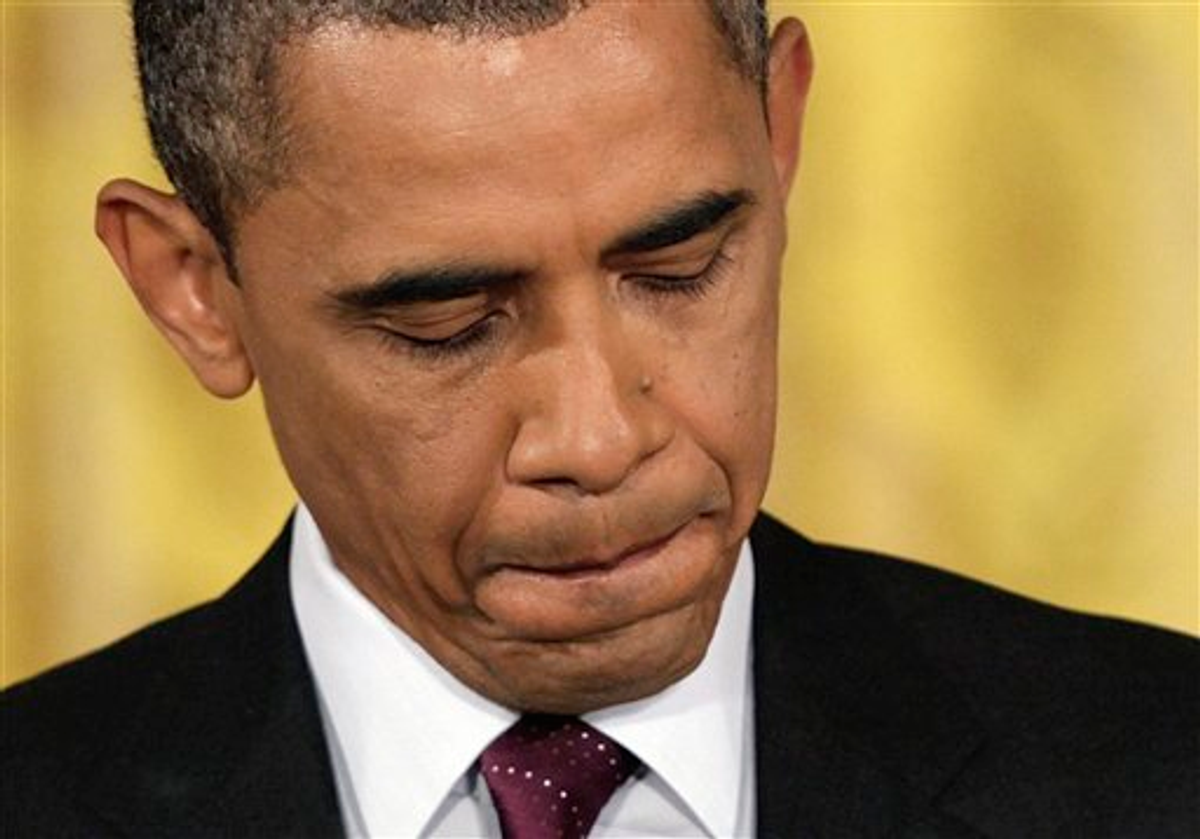 Wednesday night, the Washington Post reported that on top of the big cuts to Medicare he's already proposed, President Obama is now considering endorsing cuts to Social Security. In making this announcement (which formally embraces the concept of Social Security cuts first proposed by Obama's debt commission), the White House has lost all credibility in arguing that its 2012 political problems are the result of unfair expectations, particularly on the left. At the same time, the White House has finally exposed the strategy behind what so many of its apologists insisted was deft "three dimensional chess" on behalf of old-school liberalism -- and as we see, these tactics have nothing to do with liberalism and everything to do with Orwell-ism.

To review: The Wall Street Journal reports that "across a wide range of measures -- employment growth, unemployment levels, bank lending, economic output, income growth, home prices and household expectations for financial well-being -- the economy's improvement since the recession's end in June 2009 has been the worst, or one of the worst, since the government started tracking these trends after World War II." In light of this miserable situation, it's no surprise that Gallup's Frank Newport reports that the president's job approval rating "has been hovering near the fault line between probable re-election and probable 'one-term' presidency."

For most of the president's tenure, he, his staffers and his devoted-but-dwindling army of sycophants have insisted that the political fallout from the crushing recession reflects unrealistic expectations of Obama in the wake of George W. Bush's destructive reign. It is, dare I say, an audacious claim, especially coming from a candidate who asked us all to have the "audacity of hope" -- and it's more than a little insulting. After all, much of the complaints about the president have been about campaign promises that he didn't just fail to fulfill -- but that he refused to even try to fulfill.

Indeed, when a political candidate promises to try to pass a public option to compete with private insurers, attempt to crack down on Wall Street abuse, do what he can to stop unfair trade deals, oppose extending his predecessors tax cuts and avoid initiating initiate costly new wars sans congressional approval, and then once in office works to kill a public option, refuses to prosecute Wall Street crimes, presses the rigged trade deals he opposed, supports the extension of his predecessor's tax cuts and starts a new war in Libya with no congressional authorization -- whose fault is it that he ends up in reelection trouble?

I'd say the answer is obvious -- I'd say that if such a politician wasn't in reelection trouble, it would be a sign that our democracy is in a deeper crisis than it already is.

But, then, merely citing this record brings accusations of treason, at least from Democratic staffers, pundits and activists in Washington. In an age of politics that has melded politicians with celebrity and activism with starfucking, to be a rank-and-file progressive and honestly examine a candidate's record during a reelection campaign is to risk being portrayed as a dangerous, seditious, ideologically zealous revolutionary.

After Wednesday night, though, the power of this kind of with-us-or-against-us partisanship will face it's ultimate test. Because while the intricacies of health care, Wall Street regulations and trade pacts can be muddled with esoterica and while Democratic presidents have shown a deft ability to soothe their base by conflating militarism with humanitarianism (the same trick, of course, that Republicans use for their militarist adventures), this Democratic president is aiding a new war on Social Security, the single most popular social program in American history, a program that the Democratic Party has -- both in principle and out of sheer self-interest -- long based its brand on. Whether Obama ultimately champions specific cuts or just floats the general possibility of such cuts, the larger news is that he has now legitimized them as a negotiating chip -- and importantly, he made such a move on his own, not because of circumstantial necessity.

To appreciate this reality, go back and read every Democratic Party press release during President Bush's 2005 failed assault on Social Security. Those press releases reminded us that Social Security is one of the most fiscally sound programs in American history, projected to run surpluses for the foreseeable future. Additionally, what problems it does face can be easily solved -- as just one example of a solution, the Center on Budget and Policy Priorities reports that had President Obama refused to extend the Bush tax cuts and instead worked to repeal them, that move alone would generate revenues equal to two and one-half times the entire Social Security shortfall over the next 75 years (yes, 75 years!).

And yet now, like that gruesome scene at the end of "Fargo," Social Security -- a pay-as-you-go embodiment of fiscal responsibility -- is being rammed into the grisly woodchipper of cynical debt-reduction politics. Only instead of a glowering Peter Stormare (or Mitt Romney) doing the pushing, thereâ€™s a cheery President Obama insisting that cuts are really just progressive efforts to "strengthen" -- the same Obama who chastised his 2008 Republican opponent for using the same pathetic spin to shroud cuts to the same program.

This is not real politik, it is not triangulation and it isn't even Bush-ism (that is, taking unpopular positions and then just arrogantly pursuing them without regard for public will). No, we are watching a sort of Orwellian dystopia. Indeed, it is a sight to behold: a regime that believes it can say one set of things over and over and over again, and then do exactly the opposite.

Inherent in that ideology is the assumption that Americans -- and particularly Democratic voters -- are either too stupid to see the heist in process, or if they do see the heist, are too entranced by their president's power/fame/celebrity/charisma to want to do anything about it, even if what's being pilfered is Democrats' Social Security crown jewel.

The assumption, in other words, is that ignorance and fealty will permit a president to serve as an accomplice to the very grand larceny he was explicitly elected to office to oppose. Should the assumption prove true -- should Obama now be cheered on for doing to Social Security what no Republican president has ever been able to do -- the date on the calendar may say 2011, but it will really be 1984.