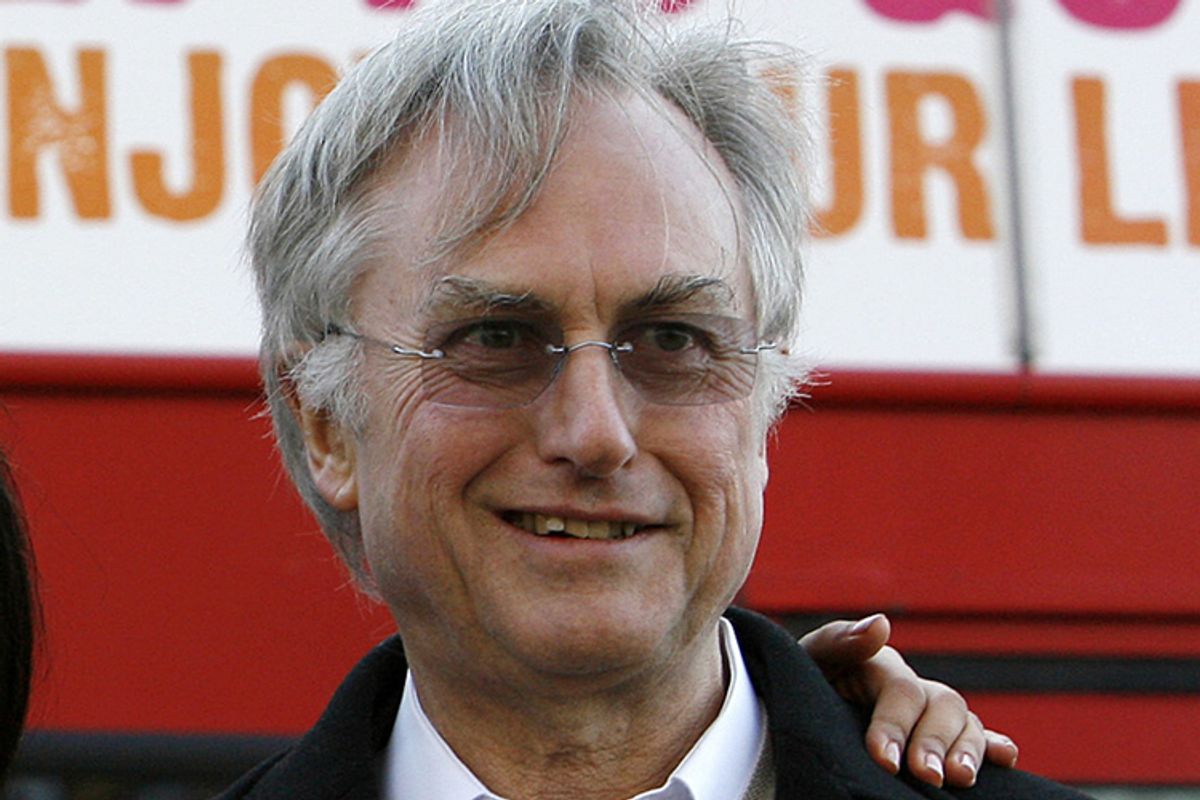 Richard Dawkins, the atheist almighty, has in a fury thrown some rhetorical thunderbolts at someone he disagrees with. This wouldn't be in the least bit surprising except for the fact that his disagreement isn't over the existence of a higher being or the significance of religion. No, he's pissed off that a female atheist has dared to complain about unwanted advances from a male nonbeliever.

It all started with a video blog from Rebecca Watson, founder of Skepchick, about her experience at an atheist conference last month in Dublin. She participated in a panel in which she talked about the problem of sexism among atheists, and the rape threats she had received from men in the community who don't agree with her. Importantly, Dawkins was on the panel and the guy who went on to hit on her was in the audience. Afterward, she went to the hotel bar with conference-goers until 4 a.m., when she told everyone that she was tired and wanted to go to bed. A male attendee followed her out of the bar and into the elevator, where he said, "Don't take this the wrong way, but I find you very interesting and I would like to talk more. Would you like to come to my hotel room for coffee?" This is what she had to say about the encounter:

Um, just a word to wise here, guys, uh, don't do that. You know, I don't really know how else to explain how this makes me incredibly uncomfortable, but I'll just sort of lay it out that I was a single woman, you know, in a foreign country, at 4:00 am, in a hotel elevator, with you, just you, and -- don't invite me back to your hotel room right after I finish talking about how it creeps me out and makes me uncomfortable when men sexualize me in that manner.

That's all. It took up just over a minute of an 8-minute-long video. She didn't call for the man to be castrated or claim to be a victim of great injustice; all she expressed was that his overture made her feel "incredibly uncomfortable," and that guys should generally avoid doing that. "That" being 1) hitting on a woman after she has gone to great lengths to explain why she doesn't want to be sexualized within the atheist community, and 2) ignoring her remark that she is tired and just wants to go to bed. PZ Myers, a biologist who pens the bookmark-worthy skeptics blog Pharyngula, wrote a post about it and then Dawkins himself -- the rock star of atheism -- waded into the comments thread with a satirical letter addressed to a Muslim woman:

Stop whining, will you. Yes, yes, I know you had your genitals mutilated with a razor blade, and ... yawn ... don't tell me yet again, I know you aren't allowed to drive a car, and you can't leave the house without a male relative, and your husband is allowed to beat you, and you'll be stoned to death if you commit adultery. But stop whining, will you. Think of the suffering your poor American sisters have to put up with.

Who knew Dawkins had such flair for creative writing -- and for being a dick? OK, so, many people had already concluded the latter from his atheistic pomp -- but, being an arrogant nonbeliever myself, I resisted such a reading of him until now. He's of course correct that there are much worse things going on in the world, but that's a crap rhetorical move meant to belittle and silence. It's an argument that could be easily made against Dawkins' own work: Why are you arguing over whether God exists while children are starving in Africa.

When this was pointed out to Dawkins, he responded again on Pharyngula to insist that wasn't the argument he was making but rather that she experienced no physical violation: "She was probably offended to about the same extent as I am offended if a man gets into an elevator with me chewing gum. But he does me no physical damage and I simply grin and bear it until either I or he gets out of the elevator." Later, he attempted to clarify his point: "The 'slightly bad thing' suffered by Rebecca was not even slightly bad, it was zero bad. A man asked her back to his room for coffee. She said no. End of story." He went on to make fun of Watson's defenders who have pointed out that she was "stuck" in the elevator with the man, whom she hasn't directly spoken with until then: "No escape? I am now really puzzled. Here's how you escape from an elevator. You press any one of the buttons conveniently provided."

Clearly, Dawkins has never experienced what it's like to carry around the fear of sexual assault, as most women do on some level. Myers helpfully explains why fear in this particular situation would be understandable: "Try googling 'elevator rape'. What you will find is an unpleasant combination of stories about real crimes in which women were raped in elevators, and porn about women being raped in elevators." There are also the aforementioned rape threats that Watson has received. All that said, though, it actually sounds like Watson didn't feel threatened by the man, only creeped out. Remember: All Watson did was briefly call out a behavior that made her uncomfortable; and later, she criticized the outsized anger she received in response to that original aside.

The most appropriate question to ask here is one already posed by Myers: "For those of you who are outraged at that, I ask: which part of her response fills you with fury? That a woman said no, or that a woman has asked men to be more sensitive?" That's the thing, Watson did implicitly say "no" before the man got on the elevator -- by spending much of the day talking about how she didn't appreciate being hit on at atheist conferences, how she had experienced threats of rape from within the community, and by telling the group that she was tired and going to bed. Then she essentially said no again on the elevator, and yet again when she filmed her video blog. Lurking behind the vitriolic response from countless Internet trolls is the attitude that women should be flattered to be hit on, no matter the circumstances.

Surely not all of the men who reacted angrily to Watson's video are woman-hating sociopaths. It's probably the case that many were indirectly responding to past personal rejections that made them feel confused and wounded. I've known kind, decent men who express supreme frustration over how unclear women can be. Resentment builds up and some become hypersensitive to any female complaint about being hit on. It's true that women can be confusing, and that is especially true when it comes to hitting on them, because we have been socialized against saying "no." Instead, we say things like, I'd love to, but I'm busy or I can't or I have a boyfriend (even if we aren't, we can, and we really don't). I try to fight my natural inclination to wrap up rejection in such a way that one might mistake it for a valentine -- but I also expect men to put in some effort to try to pick up on subtle, humane hints (or to simply give a shit about what I want rather than doggedly pursuing their end goal).

The trouble with the "girls are confusing" attitude is that it excuses insensitivity -- whether it's to subtle hints or unnerving scenarios (see: late-night elevator propositions) -- and serves as a shield for guys who simply don't want to take "no," whether it's implicit or explicit, for an answer. In this particular case, the man was either not paying nearly enough attention or he was willfully disregarding her wishes. This doesn't necessarily make him evil, but it does make him creepy -- and the same goes for those who lambasted Watson for saying as much.