When tragedy and anger fuel legislation, the results are rarely what we hope for 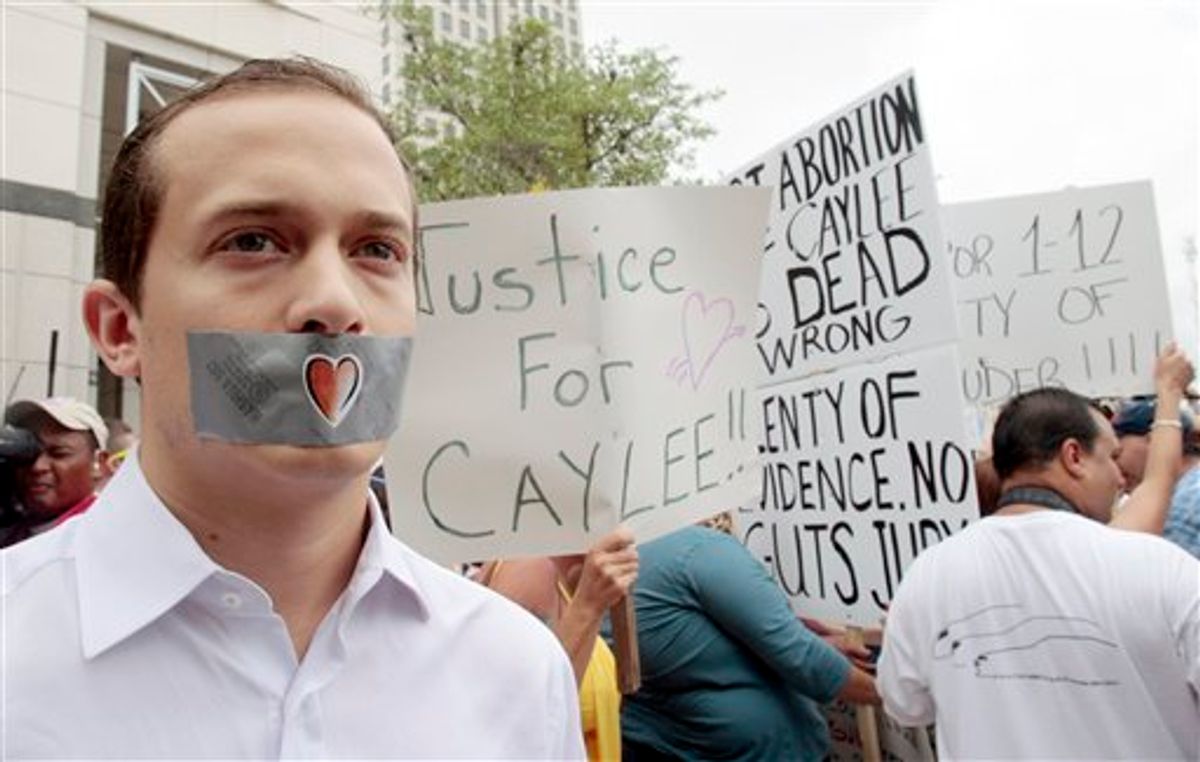 Edward Mehnert, of Orlando, covers his mouth with duct tape as he protests during the Casey Anthony sentencing in outside the Orange County Courthouse in Orlando, Fla., Thursday, July 7, 2011. A court official says Casey Anthony is going to be released from jail next Wednesday following her conviction for lying to authorities who were investigating the death of her 2-year-old daughter, Caylee. (AP Photo/Alan Diaz) (AP)
--

Public anger roils in the aftermath of Casey Anthony's acquittal on Tuesday -- in particular, over the fact that her late daughter, Caylee, was only reported missing a full month after her disappearance. Fueled in part by the sentiment that this negligence (if nothing else) should have landed Anthony with more jail time, an online petition, which has already collected more than a half-million signatures, would make that type of inaction illegal. Called "Caylee's Law," the proposed legislation would make it a federal crime for a parent to wait more than an hour to report the death of a child to the police (or more than 24 hours, in the case of a missing child). Any reports after those time frames had passed would result in the immediate arrest of the offending parents. Lawmakers in four states have already drafted versions of the bill.

Caylee's Law is the latest in a long line of legislative movements galvanized by the the violent deaths of children. Yet these sorts of bills have a checkered past. When tragedies like Caylee Anthony's spur populist, outrage-fueled laws, the resulting legislation often draws criticism for being purely reactive, overly indiscriminating and even counterproductive.

As Ted Frank, editor of the Center for Legal Policy's "Point of Law" website, noted in January:

My rule of thumb is a strong presumption that any law named after a victim is poor public policy enacted by legislators who confuse voting against a law with voting against an innocent person.

To take a look at the legacy of these laws, we've pulled together some of the more notable examples:

There are certainly notable differences between the above mandates and what's being proposed under Caylee's Law. For one, the gruesome element of sexual abuse present in so many of the cases that inspired legislation is thankfully absent here. But there are salient connections to be made.

The Economist published a scathing indictment of American sex-crime laws in August 2009 that delved into the issue of "named" legislation. At the time of the writing, 674,000 Americans were registered sex-offenders, but an alarming percentage of them were low-risk vialotors, for whom the punishment didn't seem to match the crime:

[H]arsh laws often do little to protect the innocent. The police complain that having so many petty sex offenders on registries makes it hard to keep track of the truly dangerous ones. Cash that might be spent on treating sex offenders -- which sometimes works -- is spent on huge indiscriminate registries. Public registers drive serious offenders underground, which makes them harder to track and more likely to reoffend. And registers give parents a false sense of security: most sex offenders are never even reported, let alone convicted.

What's more, the political calculus is a no-brainer:

Stricter curbs on pedophiles win votes. And to sound severe, such curbs must be stronger than the laws in place, which in turn were proposed by politicians who wished to appear tough themselves. Few politicians dare to vote against such laws, because if they do, the attack ads practically write themselves.

While the comparison isn't perfect, it's easy to see a similar problem at the crux of both issues: An angry public demands decisive action but the action it demands rarely makes legislative sense. Just as prosecuting and branding teenagers with a scarlet letter for engaging in underage sex -- the law of the land in 29 states, the Economist points out -- won't solve the problem of violent sex crime, the penalties observed under Caylee's Law could do little to combat the crucial problem in that case: that a mother might have killed her daughter and hid it from everyone for a month.

How would this keep a case like Caylee's out of the courts[?] If a parent actually killed her daughter, do you think she would tell the police so as not to violate some random federal statute. The purpose of this law, much like laws requiring police about the notification of lost guns, is to allow the police to easily arrest someone, without sufficient cause to show they committed the underlying offense -- whether it is a gun crime, or murder.

Oklahoma Rep. Paul Wesselhoft, a Republican who is championing the law in his state, acknowledged as much to ABC News: "It probably won't be a deterrent to crime, but at least it's something the prosecutors can charge someone with who's violated the law."

The Wall Street Journal has already noted that it might be unconstitutional for the federal government to pass something akin to Caylee's Law. (The Constitutional Law Prof Blog, meanwhile, enumerates some of the case law involved.) But states inclined to pass the legislation -- such as Florida, where the whole Anthony affair played out -- face no such roadblocks. It's unclear what resistance these proposals could face across the country. (A representative for the ACLU of Florida told the Palm Beach Post  that the organization was unlikely to fight such a law, for lack of "civil liberties implications.") But questions certainly remain about the efficacy and prudence of Caylee's Law.