After all the sound and fury, Democrats and Republicans will cut a deal both sides can misrepresent as "win-win" 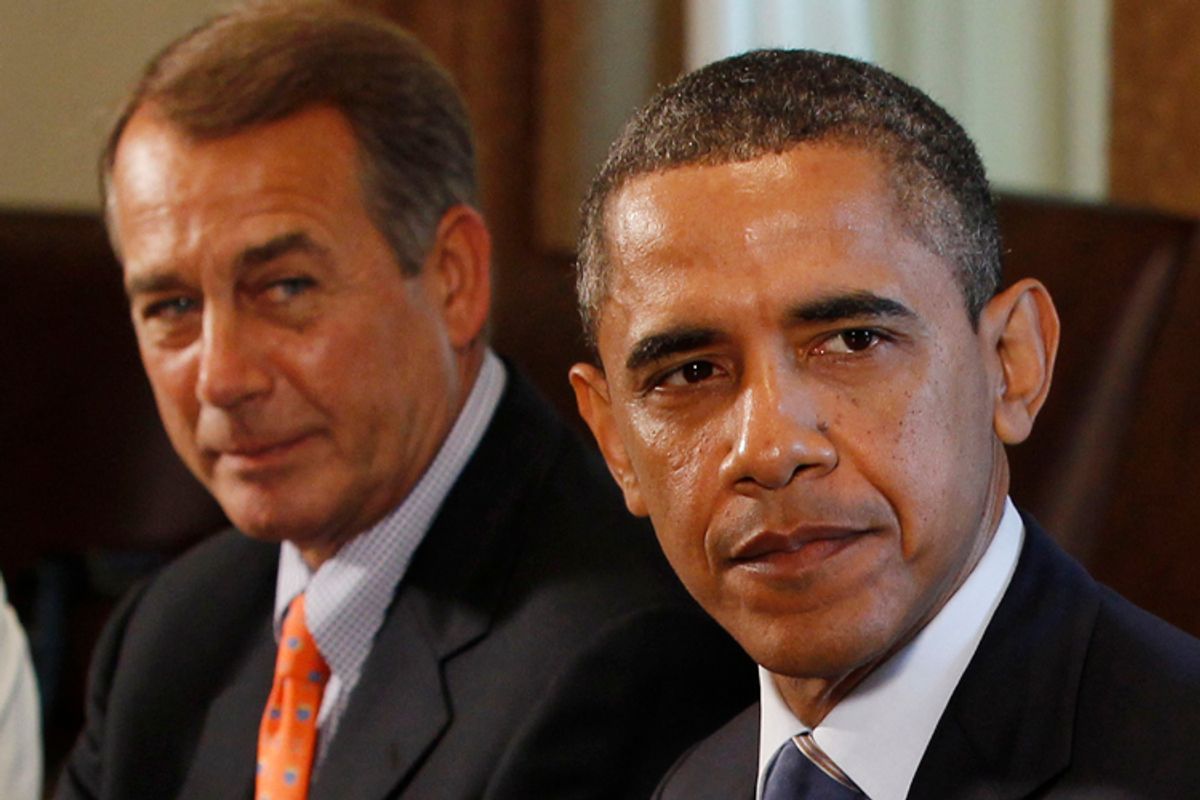 U.S. President Barack Obama (R) and Speaker of the House John Boehner are joined by Congressional leaders as they discuss ongoing efforts to find a balanced approach to deficit reduction in the Cabinet Room of the White House in Washington July 7, 2011. Congressional leaders are still far apart on a wide range of budget issues but agree on the need to raise the U.S. debt ceiling, and will meet again on Sunday, Obama said on Thursday. REUTERS/Larry Downing (UNITED STATES - Tags: POLITICS BUSINESS) (Â© Larry Downing / Reuters)
--

Less than a month remains before the Aug. 2 debt ceiling deadline -- that dire date on which, if an agreement to raise the debt limit is not reached, we can surely expect an apocalypse that will make Ragnarok, Armageddon and the climactic Chicago-destroying battle between Autobots and Decepticons at the end of "Transformers: Dark of the Moon" seem like kindergarten waterfights. How do I know that the doom of the gods is almost upon us? By the sheer absurdity of the potential scenarios that are bouncing around Washington.

Progressives are worried that Obama is going to throw Medicare and Social Security under the bus. Conservatives are losing their minds at the thought that Obama might simply declare the restrictions imposed by the debt ceiling unconstitutional. Ron Paul wants the Fed to rip up the trillions of dollars of U.S. Treasuries that it holds, as if the debt never existed at all. Another, even loopier Republican congressman, advocates lowering the debt ceiling -- a feat that would retroactively place the U.S. in default. Meanwhile, Tim Geithner is trying to figure out if it is even technologically feasible to reprogram Treasury computers to stop making 3 million automatic payments every day.

I am not a betting man, but I will lay odds that none of those scenarios will play out. Obama is not going to force a constitutional crisis. The Fed is not going to disappear trillions of dollars of Treasury securities. Social Security and Medicare will not be gutted. The truth is likely to be far more prosaic. After a few more weeks of bickering, but before the bond market starts to get seriously agitated, Republicans and Democrats are going to agree to a deal that includes reasonably hefty spending cuts phased in over the next 10 years, along with a raft of revenue "increases" that GOP legislators will be able to pretend aren't really increases at all. A hard core of House Republicans will refuse to endorse the deal, but enough Democrats will sign on to get the legislation past the finish line.

It's still very hard to see through the haze of posturing and bluff, and some plugged-in commentators seem convinced that there is real momentum for a "grand bargain" that fundamentally restructures government finances, but I still think that something much less ambitious, along the lines sketched out by Time's Jay Newton-Small and TNR's Jonathan Chait on Thursday sounds much more feasible.

[A] more modest package for roughly $1.7 trillion to $2.3 trillion in cuts with upwards of $500 billion in revenue increases, including $40 billion to $60 billion from ending tax breaks for corporate jets, yachts and race horses (and, possibly, a proposal to stop taxing hedge fund managers' income as capital gains, thus subjecting it to a higher rate); plus $150 billion to $200 billion in increased revenues from requiring more pension contributions from federal employees, broadcast frequency auctions and getting rid of farm subsidies; and another several hundred billion dollars from pegging inflation to the Consumer Price Index. All of the new revenues would be offset by a permanent or long-term Alternative Minimum Tax fix, a popular bipartisan move, thus satisfying the Grover Norquists of the world. This deal would include modest Medicare cuts, but to providers only, and could also include some short term stimulus such as an employer payroll tax holiday.

As Chait explains, the Alternative Minimum Tax "offset" is the all-important fig leaf in this deal. Originally intended to prevent wealthy Americans from claiming too many deductions on their taxes, for years the AMT has threatened to gouge progressively bigger chunks of flesh from middle-class Americans. But "threatened" is the operative word here, because Congress keeps patching the tax code on a regular basis to let millions of taxpayers off the hook. By applying revenue increases derived from closing loopholes and ending tax breaks to permanently fixing the AMT, Republicans and Democrats can make a real dent in the deficit while claiming that there has been no net increase in taxes.

That's the kind of scheme that passes the smell test -- a combination of loophole closing, public-sector-employee squeezing, inflation-index finagling, and tax code juggling that allows Democrats to claim revenue increases while Republicans can pledge allegiance to the god of zero tax hikes. It won't be pretty, it won't qualify as a "grand bargain," and it certainly isn't what the doctor ordered for the current state of the economy, but the alternative -- a failure to raise the debt ceiling -- simply isn't going to happen.

Unless it does. In which case, Americans will enjoy the dubious honor of living through one of the lowest points in the entire history of United States governance.