Pick of the week: The chimp they tried to turn human 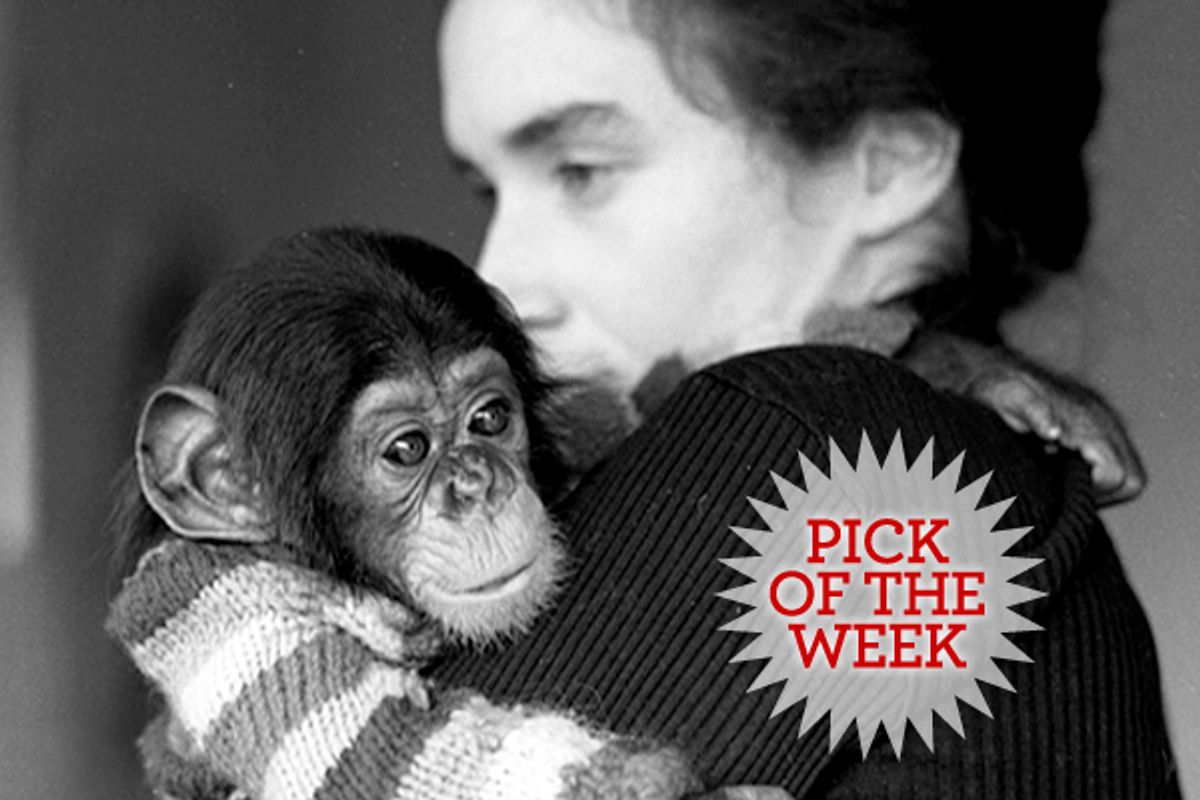 If your cultural memory goes back to the 1970s, here's what you already know, or think you know, about the subject of James Marsh's film "Project Nim": An infant chimpanzee called Nim -- or Nim Chimpsky, in joking homage to linguist Noam Chomsky -- was raised entirely by humans and taught elements of American Sign Language, as part of an experiment that aimed to determine whether an ape could acquire language the same way we do. (If one could, that might disprove Chomsky's contention that humans are uniquely hard-wired for language.) The results of the experiment were controversial at the time and remain so today. Herbert Terrace, the Columbia University psychologist who designed the project, ultimately decided that Nim hadn't gotten anywhere near a syntactical understanding of human language and used his vocabulary of 125 or so signs merely as a primitive code to achieve short-term goals, such as a piece of fruit or a play session.

As he did in his Oscar-winning "Man on Wire," Marsh takes a much-mythologized, media-friendly event of yesteryear and gradually fills in the background and context via a meticulous blend of archival footage, talking-head interviews and artful reconstructions. (This film is based on Elizabeth Hess' 2008 book "Nim Chimpsky: The Chimp Who Would Be Human.") As with Philippe Petit's 1974 wire-walk between the Twin Towers, the Nim experiment looks a whole lot different in retrospect. "Project Nim" is a darkly hilarious social portrait of the bizarre alternate universe of 1970s academia and an extraordinary biography of a non-human individual, on whom all sorts of human desires and ideologies were projected. Marsh is far too scrupulous, or too canny, to take sides in the dispute between Terrace and his many detractors, but he doesn't have to. Basically, the more the guy opens his mouth, the more he looks like a massive sleazebag, and the more you learn about his so-called experiment, the more it looks like a misbegotten and sloppily executed disaster that says more about human arrogance than it does about chimps and language.

"Project Nim" also belongs on the ever-lengthening list of movies designed to convince younger people that however much the '70s may sound like a paranoid fantasy out of a Philip K. Dick novel, they actually happened. (See also: "Carlos," "Munich" and "The Baader Meinhof Complex," not to mention "Man on Wire.") I mean, you couldn't make this stuff up. Terrace's supposedly scientific exercise involved shooting Nim's mother with a tranquilizer gun, seizing her 2-week-old infant and entrusting it to Stephanie LaFarge, a former graduate student (and former lover) of Terrace's who knew nothing about chimpanzees. She did, however, have a large blended family, in which numerous children lived in a state of unsupervised Manhattan chaos; evidently the idea was that one more who wasn't quite human wouldn't make much difference.

LaFarge had a background in Freudian psychoanalysis and arguably conducted her own experiments on Nim while by her own admission seeking to undermine or derail Terrace's single-minded focus on sign-language acquisition. (Chimps lack the musculature for verbal speech, in case you're wondering.) She breast-fed Nim, allowed him to "explore" her body, and observed his masturbation techniques. Nim was permitted to trash the house and terrorize LaFarge's husband, whom he immediately identified as a rival male. He was possessive, needy, affectionate and violent; an extremely intelligent and humanlike animal, but still an animal. She gave Nim alcohol and marijuana. I'll say that again: Entrusted with the care of an infant ape during a controversial species-bridging experiment, she got him high. (A bit later in the movie, you'll see Nim trying to get disturbingly intimate with his pet cat. As humans know all too well, those male urges always find a way out.)

Terrace dropped in and out like a benevolent but largely absent uncle, and seen in old film footage with his combover and his BMW sports coupe, he looks the part. Once he'd had enough of LaFarge's act he transferred Nim to a bucolic Columbia-owned estate just north of Manhattan, where Nim was briefly entrusted to a high-energy undergraduate named Laura-Ann Petitto, at least until she and Terrace had an affair and then broke up. Notice a kind of pattern there? (In fairness, I should add that Petitto is today an eminent neuroscientist at the University of Toronto, who remains supportive of Terrace's conclusions about Nim's language skills.) Whatever you make of LaFarge and Petitto and Joyce Butler, another undergraduate who became Nim's third surrogate mother, the chimp's five-year run at the heart of Terrace's experiment were characterized by a level of disorder and discontinuity that would be distressing for any human child. It's hard to imagine what valuable information could be extracted from that situation, and equally hard to tell whether Nim bit and injured several of his human companions because of his innate male-animal qualities (as presented here) or simply because he was pissed at them.

Furthermore, if Terrace wants to reflect a little harder on his contention that Nim learned to use language only in the cause of short-term self-interest and never imparted any deep chimp philosophy, maybe he should look in the damn mirror. Terrace never evinced the slightest concern for Nim's welfare beyond the instrumental goals of his experiment. After Project Nim collapsed Terrace cheerfully shipped his overeducated, human-acculturated subject -- who had learned to drink coffee, wash dishes and use the toilet -- back to the dirty and overcrowded primate research facility in Oklahoma where he was born. (Terrace admits to some vague guilt feelings, in retrospect, but his limited capacity for reflection and introspection makes his choice of profession seem willfully perverse.)

While the endgame of Nim's story is undeniably distressing, it isn't as tragic as it might have been, and there are heroes in it as well, along with idiots and villains and one intelligent ape who learned some dubious lessons from his time with human beings. Foremost among the heroes is Bob Ingersoll, a longhaired Deadhead grad student at the dismal Oklahoma facility who became, you'd have to say, Nim's best and truest friend. Now, it sounds as if Ingersoll and Nim smoked a fair bit of weed during their time together, but it's impossible not to feel different about this portion of Nim's life. He was an adult ape by then, and no longer a star of interspecies communication, but just another inmate in the secret prison-industrial complex of animal research facilities.

Terrace visited Nim once in Oklahoma, with photographers along, in a transparent P.R. event for the book he published in 1979. He never saw him again after that, and took no interest when the Oklahoma facility sold Nim, and most of its other apes, to a New York University lab where experimental vaccines were tested on primates. (Terrace's current website at Columbia makes no mention of his 1970s work with Nim, which is instructive in itself.) Nim could well have died there had not Ingersoll, with the help of a crusading lawyer and a guilt-ridden research veterinarian, focused media attention on his plight and attracted the notice of animal rights campaigner Cleveland Amory. Even that's not the end of the story, since Amory's Texas shelter had no suitable facility for primates and at first resisted all offers of help from Ingersoll and other experts. Ultimately, Nim ended his life in acceptable conditions, among other chimps and old friends. (But wait till you see what happens when Stephanie LaFarge, his first foster mother, shows up!)

Ingersoll says he doesn't care about the language-or-not debate, but insists he communicated with Nim perfectly well, using signs (including some of Nim's own invention) and ordinary nonverbal cues. Almost anyone who's ever lived with an animal feels the same way, to a greater or lesser degree, and one could almost say that Terrace's experiment was a deranged and hubristic attack on common sense: Animals can be both clever and intelligent, but it's no good trying to turn them into human beings. If you ask me, Terrace began with a set of ideological assumptions about words like "language," "meaning" and "imitation" that predetermined his outcome, but Marsh's resonant and thought-provoking film doesn't try to answer the question of whether Nim learned to talk, or could have. It does suggest that only by treating other species with dignity and respect can we respect our own unique status, and that's a lesson we keep forgetting.

"Project Nim" is now playing in New York and Chicago, with wider national release to follow.