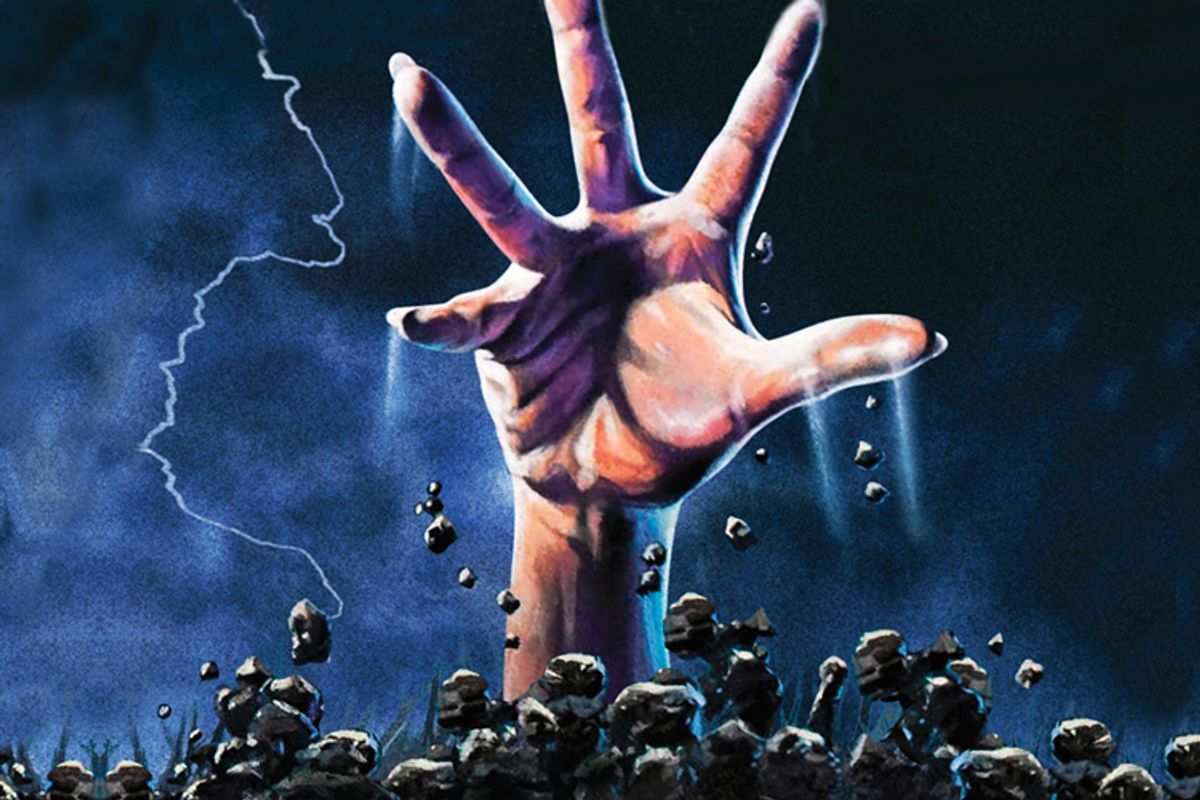 A detail from the cover of "Shock Value"
--

Spending the better part of one's youth reveling in a despised form of cultural production is rarely good for a person's perspective. Whether you delight in superheroes or Sweet Valley High novels or Japanese pop bands, it's hard not to bristle when outsiders dis them (while knowing nothing), and from there it's a slippery slope to that unfortunate state in which you refuse to admit that the objects of your passion are ever less than brilliant.

"Shock Value," by Jason Zinoman is not an example of this syndrome, despite being a history of the innovative horror films of the 1970s. Zinoman's a fan, but not a fanboy, which makes him unusual in the ranks of writers on this subject. "Shock Value" belongs -- with "Pictures at a Revolution: Five Movies and the Birth of the New Hollywood" by Mark Harris and Peter Biskind's "Easy Riders, Raging Bulls: How the Sex-Drugs-and-Rock 'n' Roll Generation Saved Hollywood" -- to a newish genre of film writing. It fuses biography (in this case, of such masters of horror as Wes Craven, John Carpenter and Tobe Hooper), production history, movie criticism and social commentary into a unified and irresistible story.

Often, the tale of how a movie gets made or a genre gets launched is as fascinating as the movie itself. But where Harris' and Biskind's books examined such widely celebrated classics as "Bonnie and Clyde" and "The Godfather," Zinoman's is a paean to the likes of "Texas Chain Saw Massacre" and "Night of the Living Dead." It's a bit cheeky, but he makes it work. And I don't just say that as someone who saw pretty much every horror film released between 1979 and 1985.

Zinoman argues that horror movies in the 1970s moved from the fusty domain of aging and unscary stars like Vincent Price and Peter Cushing, swanning around in cloaks through dry-ice-befogged castles, into a terrorized landscape of gritty dives and deceptively sedate suburbs where faceless agents of chaos and carnage raged unchecked. Well, not always faceless, but the villains in these films -- from Leatherface to Michael Myers -- were often masked, literally and figuratively, with their motivations and histories left deliberately unclear.

"The New Horror perspective argued for increased ambiguity," Zinoman writes. "When the monster does appear in these movies, it is relentless, powerful and barely motivated, if at all." He sees this as evidence of how much the new generation of horror filmmakers was influenced by the writer H.P. Lovecraft, who once wrote, "the oldest and strongest kind of fear is fear of the unknown."

That's one narrative strand snaking through "Shock Value": The saga of how directors as far-flung as Hooper, Carpenter and George Romero embraced this ethos during the 1970s, reinvigorating the horror genre both artistically and commercially. In the next decade, however, they'd see their legacy degenerate into special-effects-driven formula filmmaking that repudiated what made the original films so thrilling. "Often," Zinoman writes, "the first thing every remake [or sequel] screenwriter adds is backstory. In the original 'Black Christmas,' you never see the killer, but the remake goes back in time to figure out who he really was."

The other central storyline concerns the friendship of Carpenter and Dan O'Bannon, the original screenwriter for "Alien" and co-creator with Carpenter of the ultra-low-budget cult classic, "Dark Star." Friends and collaborators in film school, Carpenter -- depicted as driven, talented and cold-blooded -- and O'Bannon fell out during the completion of "Dark Star." O'Bannon then descended into a morass of illness and paranoia that rendered him "an unsung hero of fantasy films," according to Zinoman. Crohn's disease, the long misdiagnosed ailment that ravaged his digestive system and ultimately killed him, inspired O'Bannon's most famous invention, the fetal alien that bursts from the belly of John Hurt in "Alien."

The rest of "Shock Value" is filled out with accounts of primarily mainstream directors who dipped into full-fledged horror with electrifying results -- Roman Polanski ("Rosemary's Baby"), William Friedkin ("The Exorcist"), Brian de Palma ("Carrie") -- and the less dramatic careers of Hooper and Craven. All this lore comes sprinkled with interesting tidbits, like the actor from "Texas Chain Saw Massacre" who remarked of the sweltering shoot, "I moved troops through the jungles of Vietnam, and it wasn't as bad as making this film." Then there's the old acquaintance of Craven, who recalls, "There was something Englishy about him, like a slightly seedy lord."

Zinoman writes persuasively on how the mood of the New Horror was conjured via specific cinematic techniques -- in "Halloween," lightning-fast POV switches between killer and victim, shaky camerawork to suggest a documentary element and a soundtrack composed by Carpenter himself (to save money). At his best, the author has a Chandleresque way of making his point, whether it's about a movie ("The music in 'Jaws' told you something was coming. The music in 'Halloween' made it clear that it was never going away") or the story behind it ("They were hungry, desperate and willing to do anything to get their careers off the ground -- just the kind of people Jack Harris liked to do business with").

He's less perceptive on the psychosexual subtext of horror, but then again the psychosexual subtext of horror is a vast and jungly continent that has been extensively charted by others. (I recommend Carol Clover's classic treatise "Men, Women and Chainsaws.") Rooting around too deeply under the genre's hood could well be seen as beyond the purview of "Shock Value." Still, it was something everyone argued about at the time. The New Horror wrestled so blatantly with its male filmmakers' and audience's ambivalence about gender roles and, especially, about women's bodies that it left itself wide open to the political attacks that assailed it during the '70s and '80s.

Also, I disagree with Zinoman about the 1980s and special effects. Horror needs an element of the unexpected to shock, which is one reason why the genre is prone to radical shifts. Carpenter's "The Thing" (1982) was hugely exciting when it first came out, effusively illustrating the creative potential of technical advances in visual effects. It minted many new horror fans, like myself, filmgoers who weren't interested in seeing further iterations of "Halloween." Yes, effects-driven movies became stale and mechanical (not nearly as quickly, incidentally, as the slasher film did) but that doesn't retroactively invalidate the wonder that audiences felt when they first encountered those astonishing images.

Furthermore, Zinoman is so committed to the idea that the 1980s saw a diminishment in the quality of horror films that he's obliged to discount or neglect many excellent movies, from "A Nightmare on Elm Street" (a scarier film than "Texas Chain Saw Massacre" in my opinion), to nearly the entire oeuvre of David Cronenberg. C'mon: David Cronenberg. If there was ever a director who demonstrated the thin line between exploitation and art, there's your guy, right there. But Cronenberg made many of his best horror films in the mid-1980s, which doesn't fit Zinoman's thesis.

However, I wouldn't necessarily label this as a flaw. The distinguishing trait of good book on the movies is that the parts you do agree with make you care enough to want to debate the author until late into the night about the parts you don't agree with. Preferably over endless cups of diner coffee, or better yet, bottles of beer, a stack of DVDs at your elbow and the remote in your hand. You should finish a great movie book with your dander up and your Netflix queue swelled by at least a dozen titles. And on that count, "Shock Value" more than delivers.

Books Horror Our Picks What To Read