The lies I told as a psychic

I thought it would be an easy part-time gig. But faking out strangers was much trickier than I ever predicted 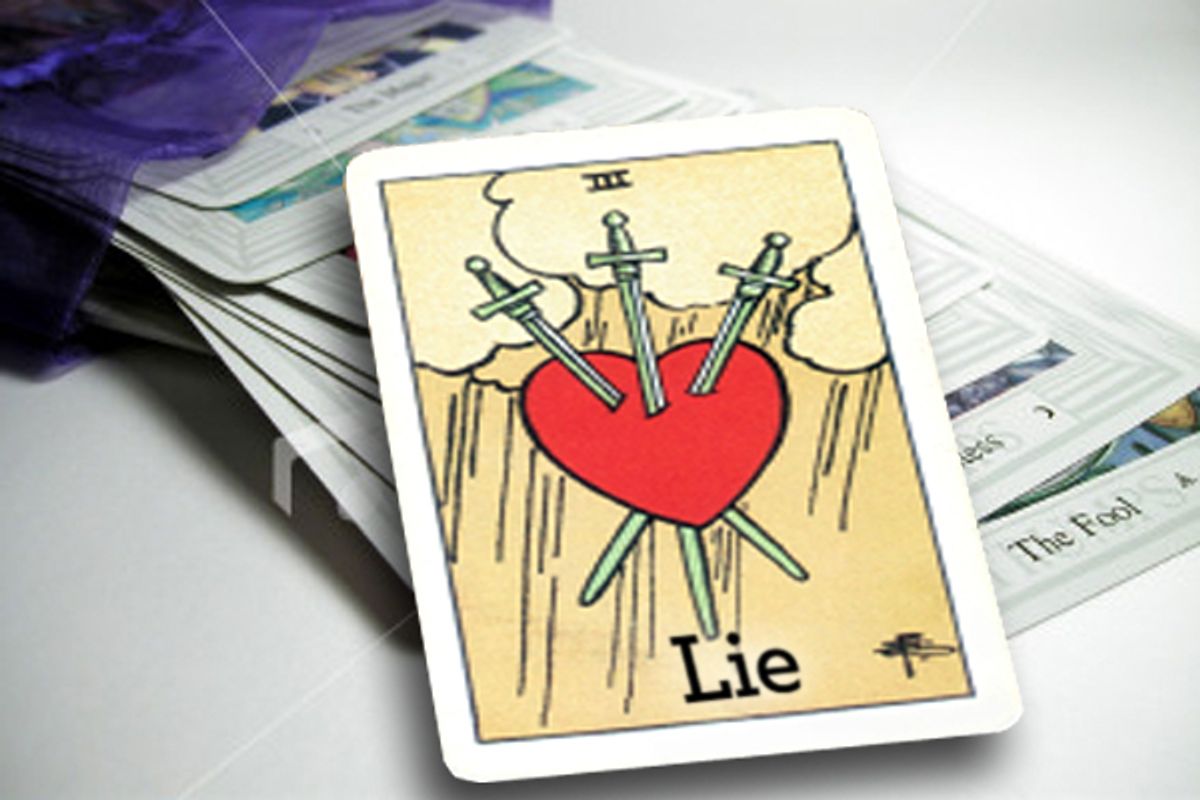 It was 2 a.m., and by the time I got off the phone with Judy, I knew all about her dead husband, ungrateful children and the grandkids she didn't get to see enough. I predicted that she would travel and meet a new soul mate. Judy laughed a lot, cried a little and paid $300 for the privilege of speaking to me.

Too bad I wasn't a real psychic.

Actually, I was a failed actor. Long before "Glee" made choir dorks seem cool (or at least profitable), I sang show tunes and mugged my way through high school in unflattering dresses and character shoes. In college, I was cut from my musical theater program, and though I graduated with a bachelor of fine arts, I couldn't be satisfied without a theater degree. My ego needed it.

I also feared that a real job with a desk, entry-level salary and 401(k) would become my permanent station in life -- as if working at an insurance company or bank right out of college would handcuff me to that industry for the next 50 years. So I moved to Las Vegas, which seemed like the perfect place to hide from the grown-up world. Knowing my parents would only support such nonsense if I stayed in school, I enrolled at UNLV -- also known locally as the University of Never Leaving Vegas -- to pursue a master's degree in theater.

Lacking the abs of steel required to pull off the tight, shiny getups of the Vegas showgirl, I took a variety of odd part-time jobs. I made $6 per hour job coercing vacationers to sit in an auditorium, watch screenings of crappy sitcoms and fill out opinion surveys. Then I played the role of a soda jerk at the World of Coca-Cola museum, where angry tourists heckled me once they learned that I wasn't actually allowed to serve them anything to drink.

Dejected, I scoured the classifieds. Then I saw it:

"Phone actors wanted. Work from home. Make your own hours."

Could it be true? Or was this some sort of telemarketing scheme? I called the number. A friendly man assured me that this was completely legit.

"You've heard of the Psychic Friends Network, haven't you?" he asked. "This is just like that."

Yes, I had seen the commercials. My brothers and I mocked the company's spokeswoman Dionne Warwick. When we were little kids, our parents took us to one of her performances at a Lake Tahoe hotel. She sang a few songs, coughed and asked for water. It was a short show, and my parents were disappointed they had wasted money on it.

"The thing is, I'm not sure that I'm psychic," I confessed. There were times I suspected things were going to happen before they did. But did knowing my family was going to throw me a surprise party for my 15th birthday count as mystic instinct?

"That's OK," he said. "We'll give you everything you need for the job."

I called my mom for advice. She wouldn't hesitate to tell me if she thought this was a bad idea. We both believed in psychics. In fact, one of my mother's closest friends had this power. Although Grace was elderly and forgetful, she was truly clairvoyant. She even adopted a rottweiler for protection because of a premonition she had about being robbed. One day she left the dog at home, and she was held up.

"As long as you can work from home, I think it's fine," Mom said. "You're insightful, and you can probably be very helpful to people."

I attended one short training session, where I filled out a 1099 form so I could become an independent contractor. (That sounded so glamorous, until I learned that this meant I would get reamed when it came time to file my taxes.) The trainer said that some of their contractors made thousands of dollars and worked constantly. He stressed that we didn't necessarily have to be psychic to do the job; we could learn how to perform a tarot card reading to achieve the same effect. I bought a deck along with an instruction booklet at one of those psychic specialty bookstores that sells more crystals than books. I also had to get rid of call waiting. Aside from the obvious distraction, it posed too big a risk of disconnecting conversations. Callers got my undivided attention. Considering I couldn't tell the future, it was the least I could offer.

The main thrust of the job entailed keeping clients on the phone for as long as possible. At $5 per minute, some lonely, needy or desperate person could pay hundreds of dollars for a chat. (By the time I joined the 1-900-number business in 1998, laws had been passed to automatically end the calls after an hour. Too many sad sacks had racked up thousands of dollars in phone bills they would never be able to pay. After lots of complaints, the government intervened.) The company lured callers with the promise of three free minutes, but as soon as they heard the beep, the meter started.

As a professional phone psychic, I would earn $7/hour until I logged in 20 hours of calls. Then I would get a bump to $8/hour. The ultimate goal was to work my way up to $15/hour while the company pocketed the rest. I never made it that far.

The trainer had also suggested that I create a nom de phone. So clients knew me as Anita, the name of one of the nurses at UCLA Medical Center who cared for my father in the first days after his liver transplant. I associated her with kindness, healing and nurturing, a good omen. At the beginning of each conversation, I told callers to ask me a question, shuffled tarot cards and tried to interpret what they meant.

Anita had only positive things to say about everyone's future. Trust me, no one wanted to hear otherwise. I had never called a psychic hotline, but Mom's friend Grace had read for me in person. (She didn't use cards.) Positive or not, I didn't always agree with what she said. Naturally, I liked the occasional bits of conversation when she told me the things I most wanted to hear, like that I was going to (eventually) find lasting love.

So I gave every card a positive spin. "Oh, I see we've pulled that Death Card. How exciting! You've overcome a lot. This means good things are going to happen for you."

In response to what most women wanted to hear, I said: "Well, of course you'll find love. And soon."

And for men: "A new career opportunity will give you lots of options and more money."

About half of the callers were onto me immediately. They would tell me that they thought this was nonsense and that I was a fraud. The first surly customer I encountered pummeled me.

"Thank you for calling. This is Anita. Is this your first reading?"

"I don't believe in this garbage," Angry Man said.

"I'm so sorry you feel that way," I said in the most chipper tone I could muster. "Have you had a reading before?"

"I'm shuffling my tarot cards." My voice got higher. "Now ask me a question, and we'll see if they can give you some of the answers you're looking for?"

I panicked. The trainer said that if too many calls ended before the three-minute grace period, and monthly calls didn't average a minimum of 10 minutes, the company would dump me.

So I tried a different tactic, agreeing with people's concerns about psychics and 900 numbers and convincing them that I only spoke about what the cards revealed (as if I actually understood how to read them properly). People liked the idea of the cards having power instead of me. Some customers still screamed and quickly hung up. But a surprising amount of skeptics enjoyed telling me off for several minutes to vent their disgust while intermittently asking about their futures.

But I began to realize why I got rejected from the theater program in college. My role-playing skills sucked. This job came more easily to others. My friend Russ, a talented actor, worked for another psychic hotline. He thoroughly enjoyed perpetrating a fraud. He told me that he started each call by saying that he just drank a vial of lamb's blood to give him fortune-telling superpowers.

"You can't be serious. Does that really work?"

"Some idiots believe me," he said. "But most people just think I'm funny, and we wind up having a nice talk."

A few of my calls lasted an entire hour and consisted of me reassuring the person on the other end of the line that everything would be OK. Those folks really didn't give a damn about psychics or readings. They just wanted to talk to a friendly voice. Some people had terrible problems and cried a lot. I had a list of crisis hotline numbers to give to those who confessed to thoughts of suicide and other equally alarming problems. I kept these calls short, told the troubled souls on the other end of the connection to save their money and gave them toll-free numbers for help.

An 18-year-old caller from Alaska helped me more than I helped him. He wanted to know if he should enlist in the military so he could pay for college. He talked about the long, dark days of Alaskan winters and the exciting prospect of being stationed in a warmer climate. He spoke longingly about the way this choice would take him to places he had never seen. He didn't have any money, and his parents were gone.

I cringed. How was this poor guy ever going to pay for this call? My stomach hurt. I identified with his uncertainty, his searching for a place to fit in, and his desire to escape, but I had a safety net. He didn't. That's when it occurred to me that I had no business trying to guide anybody's major life decisions. I had enough trouble with my own.

"So what do the cards say, Anita?" He sounded so hopeful.

I stared at the untouched deck in front of me. "Honestly, I don't know. I think you should talk to your friends and relatives. Or maybe ask your pastor for advice."

We had only been on the phone for eight minutes, but I told him I had to go. He didn't get mad, which actually made me feel worse. That's when it dawned on me that burger flippers, toilet scrubbers and those who facilitate elephant mating had cleaner jobs (and probably took more pride in their work) than I did. My psychic days ended with that call.

In retrospect, the only satisfying tête-à-têtes during my stint as a telephone psychic came from errant horn dogs who thought all 900 numbers were created equal.

"Hi!" I began. "What is your question for me today? What would you like to know about your future?"

"Well, aren't you nice! What would you like to find out about today?"

"You know what I'm doing?" he said, panting.

Once I met my 10-minute minimum, I gave up trying to steer the conversation toward my fake tarot reading. "Oh yeah, I know."

"Well, what do you think about that? Do you like it, baby?"

"Fine by me," I replied. "You're the one who's getting screwed."