Iraq War veteran on Manning, the media and the military 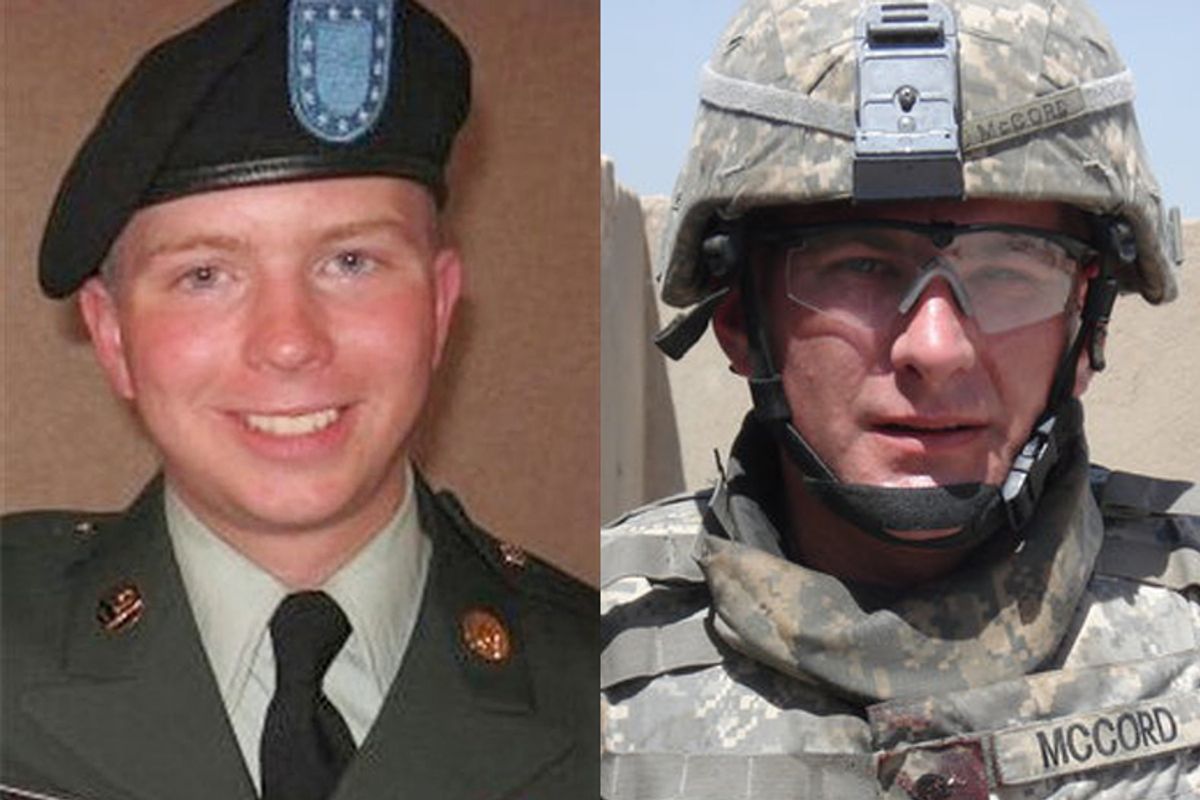 Last week, New York Magazine published a somewhat tabloidy profile of Bradley Manning by Steven Fishman, focusing on the purported personal and psychological aspects of his life as a means of understanding his alleged leaking, and I responded to it the following day.  Now there is another response that I hope as many people as possible read; with permission, I'm publishing it in its entirety below.  It's by former Army Specialist Ethan McCord, who served in Bravo Company 2-16, the ground troops involved in the "Collateral Murder" video released by Wikileaks in April of last year and allegedly leaked by Manning (McCord can be seen in the video carrying the wounded children from the bullet riddled van).  Just consider what Spc. McCord says about Manning ("a hero of mine"), the media coverage of these leaks, and what all of this reveals about American wars and how we're propagandized about them:

Serving with my unit 2nd battalion 16th infantry in New Baghdad Iraq, I vividly remember the moment in 2007, when our Battalion Commander walked into the room and announced our new rules of engagement:

"Listen up, new battalion SOP (standing operating procedure) from now on: Anytime your convoy gets hit by an IED, I want 360 degree rotational fire. You kill every [expletive] in the street!"

We weren't trained extensively to recognize an unlawful order, or how to report one. But many of us could not believe what we had just been told to do. Those of us who knew it was morally wrong struggled to figure out a way to avoid shooting innocent civilians, while also dodging repercussions from the non-commissioned officers who enforced the policy. In such situations, we determined to fire our weapons, but into rooftops or abandoned vehicles, giving the impression that we were following procedure.

On April 5, 2010 American citizens and people around the world got a taste of the fruits of this standing operating procedure when WikiLeaks released the now-famous Collateral Murder video. This video showed the horrific and wholly unnecessary killing of unarmed Iraqi civilians and Reuters journalists.

I was part of the unit that was responsible for this atrocity. In the video, I can be seen attempting to carry wounded children to safety in the aftermath.

The video released by WikiLeaks belongs in the public record. Covering up this incident is a matter deserving of criminal inquiry. Whoever revealed it is an American hero in my book.

Private First Class Bradley Manning has been confined for over a year on the government’s accusation that he released this video and volumes of other classified documents to WikiLeaks -- an organization that has been selectively publishing portions of this information in collaboration with other news outlets.

If PFC Bradley Manning did what he is accused of doing, then it is clear -- from chat logs that have been attributed to him -- that his decision was motivated by conscience and political agency. These chat logs allegedly describe how PFC Manning hopes these revelations will result in "worldwide discussion, debates, and reforms."

Unfortunately, Steve Fishman's article Bradley Manning's Army of One in New York Magazine (July 3, 2011) erases Manning’s political agency. By focusing so heavily on Manning's personal life, Fishman removes politics from a story that has everything to do with politics. The important public issues wrapped up with PFC Manning’s case include: transparency in government; the Obama Administration's unprecedented pursuit of whistle-blowers; accountability of government and military in shaping and carrying out foreign policy; war crimes revealed in the WikiLeaks documents; the catalyzing role these revelations played in democratic movements across the Middle East; and more.

The contents of the WikiLeaks revelations have pulled back the curtain on the degradation of our democratic system. It has become completely normal for decision-makers to promulgate foreign policies, diplomatic strategies, and military operating procedures that are hostile to the democratic ideals our country was founded upon. The incident I was part of -- shown in the Collateral Murder video -- becomes even more horrific when we grasp that it was not exceptional. PFC Manning himself is alleged to describe (in the chat logs) an incident where he was ordered to turn over innocent Iraqi academics to notorious police interrogators, for the offense of publishing a political critique of government corruption titled, "Where did the money go?" These issues deserve "discussion, debates, and reforms" -- and attention from journalists.

Fishman's article was also ignorant of the realities of military service. Those of us who serve in the military are often lauded as heroes. Civilians need to understand that we may be heroes, but we are not saints. We are young people under a tremendous amount of stress. We face moral dilemmas that many civilians have never even contemplated hypothetically.

Civil society honors military service partly because of the sacrifice it entails. Lengthy and repeated deployments stress our closest relationships with family and friends. The realities, traumas, and stresses of military life take an emotional toll. This emotional battle is part of the sacrifice that we honor. That any young soldier might wrestle with his or her experiences in the military, or with his or her identity beyond military life, should never be wielded as a weapon against them.

If PFC Bradley Manning did what he is accused of, he is a hero of mine; not because he's perfect or because he never struggled with personal or family relationships -- most of us do -- but because in the midst of it all he had the courage to act on his conscience.

Shortly after the Collateral Murder video was released, I interviewed McCord's fellow Specialist in that company, Josh Stieber, who said much the same about what this video revealed: as he put it, what was depicted in that video "is a very common occurrence" (that interview with Stieber took place just days after a Democratic Party loyalist-warcheerleading-chickenhawk invoked trite Rovian demonizing rhetoric to accuse me of hating The Troops for pointing out the same fact; beyond Stieber and McCord, I have lots of strange company when it comes to making this observation about American wars).

This view of Manning as heroic by a fellow Iraq War veteran is hardly surprising; after all, some who witness first-hand both the pervasive wrongful conduct in which soldiers are ordered to engage, combined with the passive acquiescence of most who witness and participate in it, will understandably view the leaker of these materials as heroic for taking action to stop it even upon substantial risk to their own liberty and possibly life.  As I wrote last week about Fishman's article:

The notion that [Manning's] reactions to wholly unjustified, massive blood-spilling is psychologically warped is itself warped. The reactions described there are psychologically healthy; it's far more psychologically disturbed not to have the reactions Manning had. There are countless people who knew from the start, or who ultimately concluded, that the Iraq War was an act of supreme barbarism. Many who so concluded -- especially among our political and media elite -- did nothing to stop it or bring accountability for those who caused it; Manning, by stark and commendable contrast, took action. Which is the psychologically suspect behavior? Manning was clearly motivated by the principle attributed by the New York article to Julian Assange, but espoused by countless heroic activists and philosophers throughout history: "Every time we witness an act that we feel to be unjust and do not act, we become a party to injustice."

The morality at play in the Manning persecution is mangled beyond belief. It's perfectly conventional wisdom that the war in Iraq was an act of profoundly unjust destruction, yet normal, psychologically healthy people are expected to passively accept that there should be no consequences for those responsible (a well-intentioned policy mistake), while one of the very few people to risk his life and liberty to stop it and similar acts is demonized as a mentally ill criminal. Similarly, the numerous acts of corruption, deceit and criminality Manning allegedly exposed are ignored or even sanctioned, while the only punished criminal is -- as usual -- the one who courageously brought those acts to light. Meanwhile, Americans love to cheer for the Arab Spring rebellions -- look at those inspiring people standing up to their evil dictators and demanding freedom -- yet the American government officials who propped up those dictators for decades and helped suppress those revolts, including the ones currently in power, are treated as dignified statesmen, while a person who actually exposed those tyrants and played at least some role in triggering those inspiring revolts (Manning) rots in a prison after enduring 10 months of deeply inhumane treatment.

The same can be said of our other ongoing and escalating wars.  McCord's letter was submitted to New York, and that magazine will apparently publish portions of it as a Letter to the Editor; we'll see which portions find the light of day.  Either way, the world needs far more of McCord's experience-based observations -- that the U.S. Government routinely engages in pervasive corruption, deceit, and illegality in secret, and those who shed light on it are heroic -- than we do more meandering speculation about Bradley Manning's relationship with his father and struggles with sexuality as a means of degrading this highly political and commendable act into some sort of symptom of emotional instability and mental illness.  Those latter afflictions are demonstrated far more by acquiescence to (and support for) these acts and the leaders who perpetrate them than they are by meaningful dissent from and opposition to these policies.  Anyone who doubts that should read Ethan McCord's letter.


UPDATE:  In the wake of the Pentagon Papers leak, the Nixon White House engineered a break-in of the office of Daniel Ellsberg's psychiatrist because depicting him as mentally ill was the strategy of political leaders to discredit him and distract from the substance of his leaks.  Now, political leaders need not do that because they have the exceedingly subservient establishment media to do it for them -- hence the front-page publication by The New York Times on the day WikiLeaks released the Iraq War documents of the sleazy hit piece by John Burns depicting Julian Assange as a paranoid, mentally unstable loser, followed by the current media fixation on doing the same to Bradley Manning. The hallmark of political and media establishments is to depict meaningful dissent from its orthodoxies as a form of mental illness, and conversely, acceptance of (or at least acquiescence to) its orthodoxies as a requirement for mental health (even when, as is true now, its orthodoxies are themselves warped and ill).

That tactic is as old as establishments themselves, though it's now most aggressively enforced by the "watchdog" media.  It's the media, rather than political leaders, which take the lead in serving most of the interests of the political establishment -- not just by depicting opponents of the political order as mentally ill but also uncritically disseminating its fear-mongering campaigns:

Who needs White House fear-mongers, propagandists, plumbers and character assassins when so many in the establishment press compete so vigorously to perform those functions instead?