What Mitch McConnell, Michele Bachmann, and John Boehner are saying -- and what they really mean 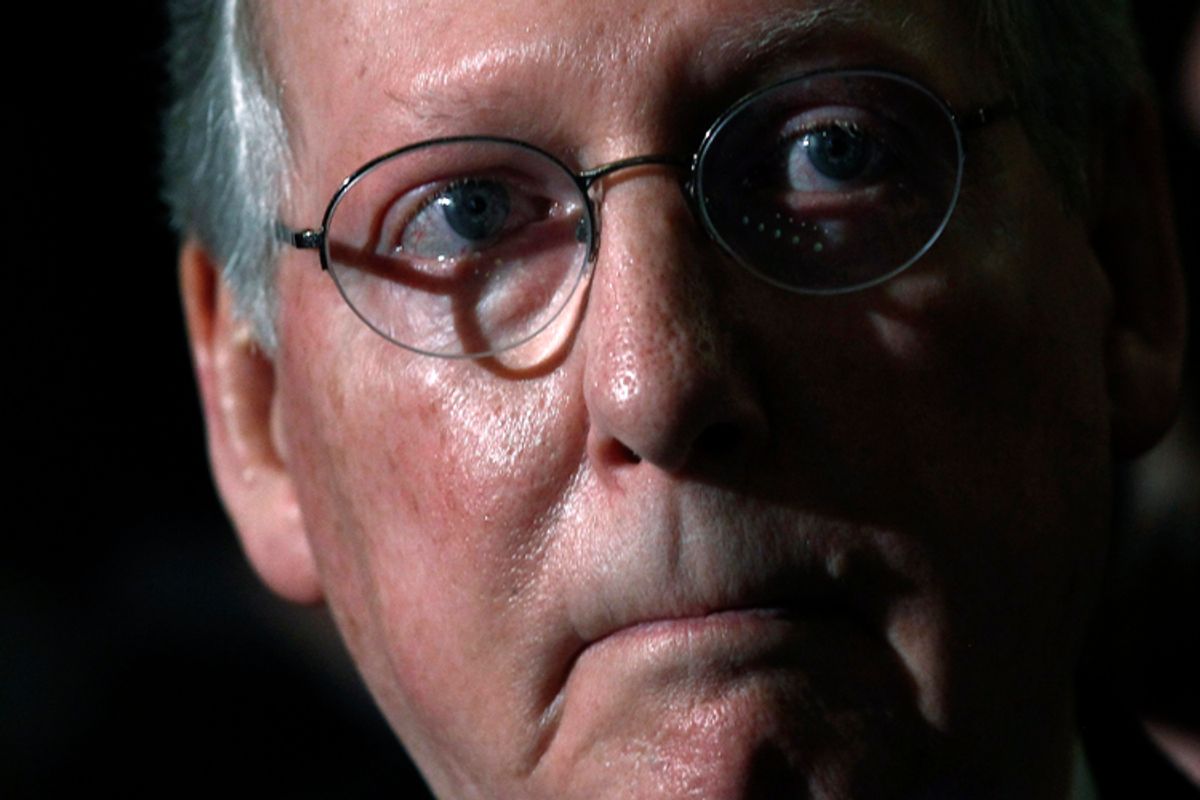 Call me crazy, but if we set aside the question of whether or not we agree with the massive concessions offered by President Obama to get a debt ceiling deal, it seems clear to me that he has made a real proposal: Big cuts in return for smaller tax increases. The Republican response, however, has been a little more difficult to interpret, because, on the surface, it just seems utterly disconnected from reality.

So here's a little translation guide to help readers get some clarity.

Michele Bachmann, explaining the only circumstances under which she would vote for raising the debt ceiling.

"They'd have to cut an enormous amount, including they would have to defund Obamacare," she said on Fox News in response to a question about the circumstances under which she'd vote to raise the debt ceiling. "Because that's the largest entitlement in the history of the country."

My solution to bringing down the budget deficit is to get rid of the only part of the social safety net that is (a) paid for and (b) projected by the Congressional Budget Office to actually reduce the deficit.

Senate Majority Leader Mitch McConnell, explaining why there will be no "real solution" to the debt problem.

"After years of discussions and months of negotiations, I have little question that as long as this president is in the Oval Office a real solution is probably unattainable," Senate Republican leader Mitch McConnell said on the Senate floor.

As long as the president of the United States -- a Democratic politician who has already agreed in principle to bigger cuts in Medicare and Social Security than any previous Democratic occupant of the White House -- as long as he continues to refuse to unilaterally give in to every single one of our demands, we will continue our policy, established on the very first day of his presidency, of opposing with all our force everything he does.

"Where's the President's plan?" asked House Speaker John Boehner (R-OH) at a press stakeout after a GOP caucus meeting. "When's he going to lay his cards on the table? This debt limit increase is his problem."

OK -- this one is kind of hard. The president offered a plan last week and, at least as far as outraged members of his own party are concerned, laid his cards on the table. And since it is House Republicans who are refusing to raise the debt ceiling, thus putting at risk the credit of the United States, you would think that maybe, just maybe, Boehner bears some responsibility for the current mess.

But here's my best shot.

I would love to cut a "grand bargain" deal that would make a real stab at deficit reduction and prove that I am a real statesman. However, (a) such a deal would also be good for the president, which is bad for Republicans; (b) I have no actual power to make any deals because my caucus refuses to compromise on anything; and (c) House Majority Leader Eric Cantor is standing behind me with a knife ready to stab into my back. Therefore, my only option is to blame the president for my failures.

Hmm. Guess what -- rhetoric that looks insane on the surface, turns out to be equally insane when you dig down. This does not bode well for the future. We've got three weeks to go before the debt ceiling deadline, and if the last 24 hours are any indication, we'll all be gibbering madmen long before time runs out.