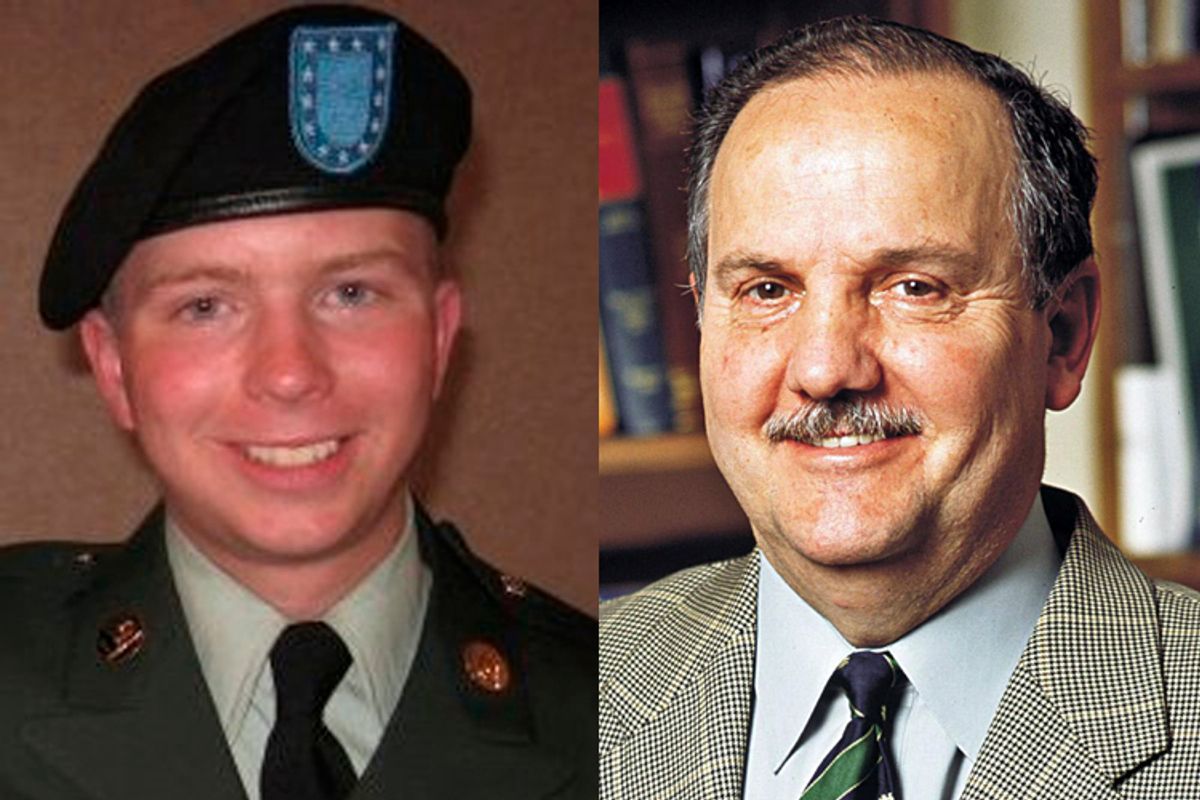 FILE - This undated file photo obtained by The Associated Press shows Bradley Manning, the U.S. Army private suspected of being the source of some of the unauthorized classified information disclosed on the WikiLeaks website. Army officials are opening the doors to a Fort Leavenworth prison where WikiLeaks suspect Pfc. Bradley Manning awaits further court proceedings. Manning was moved last week from the Marine brig in Quantico, Va., to the Joint Regional Correctional Facility in Kansas amid criticism over his treatment and confinement. (AP Photo, File) (AP)
--

In response to the growing controversy over the inhumane detention conditions of Bradley Manning, the U.N.'s top official on torture, Juan Mendez, announced last December that his office would formally investigate whether those conditions amounted to torture.  Since then, the Obama administration has steadfastly rejected Mendez's repeated requests to interview Manning in private: something even Bush officials allowed for "high-level" Guantanamo detainees accused of being top Al Qaeda operatives (see p. 3).  Now, Mendez is publicly accusing the Obama administration of violating U.N. rules by refusing him private access to Manning:

The United Nations' torture investigator on Tuesday accused the United States of violating U.N. rules by refusing him unfettered access to the Army private accused of passing classified documents to WikiLeaks.

Juan Mendez, the U.N.'s special rapporteur for torture, said he can't do his job unless he has unmonitored access to detainees. He said the U.S. military's insistence on monitoring conversations with Bradley Manning "violates long-standing rules" the U.N. follows for visits to inmates. . .

Mendez said the U.S. government assured him Manning is better treated now than he was in Quantico, but the government must allow the U.N. investigator to check that for himself.

Mendez said he needs to assess whether the conditions Manning experienced amounted to "torture or cruel, inhuman or degrading treatment or punishment" while at Quantico.

"For that, it is imperative that I talk to Mr. Manning under conditions where I can be assured that he is being absolutely candid," Mendez said.

During the Bush years, the pronouncements of the U.N.'s rapporteur for torture were widely hailed in progressive circles, but caring about what the U.N. thinks -- like concerns over detainee abuse -- is so very 2006.  After all, look over there: it's Michele Bachmann [speaking of things that are very 2006, Human Rights Watch (remember them?) has issued a report detailing that the Obama administration is in flagrant breach of its treaty obligations (remember those?) by continuing to shield Bush torture crimes from all forms of accountability].  As for the Obama administration's strange refusal to allow a private U.N. interview with Manning -- something even Khalid Sheikh Mohammed was allowed by the Bush Pentagon in 2006 with the ICRC -- hasn't the Government taught us that you have nothing to hide if you've done nothing wrong?

In response to the front-page stories earlier this week in both The Washington Post and The New York Times reporting that President Obama was advocating cuts to Social Security, Medicare and Medicaid, some insisted that these stories should not be believed because they relied upon (multiple) anonymous sources.  Yesterday, Obama himself made as plain as he could that these stories were entirely accurate, as he said in his Press Conference:

And it is possible for us to construct a package that would be balanced, would share sacrifice, would involve both parties taking on their sacred cows, would involved some meaningful changes to Medicare, Social Security, and Medicaid that would preserve the integrity of the programs and keep our sacred trust with our seniors, but make sure those programs were there for not just this generation but for the next generation. . . . I mean, it’s not an option for us to just sit by and do nothing. And if you’re a progressive who cares about the integrity of Social Security and Medicare and Medicaid, and believes that it is part of what makes our country great that we look after our seniors and we look after the most vulnerable, then we have an obligation to make sure that we make those changes that are required to make it sustainable over the long term. . . . With respect to Social Security, as I indicated earlier, making changes to these programs is so difficult that this may be an opportunity for us to go ahead and do something smart that strengthens Social Security and gives not just this generation but future generations the opportunity to say this thing is going to be in there for the long haul.

For all but the most hardened and irrational apologists, that should settle this matter permanently: Obama is a full-scale advocate for cutting the crown jewels of the New Deal.  Yesterday, The Huffington Post reported -- based on "five separate sources with knowledge of negotiations -- including both Republicans and Democrats" -- that Obama had also offered to raise the Medicare eligibility age from 65 to 67.  When Joe Lieberman proposed something similar a short time ago, he was viciously denounced in Democratic circles as "needlessly cruel," among other things; indeed, when Lieberman merely blocked a lowering of the Medicare eligibility age during the health care debate, he was denounced with equal vigor.  Will there be any similar resistance from those circles now that it is Barack Obama doing this?