The man behind the Marriage Vow 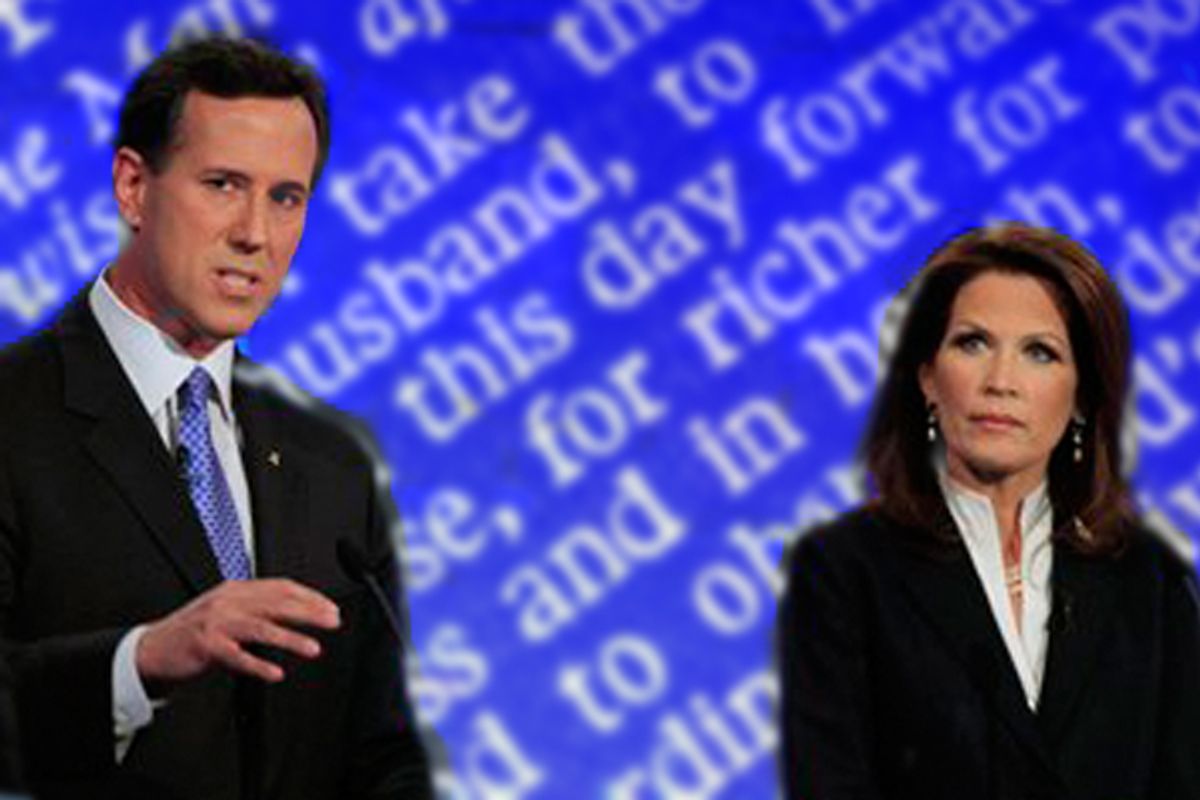 Presidential candidates are asked to sign pledges all the time, but the GOP primary has been roiled for the past few days by an uncommonly influential document -- the Marriage Vow: A Declaration of Dependence Upon Marriage and Family -- put out by an Iowa group, the Family Leader.

What is the group behind the vow?

The Family Leader was formed after the 2010 elections as a coalition of Iowa social conservative advocacy groups, with Bob Vander Plaats as its executive director and public face. Vander Plaats had become the best known conservative culture warrior in Iowa that year after receiving a respectable 41 percent of the vote in the GOP gubernatorial primary; his campaign focused on reversing a 2009 decision by the state supreme court allowing same-sex marriage. After losing in the primary, the fiercely anti-gay Vander Plaats led the successful campaign to oust three supreme court justices who had voted for the same-sex marriage decision. Now at the helm of the Family Leader, he has brought in presidential hopefuls for a speech series and is openly cultivating an image as Iowa kingmaker.

I spoke with Vander Plaats by phone Monday night to check in on the developments surrounding the Marriage Vow and the presidential contest in Iowa. The following transcript of our conversation has been edited slightly for length.

Can you tell me briefly what the purpose of the Marriage Vow is and why you decided it was necessary for this field of candidates?

Well, the purpose behind the Marriage Vow was to basically introduce a high standard, a standard we believe our leaders should strive to attain. To be quite frank, when we see Congressman Weiner, or Gov. Schwarzenegger or Gov. Sanford or Gov. Spitzer or Congressman Foley, it's a bipartisan issue. So we said, "Let's do a Marriage Vow that first and foremost talks about fidelity to your own spouse." And we're not trying to beat up anybody for past mistakes because we're a Christian organization -- we fully understand the need for forgiveness and redemption. We've all made mistakes in the past. This is about moving forward. So what we did is put together a comprehensive marriage vow that basically declares our nation's dependence on marriage and the family. Because we believe when you have healthy marriages, you have healthy families, when you have healthy families you have healthy economies, and then you have a healthy society.

So Rep. Bachmann and Sen. Santorum have committed to signing the vow or have signed it. But Mitt Romney hasn't responded yet. Would you be able to support him if he does not sign it?

What we've said is that a primary candidate for the office of president will not get our support if they can't sign this pledge. If they can't sign the pledge, we're going to ask them questions like, "Where's the issue you have with the pledge?" Because we want to have a discussion and a debate. And if for any reason they point out something we're just wrong on, then we'd admit it and say "OK, we're wrong on that." But we don't see that. That's why it's a fairly researched and supported and well-resourced document. Now, Huntsman says he's not going to sign any pledges. Romney we have not heard back from. We gave the candidates till Aug. 1. The reason is that we want them and their own policy teams to do their own research, take a look at what we concluded and then when they sign, they've really thought this deal out. With Congresswoman Bachmann and former U.S. Sen. Santorum, they read it and right away they said, "You know what, we see nothing in that pledge that we won't adhere to." So I think that kind of showed their executive leadership style.

On Romney, apart from this Marriage Vow, do you think his religion -- the fact that he's Mormon -- will be a problem at all among evangelical Christians in Iowa who might be skeptical of that?

You know, I've been asked that question a lot. In 2008, I was Huckabee's state chair in the state of Iowa. And I remind people, it wasn't the Mormonism that I think turned the people of Iowa off on Mitt Romney and why Huckabee won. Because Mitt Romney led the polls in Iowa for a long time, and he was a Mormon then as well. He leads the polls today in Iowa, and he's still a Mormon. I think what it was is that Iowans just had kind of a disconnect with Romney. They probably couldn't relate to him real well, but they could relate to Huckabee extremely well. And the other piece was, there seemed to be some inconsistencies with what Romney said and what his record was -- and then even what he said in one arena versus what he would say in another arena. And Huckabee was always consistent. I think those are the things that cost him way more than him being a Mormon.

You take a look at Mitt Romney's family, he and his wife, Ann, have a model marriage. It's probably a marriage that a lot of marriages could look up to. And they've raised five wonderful boys. So he has done well with his own particular family. I think it's something he could highlight.

There's one section in the pledge that says the candidate has to reject -- the phrase used is "Sharia Islam" -- can you describe what you mean by that phrase and what you want the candidates to reject in that?

And you see that as something that is a dominant thing in Islamic cultures and societies, or more of a historical idea?

No, there's a lot of American Muslims who reject Sharia. And we believe the president of the United States needs to be aware of some of the threats to our culture, and one of them is Sharia Islam in our opinion.

Another part of the vow that's gotten attention was the clause about promising to protect women and children from a long list of evils. Some of those things were obviously crimes -- human trafficking was one -- but there was also pornography. What would you say to people who don't see pornography as a threat to women? And secondly, do you think only women need to be protected from pornography or should men be, too?

Well, I think if you read in that, there's also the word "coercion" -- "coerced." I don't have the vow in front of me right now, but I think if you read that it's going to talk about coercion as it relates to abortion, prostitution, pornography. What we're trying to do is have a high standard for women and for children, as well as for marriages and for family.

Some people were saying that the pledge was somehow calling for a ban on pornography, is that what it was intended to do?

No, not at all. I think if the Family Leader could have its way, we'd probably say we'd like to have a ban on pornography. But that's not the vow. The vow was [about] forcing women into pornography.

Gary Johnson released a statement today attacking your group. He says "This 'pledge' is nothing short of a promise to discriminate against everyone who makes a personal choice that doesn't fit into a particular definition of 'virtue.' " He also says, "Government should not be involved in the bedrooms of consenting adults." Do you want to respond to him?