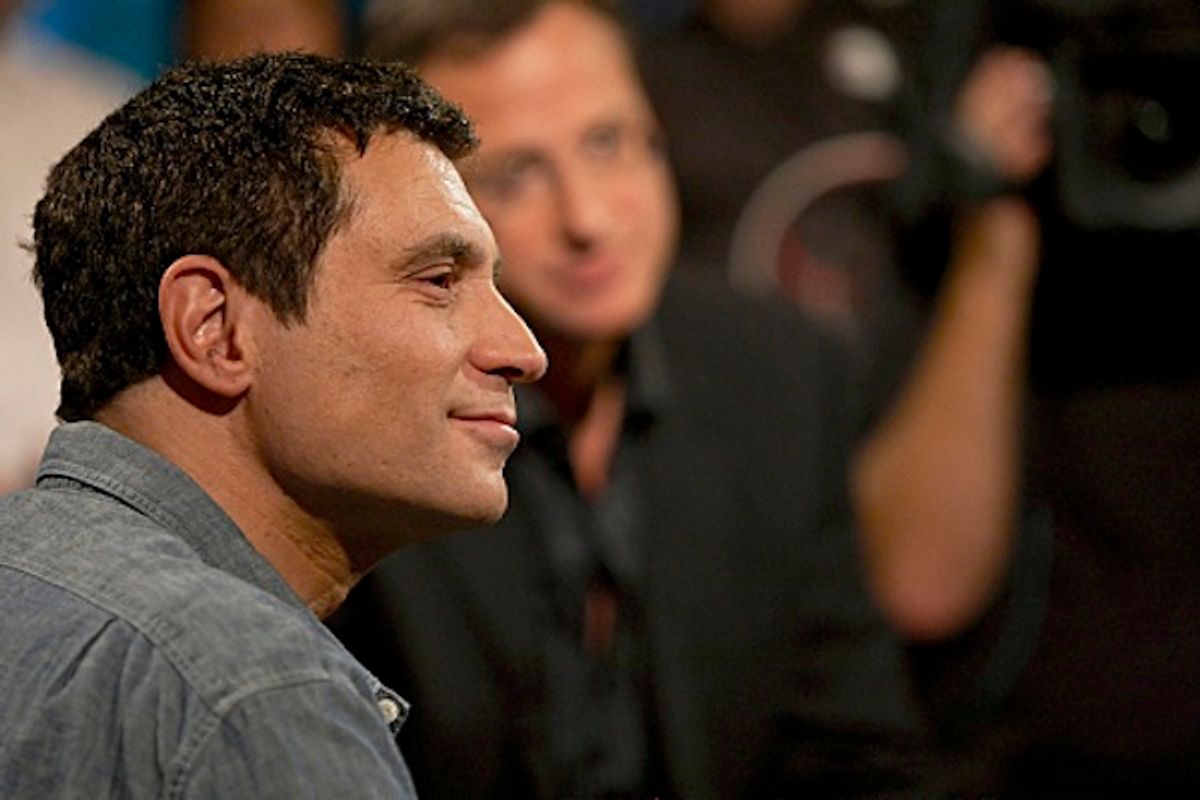 Paul Provenza knows what makes comedians laugh. He is, after all, the director of 2005's "The Aristocrats," the ultimate behind-the-scenes look at the blue jokes that get seasoned veterans chuckling. His program on Showtime, "The Green Room With Paul Provenza," premieres its second season this Thursday. It's a sort of comedy version of "Inside the Actor's Studio" with Paul as James Lipton and a roundtable of funny people that can include anyone from Penn Jillette, Eddie Izzard and Bo Burnham to the Smother Brothers.

Decades of the stand-up circuit and green-room jokes have given Paul a unique angle on the recent trouble that has plagued comedians like Tracy Morgan and Gilbert Gottfried. When I sat down with Paul, he had a different take on  "offensive humor" than you'll find among most people. But then again, Paul does have a warning before his shows that amounts to "If you get offended easily, don't stick around."

A lot of comedians tell off-color jokes. Why do you think some get singled out?

What's fascinating is how random it is -- who gets in trouble and who doesn't. A number of comedians have said this, and it goes back to the thing about Michael Richards. Regardless what you think about what he said, or what was going on -- and you can try to get in his head and figure out his motivations, Is he a racist or did he just make a bad comic choice? -- whatever you think is irrelevant. The point is that probably happened 50 times in clubs across America that night, but it wasn't captured on video and it wasn't made by a celebrity. A lot of it has to do with celebrity more than anything else, because you don't see anybody get upset about somebody who is not famous doing something like this.

Well, apparently with the Tracy Morgan joke, it came out afterwards that one of Chelsea Handler's comedians said something similar ...

That this other guy didn't get in trouble because he's not famous.

It's not about the righteousness behind political correctness. It's not about the politics, or the medium in which it happens. It's all about celebrity. The only people who ever get taken to task for it are celebrities.

Do you see your show then as a place where people have more freedom, as celebrities, to speak?

Oh sure. When Patrice O'Neill was on an episode last season, Roseanne was saying to him, "Why do you use the word 'nigger' so much?"

And I was like, "So do I!" And so we kept going on, and then we got into a fight, but there weren't torches or pitchforks coming after anybody.

Your show is premised as, "We're all just people talking." So that makes otherwise offensive humor more acceptable?

Yes, yes. If you have black friends or Indian friends or friends of color, there's not a single white person in a relationship of any kind, whether it's friendship or marriage, that doesn't joke around about it all the fucking time. You never have to worry about how it's interpreted, so that's when it's most comfortable. People know who you are and where it's coming from; you have a history together so it's not out of left field like, "All of a sudden you're a racist now."

Exactly, exactly. The weird thing about it is that there comes a point when you can really make jokes like that because the [race] issue isn't there anymore – that to me is beautiful. It's the outsider [viewer] that doesn't know we're close enough to be this open with each other.

Have you ever felt that there was a moment, either on the show or when you're doing stand-up, when something has been taken the wrong way?

Yes. The word "fag" is very interesting, because I grew up in the '60s and early '70s in the Bronx. We used the word "fag" all the time. We had no idea – it had nothing to do with homosexuality. A fag was a pussy, a chicken, a kid who didn't have the nerve to ring the doorbell and run away. "Come on you faggot," that's all it was. When I found out that it had a sexuality component I was like, "Really?" I didn't even know. I don't know how that happened, but to me the word "fag" doesn't mean "homosexual," and that's not a pejorative term, "homosexual."

Was this on the show?

It was after the show.

Right, right. But that's an example of the kind of thing where the word I'm using isn't the word you're saying I shouldn't say. It's a different word.

Do you think it's unfair when people take these things out of context?

I say at the beginning of the show that if you're going to be offended by anything, don't stick around. If you want to complain about anything after that, you're simply not allowed to. You can't – I'm not interested in it, I have no response to it, I don't care, because I told you that this was going to upset you if you're that kind of a person, so you have only yourself to blame.

Would you ever have somebody like Tracy Morgan on to talk about what happened?

I would love to, because the Tracy Morgan thing is so interesting. You always hear comedians say, "Yeah, I was in Texas so I couldn't do this material because they just weren't going to understand it the right way." Bill Burr talks about that some in "Satiristas," where he said there are some things you have to frame differently, because people won't understand it the way I intend it to be understood. He said, for example, if he did something in the Northeast about his black friends he grew up with in Boston, they hear it the way that he intended. But if he did that Texas, they hear it in the way they understand it, and that's not our point at all, so we have to rework it for the context of these people in this part of the country.

What I think is interesting is we don't have the exact words of what went on in that Tracy Morgan show: We have somebody's interpretation, which they put on Facebook. Which is their right, to express their views online. But then the national media picks up the story, and we still don't have an exact account of what was said during his show.

Sure. And we're all having this conversation in the abstract off of one guy's opinion. The guy next to him could have said, "Well, I thought it was hilarious."

Well, it's not just in comedy clubs. We've seen comedians get in trouble for posting on Twitter too.

It's very dangerous, like [what happened with] Gilbert Gottfried [losing the Aflac duck account after tweeting a joke about Japan's tsunami]. I was talking to Gilbert about this, and I said, you were writing jokes for your friends and then broadcasting them to 300 million people in America, that's the problem here. There's nothing wrong with you and nothing wrong with the people who are offended by it. The problem is that you forgot.

Context is everything. Carlin talked a lot about context – he said your context involves what your audience knows about you when they go to buy the ticket: your past work, their fondness for you, their relationship to you as an artist. So that also factors into what you can get away with, and what you can't get away with. I can get away with a lot more than some other people because I've never censored myself, and the people that come see me expect me to cross boundaries. That's the context that I created for myself as an artist.

What did Gilbert actually lose? He lost an advertising deal, but I assume his reputation amongst comedians and the people who see his work was not really affected.

No. And that's a much easier one that the Tracy Morgan thing to parse, because all Gilbert lost was money. And there's nothing wrong with a corporation saying, "We don't want our brand tarnished by your activities, so we fired you." That's what happens if you're going to lie down with the dogs. If you're going to take big money from a corporation as a comedian, that's the price you pay. They're going to cut your balls off.

So that's an internal, job-related issue of him losing the Aflac account…

Far worse. But that is no position to be in as a comedian. If you've made yourself a very high-paid corporate employee, one of your responsibilities is not to embarrass the corporation. You embarrassed the corporation in their own backyard, 75 percent of their business is from Japan, that's the price you pay.

Do you think there has to be an apology to the public after that?

Fuck no! For just telling jokes? If you offend somebody as a comedian, you have two options. You say, "Oh, I'm sorry, I really didn't mean to hurt your feelings," or you sit there and go, "It's just a joke, why do you have to get so upset about it? Who suffers from this?"

And the true irony is, I have a friend who does a lot of business in Japan, and he said you go into any bar or nightclub in Japan, and everybody is making tsunami jokes. You deal with it! But Gilbert's the bad guy. So what, is it timing? Well, whose timing?

What's that old comedy joke about timing? Well, the Internet kind of gets rid of that.

Totally, totally. All of these constructs of what's appropriate, when it's "too soon" … they're different for every individual. What you see a lot in all of this is people trying to impose their sensibility as if it represents everybody.

Do you think the political correctness thing that happened in the '90s is getting worse now because of these new mediums?

It's getting worse now because it's now become a game of catch, or tag. Tag, you're the asshole this week. And I have no evidence bearing this out, but I feel it very strongly, it's a lot of self-righteous people who don't do jack-shit about the things they care about. Who can go, "Oh, I did something good by walking out of Joe Schmoe's show at the Chuckle Hut when I was offended by his racist comments." But meanwhile they're completely unaware of the racism that exists in our legal system. They still vote to keep drug laws in place because they don't want their kids to do drugs when the drug laws are completely fucking racist. They still buy clothes manufactured in places where genocide is happening.

So it gives people a chance to pretend like they've actually done something moral and righteous, and gives them the opportunity then to ignore anything of real substance, and then go about their complacent, ignorant lives and feel good about themselves.