Should kids be banned from restaurants?

A Pennsylvania establishment tells its patrons to leave their children at home -- is it right? 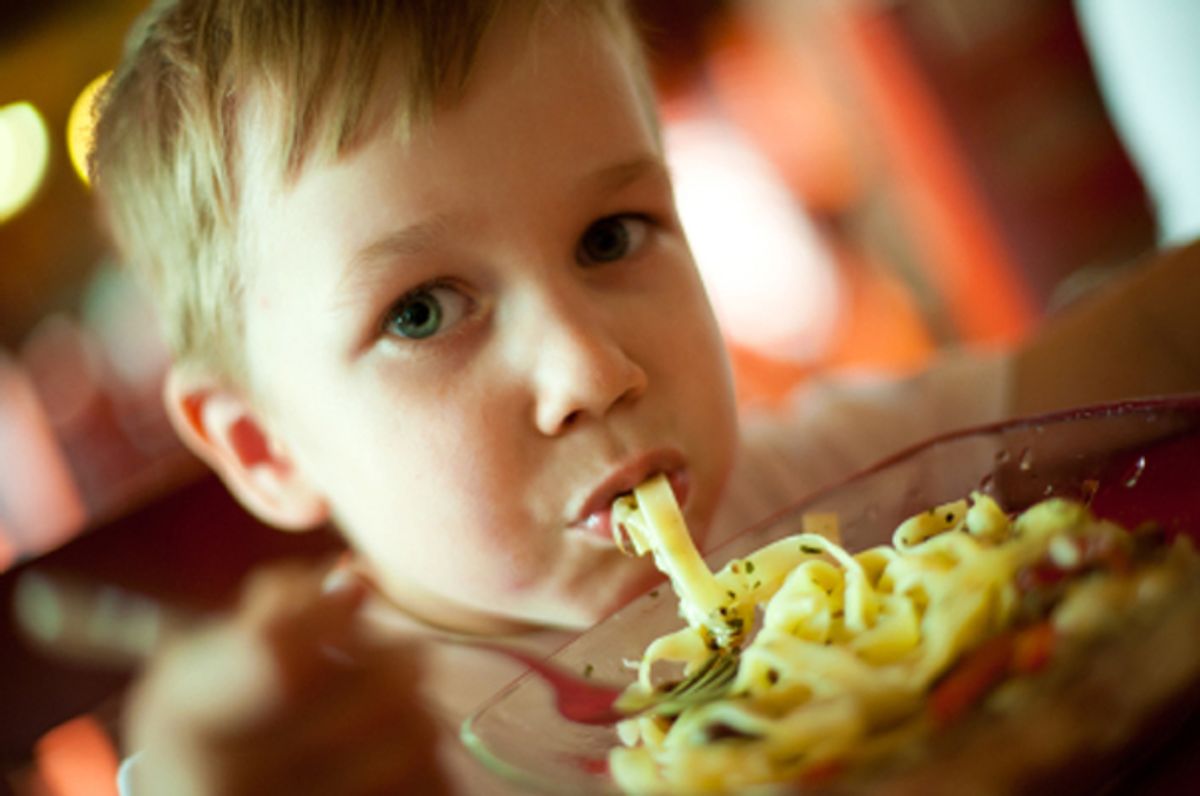 Breeders, your rugrats are no longer welcome at McDain's of Monroeville, Pa. This week owner Mike Vuick sent out the word to his customers via email that "Beginning July 16, 2011, McDain's Restaurant will no longer admit children under six years of age. We feel that McDain's is not a place for young children. Their volume can't be controlled and many, many times, they have disturbed other customers." Apparently referring to the under-6 set, Vuick then told a local news team: "There may be restaurants that prefer to cater to such things. Not here." No loaded fries for you, kids!

The argument over where kids do and do not belong is inevitably a heated one, with fierce feelings on both sides. In one corner are the folks who believe that if you pay for an experience, you are entitled to have your meal/flight/movie undisturbed by toddler shrieks. And in the other corner are those who'd say that having children shouldn't condemn anyone to never going out, or sticking strictly to Chuck E. Cheese. At their extremes, they represent the dueling forces of intolerance and entitlement.

If it's your business, you're free to set an age limit on your clientele. Vuick, whose bar and restaurant is within his "World's Greatest Driving Range," told reporters this week that "I've noticed … there are certain parents who can't leave their children at home. You know, their child -- maybe as it should be -- is the center of their universe. But they don't realize it's not the center of the universe." That's the kind of statement that doesn't come out of nowhere. That's the voice of a man who has had it with some out-of-control patrons and their parents.

I can only imagine the frustration of a host who's trying to create a peaceful environment for all his dining guests. The fact that I have a uterus hasn't rendered me immune to the disruptions of children who run around a restaurant like it's the ball pit at Ikea, or whose parents flip open a DVD player and treat everyone within earshot to the adventures of "Bob the Builder." But who's to say that a baby who sleeps peacefully from the salad to the cheese course is inherently more obnoxious than a drunken bunch of frat boys, or Miss Loudly Talking on Her Phone? Just a reminder -- people with kids aren't the only ones who don't always behave appropriately.

Staying at home is not and should not be the only option for the first decade or so of a human's life. Kids need to be in the world to learn how to function in it. When my children were younger and we treated ourselves to an occasional restaurant meal, we showed up early, brought our own crayons, and assumed that at any sign of squalling, dinner would be interrupted so one parent could hastily remove the child from the scene while the other settled up the bill. Sometimes the evening went off without a hitch, and sometimes I never did get to my molten chocolate cake. Kids are a crapshoot that way.

It's possible that the locals around Monroeville have, during the nine years McDain's has been in business, assumed that a place that serves chicken tenders, individual pizzas, and "egg plant parmesan" [sic] would be the sort of family-friendly establishment one could bring the gang on a Friday evening. It's just as possible that many of them do indeed know how to behave with consideration and manners. That's the limitation of sweeping policies. They turn the socially unacceptable behavior of the few into the rule that gets applied to the many. And now that they're ready to institute it, it'll be interesting to see how McDain's plans to go about enforcing it. In trying to alleviate one headache, Vuick may find that keeping out patrons who look a day under age 7 might just be a whole new one.