The marriage pledge and the debate the GOP refuses to have 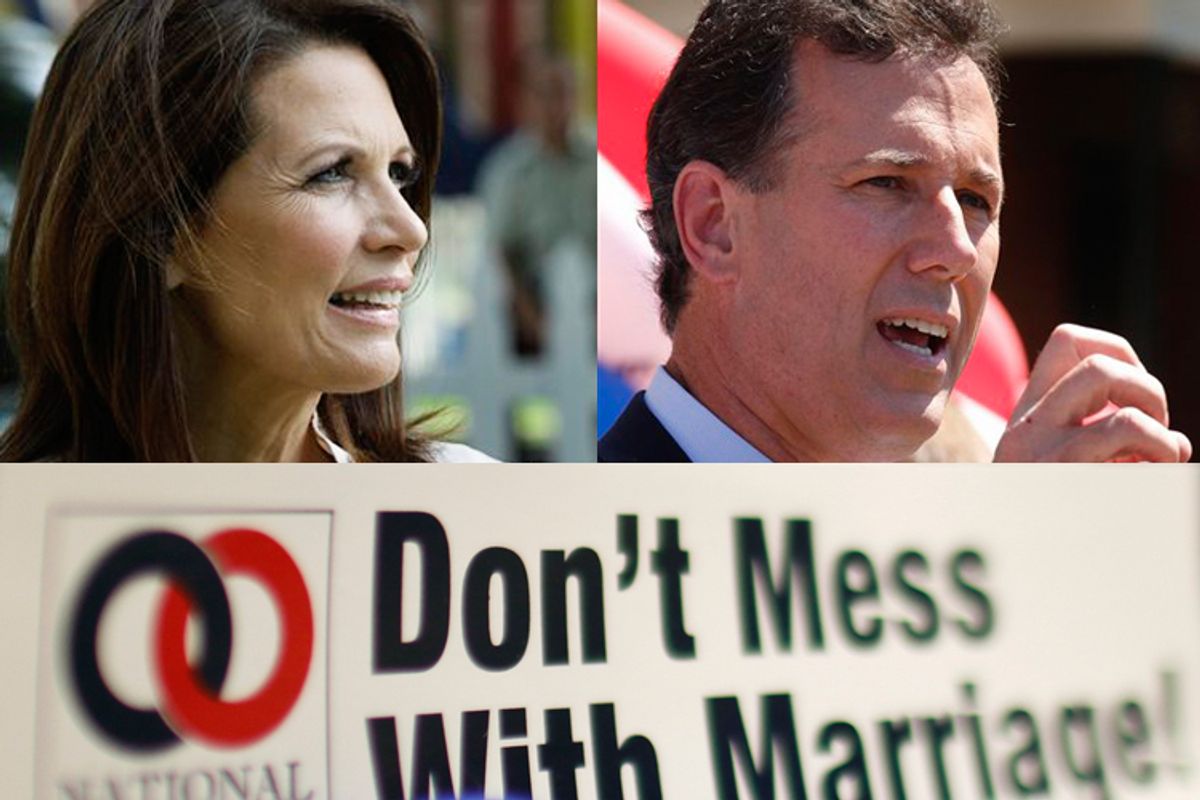 Michele Bachmann signed (and Rick Santorum "committed to") that disgusting "pledge" circulated by an Iowa religious right group. The pledge essentially declared that black people were better off when they were slaves and demanded that women be protected from "seduction into promiscuity." Candidates were also required to promise to ban all pornography.

Of course the ostensible point of the thing was to promise never, ever, ever to endorse marriage equality, and I wouldn't be surprised if other candidates signed it, now that the offending slavery language has been removed and apologized for. (Newt Gingrich didn't sign it -- yet -- because it required that the candidates swear a vow of marital fidelity, but he's willing to take another look if they change the language.)

There's one Libertarian candidate in the race for the Republican nomination who unambiguously rejected the pledge as bigoted, backwards nonsense. And it's not Ron Paul. Paul, the candidate who invented the GOP's new-found fixation on Liberty, is still considering the pledge. No, the only 2012 candidate refusing to pander to hateful trolls is Gary Johnson.

Johnson, the former governor of New Mexico, has thus far has been treated slightly worse than Jon Huntsman by the party and by the press, despite his being a young former two-term governor with actual extensive small-business experience. On paper he's the perfect Republican candidate -- for a Republican party that actually believed its own calculated, focus-grouped rhetoric about Freedom and Liberty and Small Government.

Johnson, of course, was excluded from the last debate even though he met CNN's supposed criteria for participation. The GOP already has its adorable, kooky Libertarian candidate, see? Sorry, Gary! But I'd much rather see Johnson up there than suffer through another Paul run.

Johnson has no shot at being president. One of his signature issues is drug decriminalization, which is obviously a just cause, but still not acceptable to GOP voters. But Tom Tancredo had no shot at being president, and in 2008 he was allowed to debate, and he injected his virulent xenophobia into the campaign. Ron Paul will never be president, but his presence ensures a lot of talk about the Fed.

Including Johnson would maybe mean introducing, to the GOP, the argument that liberty includes not just keeping the government out of your pocketbook, but also away from people's personal lifestyle choices, and women's bodies. (The current GOP position has it that the feds must never give doctors advice on how to treat Medicare patients, but Republican lawmakers know best when it comes to providing healthcare to women of child-rearing age.) Every other pro-choice and pro-gay Republican who ever ran for president backpedaled and begged forgiveness (by which I mean mostly Rudy Giuliani), so it'd be nice to have someone in that party demonstrate a bit of respect for women's rights. (Besides their right to be protected from "promiscuity," of course!)

Here is the thing: There are probably a number of people who consider themselves Republicans or former Republicans who would be very happy and excited to see a Republican candidate -- a credible one, with an extensive resume -- say that the party should stop pandering to the far-right Christianist bigots. And not even Ron Paul will go there.