Joe Scarborough is so mad at "media elites" 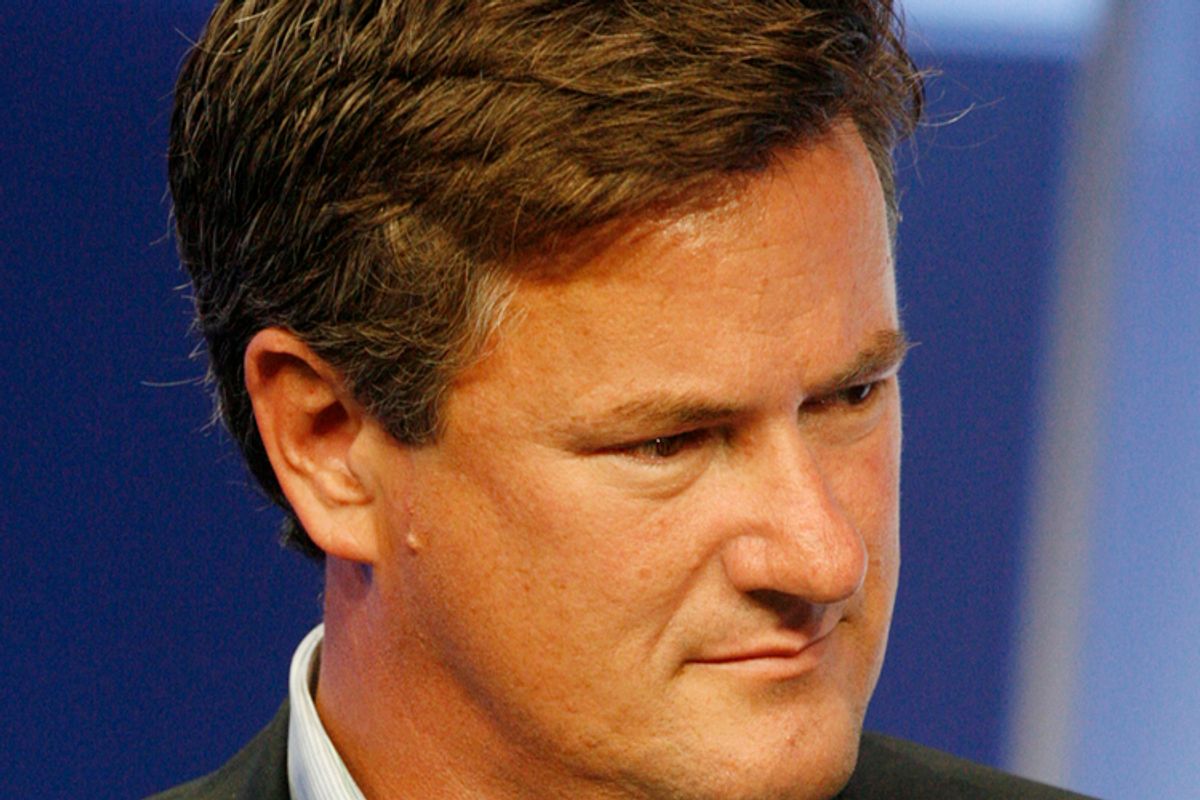 Joe Scarborough has an opinion column for Politico today in which he excoriates those damned "media elites" who keep "abusing" Republicans for refusing to "cave in to President Obama's demand to raise taxes." It is just as smart and well-written a column as you are probably imagining, based on that summary:

The reviews are in, and it’s safe to say that most media elites won’t be voting for Republican candidates in 2012. Of course, most of them voted Democratic in 2010, 2008 and in every other election in modern political history. But if you’ve scanned editorial pages and news shows in recent weeks, you know that this time conservatives have really, really offended the national press corps by their refusal to raise taxes.

Memo to Joe Scarborough: You host a political morning show on a 24-hour cable news network. You are a rich former politician who lives in Washington, D.C., and you write an opinion column for POLITICO. If you're not a "media elite" than I'm not sure who is.

What Scarborough is really upset about is the fact that Richard Cohen, Jon Chait and David Brooks said mean things about congressional Republicans who refuse to accept a deficit-reduction plan that involves actually reducing the deficit instead of raising the Social Security retirement age, a measure that is a longtime goal of the GOP but one that will not help the government right its fiscal ship, or whatever stupid metaphor deficit-obsessed media elites like Scarborough like to use.

Also, in their discussion of how the GOP is fanatically opposed to modest income tax increases or even the elimination of tax credits that are almost universally recognized as wasteful or actively harmful to the national interest, these pundits compared the GOP to other groups and organizations known for being fanatical. That really upset Scarborough.

Meanwhile, Chait — who once criticized mainstream Republicans for using an apocalyptical approach against their opponents — compared the GOP’s leadership to a terrorist organization that killed over 250 Marines in Beirut, tortured to death a CIA operative and a Marine colonel, kidnapped scores of Americans and hijacked TWA Flight 847.

I wonder why Chait and Democratic officials from past administrations feel the need to associate fiscal conservatives to bloodthirsty terror organizations. I also wonder how such inflammatory rhetoric does not qualify as the kind of politics that Chait himself criticized not so long ago.

Does anyone edit Morning Joe? He never quotes or even names any "Democratic officials from past administrations" in this column, unless David Brooks worked for Carter and I forgot about it. "Associate to" should be "compare to" or "associate with." Even "apocalyptical" could be the simpler and more common "apocalyptic." I know Scarborough isn't a professional writer. That's why newspapers employ professional editors. (Also: Politico apparently didn't hire anyone to replace Michael Kinsley as Scaborough's "liberal" counterpoint. No liberal is savvy enough to compete with Morning Joe, I guess.)

Cleaning up Scarborough's prose would do nothing for his argument, which is utterly beyond rescue.

For 50 years, the federal government has grown at a sickening rate. Whether Republicans or Democrats run the White House, Washington’s establishment always gets its way — bigger budgets, bigger deficits and higher taxes.

Haha, no, the deficit began shrinking under a Democratic president. Remember? You were in Congress at the time. You were elected in 1994 based on your promise to be fanatically opposed to the modest tax increases that led to the government running a surplus for the first time since forever.

Here's a paragraph that is just fundamentally dishonest:

Many Republicans now in Congress have been around long enough to see annual budgets explode from $500 billion under Reagan to $3.45 trillion under Obama. They have also seen the top marginal tax rate go from 28 percent under Ronald Reagan, to 31 percent under George H.W. Bush, to 39.6 percent under Bill Clinton, to 35 percent under George W. Bush. Considering that the size of Washington’s annual budget has doubled in the past decade, more than a few Republicans see no need to ask taxpayers for more money to feed the federal government’s voracious appetite for spending.

It's all pretty simple simple: If raising taxes and cutting spending is a bad thing to do when the economy sucks, then we should just raise the stupid debt ceiling and then raise taxes and cut spending later, when the economy doesn't suck as bad. If it is imperative that we tackle the deficit right now this very instant (and it isn't, but idiots like Scarborough and his "media elites" think it is) than we need to raise taxes (or "close loopholes") and cut spending. One party is very willing to do either of those options. (The Democrats would kill for a solution that looks "bipartisan," no matter how awful it is.) The other party revolted against its legislative leader when he proposed compromise, because the rank-and-file would rather default than violate their pledge to Grover Norquist.

Of course, at the end of Scarborough's column, he proposes that Republicans... raise taxes on rich people!

That doesn’t mean a grand bargain is out of reach this session of Congress. If Obama moves forward with specific cuts on entitlement programs and Pentagon expenses, Republicans must work aggressively to close loopholes that favor billionaires and multinational corporations. I am quite confident that even tea party members would be fine with Warren Buffett paying more than a 14 percent income tax rate and would be happy to see the world’s largest corporation, GE, pay more in taxes than their own household.

The thing is, Morning Joe, the Republican pledge that you are defending in this column forbids Republicans from asking Warren Buffett to pay more taxes. That is the entire point of it! Republicans refuse to "aggressively close loopholes," because Grover Norquist and anyone with a brain knows that that counts as raising taxes. If Republicans refuse to cave in to Morning Joe's demand that they raise taxes, will he say that they're merely responsibly keeping their solemn vow to the voters who elected them? Or will he say they're being unreasonable? Or maybe even a bit... extreme? I guess we'll see, once America defaults because David Brooks said a mean thing about Eric Cantor.