US more unpopular in the Arab world than under Bush

A new poll confirms prior ones: anti-American sentiment is now at dangerously - even unprecedentedly - high levels 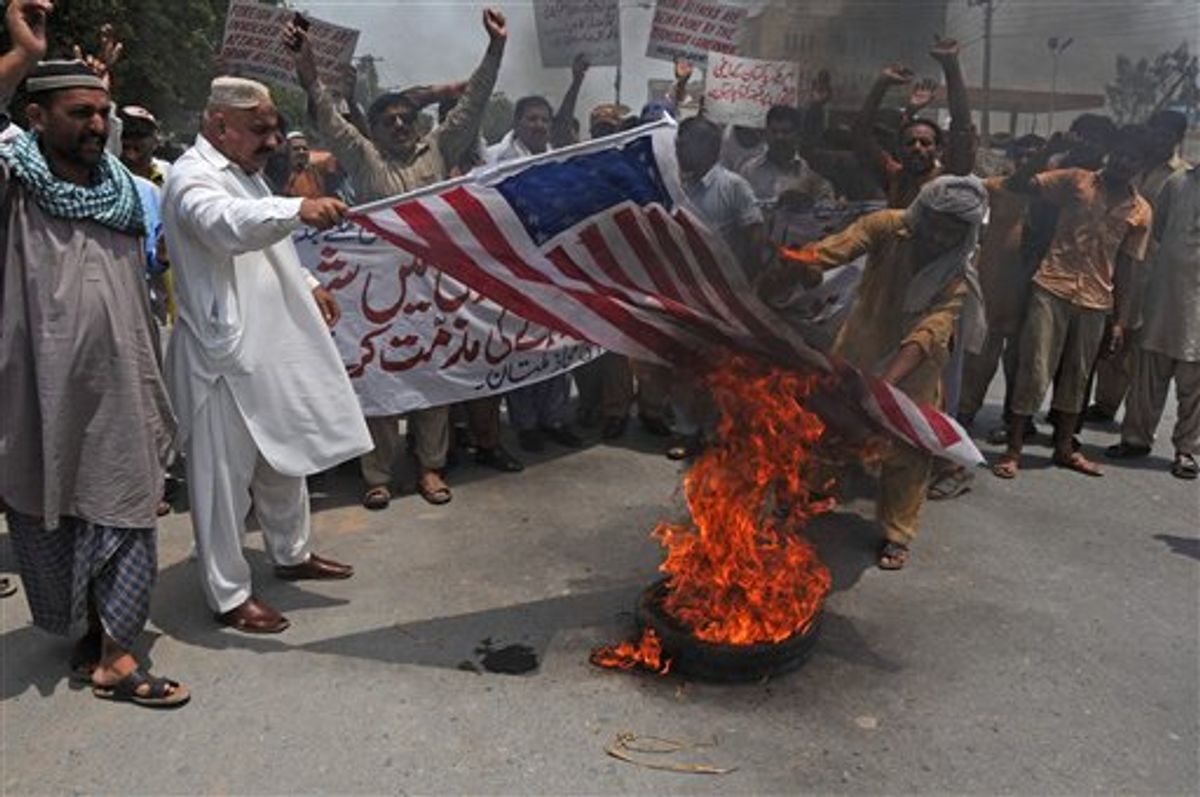 Pakistani protesters burn a representation of an American flag during a rally to condemn U. S. drone attacks targeting al-Qaida and Taliban militants' hideout in Pakistani tribal belt of Waziristan along the Afghanistan border, on Thursday, July 7, 2011 in Mutan, Pakistan. (AP Photo/Khalid Tanveer) (AP)
--

I've written numerous times over the last year about rapidly worsening perceptions of the U.S. in the Muslim world, including a Pew poll from April finding that Egyptians view the U.S. more unfavorably now than they did during the Bush presidency.  A new poll released today of six Arab nations -- Egypt, Lebanon, Jordan, Saudi Arabia, the United Arab Emirates and Morocco -- contains even worse news on this front:

The hope that the Arab world had not long ago put in the United States and President Obama has all but evaporated.

Two and a half years after Obama came to office, raising expectations for change among many in the Arab world, favorable ratings of the United States have plummeted in the Middle East, according to a new poll conducted by Zogby International for the Arab American Institute Foundation.

In most countries surveyed, favorable attitudes toward the United States dropped to levels lower than they were during the last year of the Bush administration . . . Pollsters began their work shortly after a major speech Obama gave on the Middle East . . . Fewer than 10 percent of respondents described themselves as having a favorable view of Obama.

What's striking is that none of these is among the growing list of countries we're occupying and bombing.  Indeed, several are considered among the more moderate and U.S.-friendly nations in that region, at least relatively speaking.  Yet even in this group of nations, anti-U.S. sentiment is at dangerously (even unprecedentedly) high levels.

In one sense, this is hardly surprising, given the escalating violence and bombing the U.S. is bringing to that region, its ongoing fealty to Israel, and the dead-ender support the American government gave to that region's besieged dictators.  Though unsurprising, it's still remarkable.  After all, one of the central promises of an Obama presidency was a re-making of America in the eyes of that part of the world, but the opposite is taking place.

More significantly, as democracy slowly but inexorably takes hold, consider the type of leaders that will be elected in light of this pervasive anti-American hostility.  When the U.S. propped up dictators to suppress those populations, public opinion was irrelevant; now that that scheme is collapsing, public opinion will become far more consequential, and it does not bode well either for U.S. interests (as defined by the American government) or the U.S.'s ability to extract itself from its posture of Endless War in that region.  Given that it is anti-American sentiment that, more than anything else, fuels Terrorism (as the Pentagon itself has long acknowledged), we yet again find the obvious truth: the very policies justified in the name of combating Terrorism are the same ones that do the most to sustain and perpetuate it.

(1) I recorded a BloggingheadsTV session yesterday with Law Professor Ilya Somin, discussing the illegality of the war in Libya, the debt ceiling drama, and the Drug War.  That can be viewed on the recorder below (specific segments can be selected here):

(2) I was recently given a copy of a book of essays by the playwright and actor Wallace Shawn which I can't recommend highly enough (given to me, coincidentally, by Shawn himself).  The first half of the book examines multiple political topics, while the second half contains more personal reflections, but it all has an amazing thematic coherence.  It's short and easy to read, but incredibly thought-provoking and novel in its own subtle, idiosyncratic way.  It can be purchased from Amazon at a discounted price, or a more noble means of acquring it is directly from the independent publisher at a slightly increased price.  I don't often recommend books, but this one is definitely worth your time and attention.

(3) Col. Lawrence Wilkerson -- the former Chief of Staff to Colin Powell and one of the most vocal critics of Bush/Cheney Terrorism and foreign policy (who supported Obama in 2008) -- was on Keith Olbermann's program last night discussing Obama's foreign policy as well as the treatment of Bradley Manning; it's highly worth watching, as Wilkerson discusses why these actions have caused him to re-consider his support for the President:

In five out of the six countries surveyed, the U.S. was viewed less favorably than Turkey, China, France -- or Iran. Far from seeing the U.S. as a leader in the post-Arab Spring environment, the countries surveyed viewed "U.S. interference in the Arab world" as the greatest obstacle to peace and stability in the Middle East, second only to the continued Palestinian occupation. . . . President Obama's favorable ratings across the Arab world are 10% or less.

While Americans are continuously inculcated with the message that Iran is the greatest threat to that region, the people who actually live there view the U.S. in that light.  And as the above-referenced links to other polls demonstrate, that is a routine finding in surveys of Arab and Muslim opinion in that part of the world.

On a related note (related because the poll finds that "the U.S. role in establishing a no-fly zone over Libya receives a positive rating only in Saudi Arabia and Lebanon, but, as an issue, it is the lowest priority"), this new New York Times article -- detailing the atrocities committed by the Libyan rebels whom NATO is fighting to empower -- is extraordinary for two reasons.  First, that we're fighting to empower such barbaric factions obviously severely undercuts the humanitarian justifications offered for the war; as John Cole asks: "when do we start bombing to stop these war crimes?"

Second, as FAIR's Jim Naureckas pointed out, the "NYT says rebel abuses 'paled next to' Gadhafi's -- then details virtually identical war crimes."  To see how true that is, just marvel at these paragraphs, appearing one right after the next with no apparent editorial recognition of how contradictory they are:

Colonel Qaddafi’s soldiers have also been beaten at the point of capture, and some have been shot, including several prisoners in the besieged city of Misurata who were shot through the feet, either as a punishment or as a means to prevent escape.

Rebels have also been seen by journalists repeatedly firing makeshift rocket launchers indiscriminately into territory or towns held by the Qaddafi forces.

Such rebels actions, however, have paled next to the abuses of Colonel Qaddafi’s forces, which have fired on unarmed demonstrators and used artillery, rocket batteries and mortars against many rebel-held cities and towns.

The only thing more reliable than deaths and taxes is that the NYT will take the side of the U.S. Government in how it "reports" on any foreign conflict.  And is there anything more predictable than the fact that the faction backed by the U.S. in a civil war turns out to be guilty of many of the same atrocities that "justified" the commencement of the war in the first place?  Bask in the glow of humanitarianism.