What if Bachmann's "moment" actually lasts?

She's leading in Iowa, surging in national polls, and handling the spotlight with more polish than anyone expected 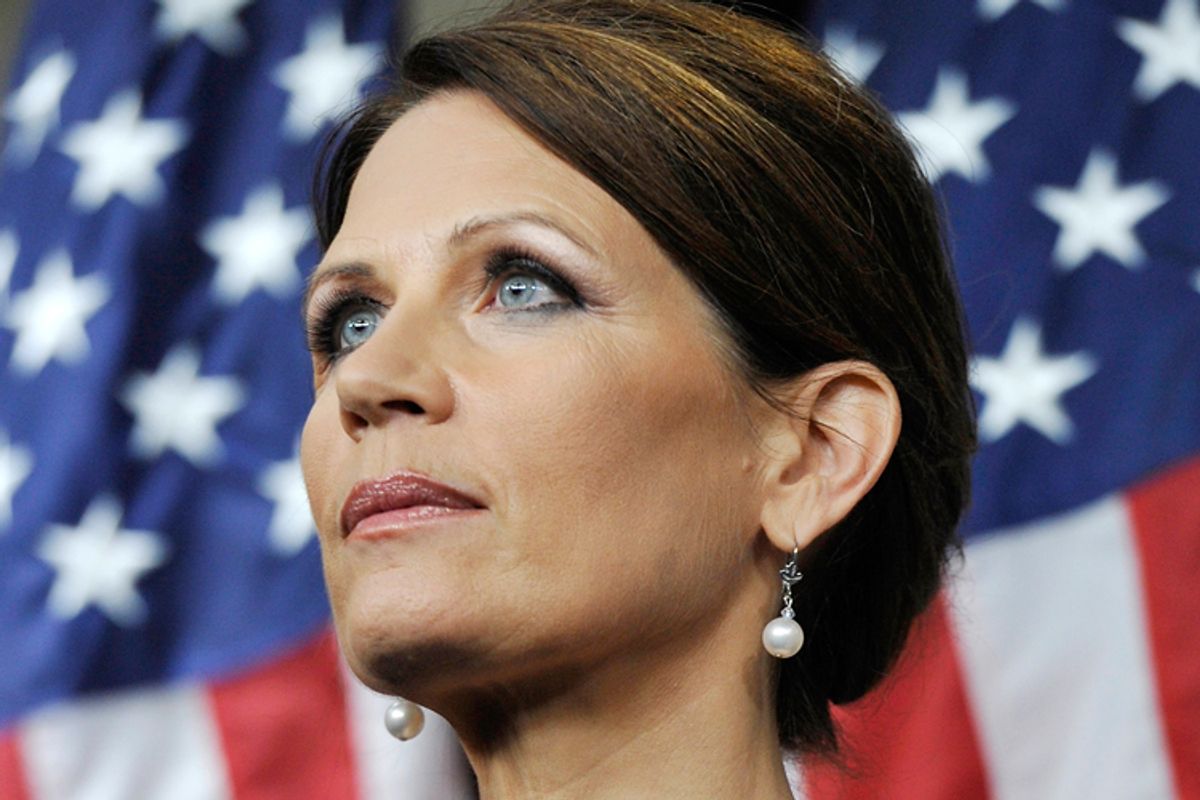 Michele Bachmann is now running in second place nationally among Republican presidential candidates, according to a new Quinnipiac University poll released Wednesday. And she's moved into the lead in Iowa and is second to Mitt Romney in New Hampshire (possibly by a close margin, possibly not). At least for now, there is no sign of her momentum slowing.

It's possible to interpret Bachmann's surge as a fleeting early-summer phenomenon. The explosion on her poll numbers and media visibility can be traced to her breakout performance at the first major GOP debate, just over a month ago. Whatever you think of the substance of her comments that night, Bachmann showed far more poise and polish than many had been expecting, and the positive reviews helped generate enthusiasm among a Republican base that has been yearning for someone, anyone, to get excited about.

This could easily be temporary. Herman Cain experienced a similar, if less dramatic, surge after a strong showing in a (Romney-less) debate earlier this year, but he's on his way back to obscurity after his moment gave way to Bachmann's. And Bachmann's moment, one theory holds, will soon give way to that of another candidate: Rick Perry, who has been teasing Republicans for weeks and may soon jump in the race. The new Quinnipiac survey shows Perry with 10 percent, just 4 points behind Bachmann. If he does get in, Perry has the potential to stir the base's passions while also -- thanks to his long run as the governor of the nation's second-largest state -- winning approval from the party's elites. That combination could send his poll numbers north and Bachmann's south.

Of course, it's also possible that Perry will be a dud -- 2012's answer to Fred Thompson and Wesley Clark, late-starting entrants whose candidacies failed to live up to the hype that preceded them. And it's possible that Bachmann's surge will be more than momentary. Is anyone in the current field better at connecting with true believers on the right than her?

This is why a recent piece from Politico's Jonathan Martin is so interesting. Martin likens Bachmann's rise to that of Howard Dean in the run-up to the 2004 primaries, and it makes a certain amount of sense. As Martin notes, Bachmann is fueled by "the base’s unalloyed contempt for a president they consider illegitimate," just as Dean was. Dean, the former governor of a state smaller than Essex County, N.J., began the '04 race in utter obscurity, but the base's magnetic attraction to him and his message quickly filled his campaign coffers and pushed him near the top of national and key early state polling. Even as he surged, though, the political and media establishments considered him a weak general-election candidate, someone whose presence on the ballot would cost his party support that it would otherwise receive. The same is now said about Bachmann.

I have long been arguing that this makes it essentially impossible for her to win the GOP nomination -- that even if she were to score a win in Iowa next year, the party's elites would take aim at her and quickly close ranks behind her most viable remaining opponent. Certainly, there is a precedent for this -- it's how Republican elites responded when Pat Buchanan won New Hampshire over Bob Dole.

But the Dean example may be worth keeping in mind here. Yes, it's true that he ended up falling flat on his face when the primaries and caucuses began and that his collapse was encouraged by establishment players who feared the consequences of nominating him. But there was also a moment just before all of that, in late 2003, when Dean's grass-roots-fueled surge translated into endorsements from some party elites that would have been unthinkable even months earlier. Everyone remembers when Al Gore climbed aboard, but he wasn't alone. By Christmas 2003, the overwhelming consensus -- even among Democrats who didn't want him -- was that Dean would be George W. Bush's opponent in 2004.

What Dean's example showed is that it is possible for an insurgent candidate deemed unelectable by the establishment to build and sustain enough support from the party base to compel otherwise reluctant members of the establishment to climb aboard. If Bachmann continues to improve her position in the polls -- and if she can then sustain that support -- she could be in position to force a similar reckoning among GOP elites.

Or, you know, maybe sometime between now and then she'll let down her guard and say something that makes it easy for them to marginalize her for good.