As consensus mounts, and their states confront torrid heat, these politicians maintain global warming is a hoax 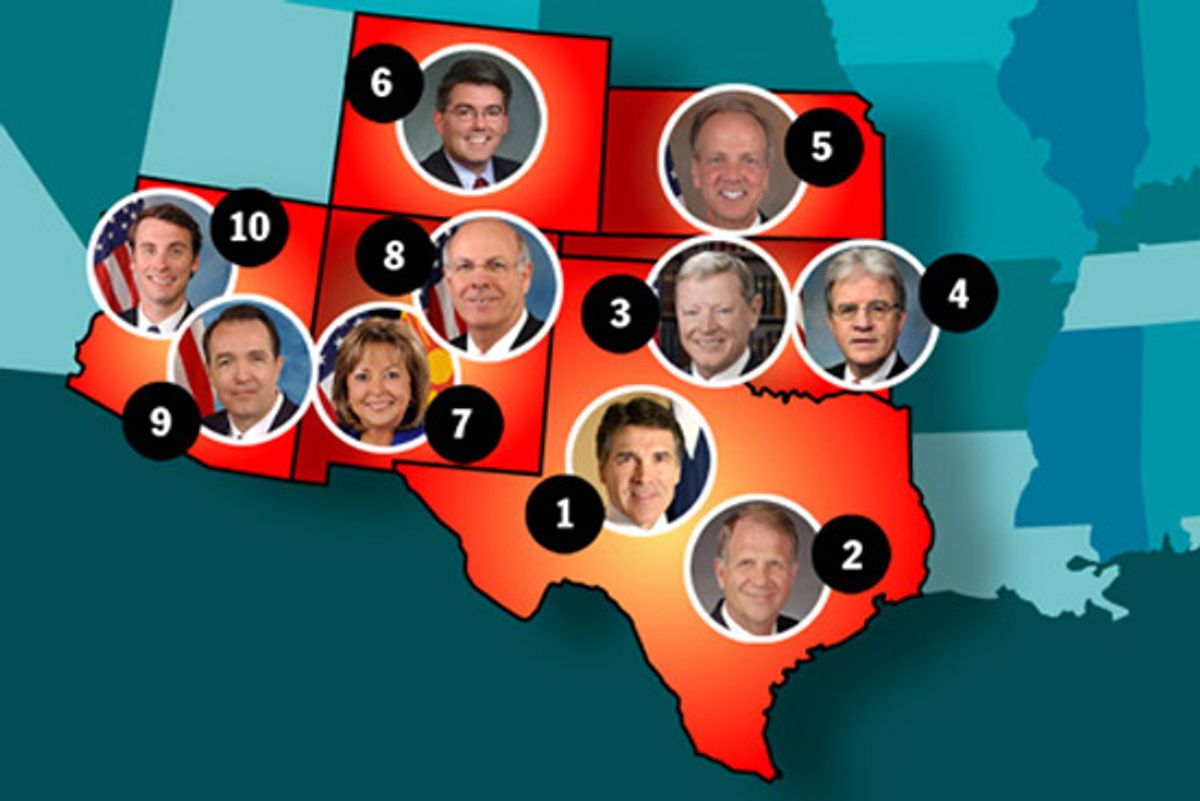 Much of the southern U.S. is currently suffering through one of the most severe dry spells of the past century. It's impossible to say with certainty that this particular drought -- caused by a lingering La Niña event in the Pacific -- is a direct result of global warming. But, as we noted yesterday, scientific consensus is overwhelming that shifting weather patterns drastically increase the probability of devastating droughts from Texas on west. Yet, in spite of this, many GOP politicians from some of the worst afflicted Southwestern states maintain that man-made global warming is an elaborate hoax. We've compiled a list of 10 such prominent climate change deniers and compare their statements against their constituents' current climate woes. (In the above map, areas shaded in red are considered to suffer from droughts, the darker colors corresponding to more serious conditions.)

1. What Gov. Rick Perry believes: In his 2010 manifesto, "Fed Up! Our Fight to Save America From Washington," Perry called man-made climate change "all one contrived phony mess that is falling apart under its own weight." Then, in April, he issued a proclamation asking Texans to literally pray for an end to the drought, notes Rolling Stone.

2. What Rep. Ted Poe believes: In a 2009 statement on the floor of the House, Poe pointed to that year's Climategate controversy as reason to doubt climate science. (Note: An independent panel has since exonerated the scientists involved in the "scandal.") He also pointed to scientists who, in 1974, argued that Earth might be cooling, as evidence that scientists have no earthly idea what they are talking about, now or then. "We are going to try to trust the world's climate predictions to a group of people from the 1970s and now, 2000, to a group of people who can't even predict correctly tomorrow's weather," he said.

How Mother Nature has responded: Texas has arguably been the state hardest hit by the current drought. Of the state's 254 counties, 213 have been declared disaster areas. The Texas Tribune says the situation qualifies as a "significant natural disaster." The months from October to June have been drier than in any comparable stretch in the state's history.

3. What Sen. James Inhofe believes: Both time and space restrictions prevent us from printing all the dubious statements Inhofe has issued about global warming. He is, by all accounts, the standard bearer for climate change denial in the Senate. Between his suggestion that the EPA is a "Gestapo bureaucracy" in 2004, and his insistence that climate change projections are "the second-largest hoax ever played on the American people, after the separation of church and state," you get the basic gist of his position on the subject.

4. What Sen. Tom Coburn believes: At a town hall meeting in 2009, Coburn -- perhaps alluding to his earlier career as an obstetrician -- told audiences that, "I am not the smartest man in the world, but I have been trained to read scientific documents, and [man-made global warming] is malarkey."

How Mother Nature has responded: Average rainfall across Oklahoma is down 12 inches since last fall, marking the second-driest October-to-June stretch in the state's history. Temperatures have topped 100 degrees in at least one portion of the state on 54 separate days this year. Poor wheat yields and a dearth of freshwater have forced many ranchers to sell off their livestock, which they find themselves unable to sustain.

5. What Sen. Jerry Moran believes: Last year, when Moran was a member of the House of Representatives, he cosponsored a "resolution of disapproval" that would ignore the EPA's finding about the harmful impact of greenhouse-gas pollution and prevent the agency from using the Clean Air Act to regulate emissions.

How Mother Nature has responded: "Drought emergencies" have been declared throughout half of Kansas, and some portions of the state are suffering through half-normal rainfall averages. As in Oklahoma, ranchers across the state have been forced to sell off cattle for an inability to feed them.

6. What Rep. Cory Gardner believes: The freshman congressman has said that he thinks the world is warming, but that he doesn't "believe humans are causing that change to the extent that's been in the news." He has argued forcefully that any attempts to legislate climate change "will devastate the economy" and kill the economic recovery.

How Mother Nature has responded: The U.S. Department of Agriculture has designated 10 counties in southern Colorado as primary natural disaster areas since last month. Farmers have been especially hard hit by the drought. In Fremont county, for example, apple producers lost 60 percent of crop yields over a four-day stretch spanning the end of April to early June.

7. What Gov. Susana Martinez believes: As a candidate in 2010, Martinez mischaracterized consensus among scientists on the issue of climate change, saying "There is disagreement in the science community concerning the causes of global warming." She also told Politico that "I'm not sure the science completely supports" the notion that it is a man-made phenomenon.

8. What Rep. Steve Pearce believes: Pearce, who was ushered into Congress in last November's Republican landslide, has invoked Climategate as evidence that the science behind global warming is shaky. He asked, in particular, "If [the Intergovernmental Panel on Climate Change doesn't] believe it, why should the rest of [us] be penalized in our standard of living for something that can’t be validated?”

How Mother Nature has responded: New Mexico registered "by far the driest year going back to 1896," while temperatures were 1.3 degrees above average through 2011's first six months. John Fleck and the Albuquerque Journal reports that the resulting drought and wildfires -- including the current Las Conchas fire, which has seared through 148,000 acres of land -- marks a "new normal."

9. What Rep. Trent Franks believes: Franks has said, "While I am concerned about the potential effects of global warming, I have yet to see clear and convincing evidence that it exists beyond historical fluctuations." He's also pledged to oppose any federal bill that would increase revenue for the purpose of combating climate change.

10. What Rep. Ben Quayle believes: The newly elected congressman (and son of former VP Dan Quayle) has argued that the science on climate change is inconclusive and that history suggests global warming might be a natural phenomenon: "Our planet has warmed and cooled since the beginning of time," he said in an interview with the Arizona Republic last year.

How Mother Nature has responded: Tucson suffered an 81-day stretch, from April 9 to June 30, without a drop of rain, the fourth-longest such period on record. And much of the state has been pummeled by wildfires, including one in the Apache-Sitgreaves National Forests that burned through more than 500,000 acres in the state earlier this month. Toward the end of June, three such blazes occurred simultaneously.