The senator tells talk radio that ruining the economy will be bad for the GOP brand. He's right! 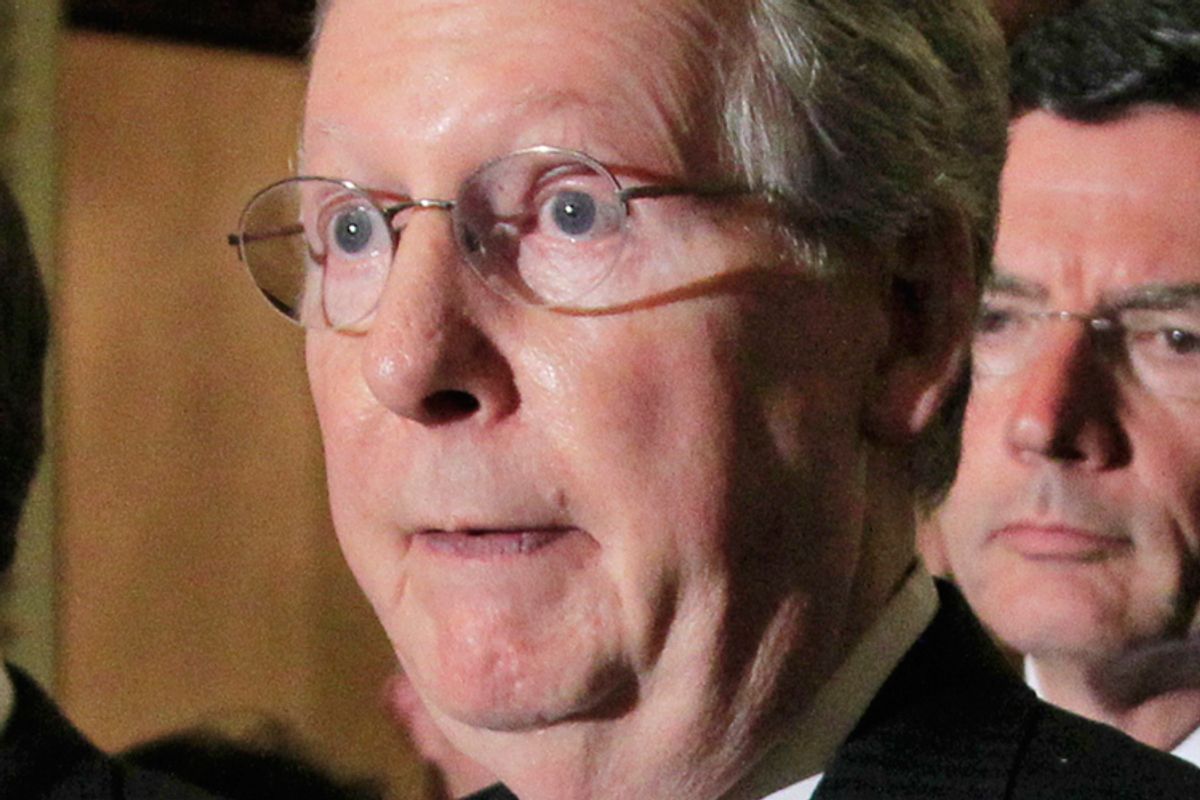 If someone had told me at the beginning of this week that I would be writing almost nonstop about the antics of Senate Minority Leader Mitch McConnell, I probably would have slit my wrists right then and there. It is my belief that his tenure as a Senate power broker will be remembered by future generations as marking the nadir of effective U.S. government. (Or at least I hope so, because if it gets any worse than this, we are truly doomed.) But his sudden transformation into desperate truth teller this week has been riveting. McConnell appears genuinely terrified that a failure to raise the debt limit will be a disaster for the Republican Party. So despite the outpouring of conservative rage that has greeted his complete capitulation in the negotiations for a new budget deal, he's doubling down on his scheme to give Obama practically unilateral power to raise the ceiling.

McConnell used a radio interview to defend his proposal to allow a three-stage increase and predicted that Republicans would be punished if they did not allow the debt ceiling to be raised.

Recounting how the 1995 government shutdown helped President Bill Clinton win re-election the next year, Mr. McConnell said any impasse that hurt the nation's credit and led to government checks being delayed could have the same result for President Obama.

"He will say Republicans are making the economy worse ... It is an argument that he could have a good chance of winning and all of the sudden we have co-ownership of the economy. That is a very bad position going into the election."

Not only would Obama say it, but it would also be true, a fact that received solid confirmation a few hours after the interview when Moody's Investment Service placed the credit rating of the United States "on review for possible downgrade." The reason? "The rising possibility that the statutory debt limit will not be raised on a timely basis, leading to a default on US Treasury debt obligations."

Credit downgrades and economic meltdowns are the kind of things that, to borrow another one of McConnell's comments to Ingraham, pose a strong threat of destroying the "brand" of the political party held responsible for them. McConnell, who wants more than anything else to be the Senate Majority Leader under a Republican president during the next Congress, is seriously worried that House Republican Tea Party is recklessly endangering his dreams.

And he is absolutely, 100 percent correct in this assessment.