Time to end the perp walk?

DSK is only the latest in a long, colorful line of suspects paraded in front of the media before their day in court 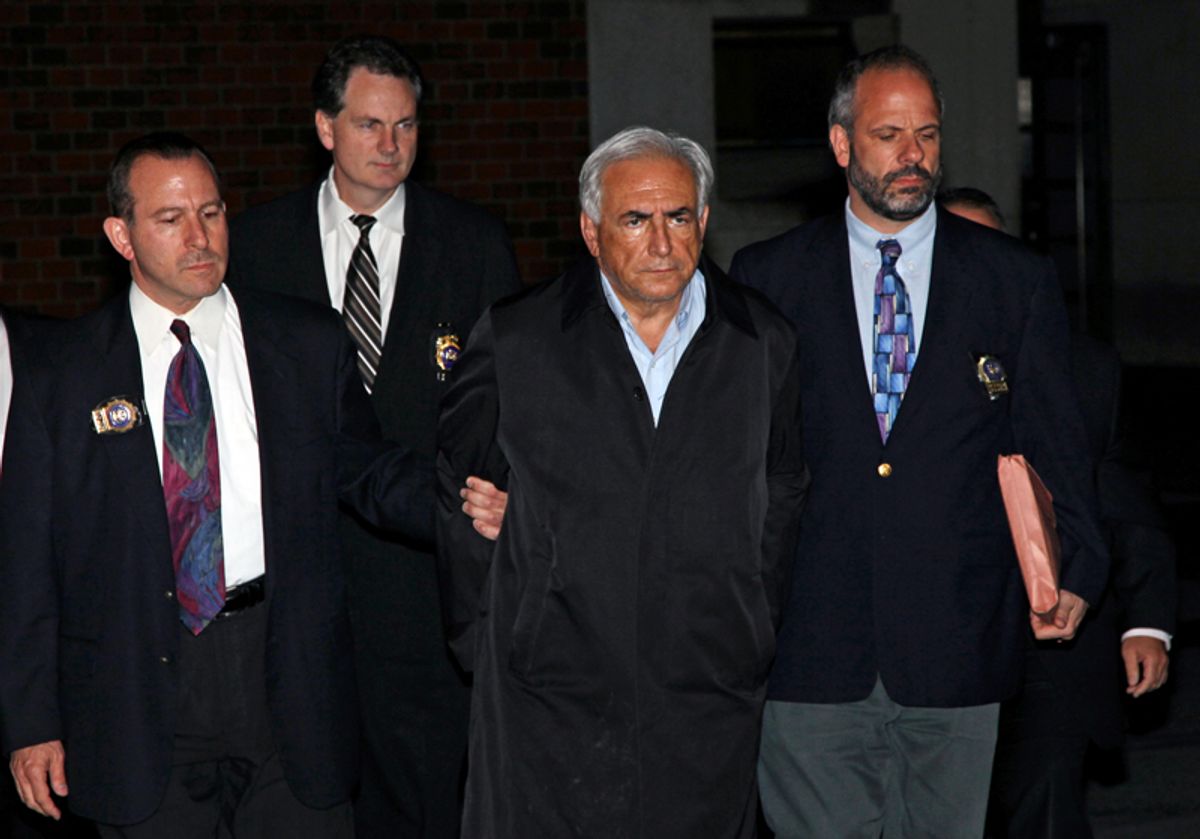 FILE - In this May 15, 2011 file photo, Dominique Strauss-Kahn, head of the International Monetary Fund, is lead from a police station in New York where he was being held. While American authorities have condoned, or at least tolerated, such âperp walksâ for more than a century, in France itâs been illegal to show images of suspects in handcuffs since 2000. French politicians and citizens alike are upset by the images, which they say make Strauss-Kahn, accused of sexual abuse, appear guilty. (AP Photo/Craig Ruttle, File) (Craig Ruttle)
--

New York perp walks date to 80 years ago, when Weegee -- the legendary tabloid photographer -- and his peers shot their quarry with boxy Speed Graphic cameras and blinding flashbulbs.

Most accused criminals facing a perp walk in New York have trudged gloomily to their turn with the modern equivalent of 30 seconds in the public stocks. On the other hand, mobster John Gotti managed to transform his march of shame into a perp strut.

Strauss-Kahn seemed more angry than abashed during his walk.

And now that the allegations against the Frenchman have been called into question, sharp criticism of pillorying at the hands of the media has led some to conclude that the old police-media tradition of orchestrated perp walks has run its course.

The National Association of Criminal Defense Lawyers says perp walks invite bias against their clients. A Brooklyn city councilman, David Greenfield, has proposed a local law that would ban them.

"Even Mother Teresa dragged out by detectives would look guilty," he says.

Faced with criticism from France, where perp-walk photos are taboo, New York Mayor Michael Bloomberg crowed, "If you don’t want to do the perp walk, don’t do the crime."

But the mayor changed his tune last week when the case against Strauss-Kahn teetered, calling his perp walk "outrageous" and a "circus."

A sampling of crime reporters from across the country indicated that few of the nation’s police agencies now coordinate perp walks with the media..

Most that do are clustered around New York City and in Florida. A number of federal agencies also continue to use perp walks -- a link to FBI director J. Edgar Hoover, who understood the priceless P.R. value of an image of a cuffed bad guy in the grasp of G-men.

In most cities, perp walks are seen as redundant because mug shots are now quickly distributed to the media. Police often make it difficult for photographers by moving suspects through secure facilities closed to the public and the press.

Even in places where suspects are moved in public, photographers must often stake out a location and hope for the best because the media are not tipped off to the time an accused perpetrator is to be transported.

The NYPD says its policy is to neither impede nor promote photographs of suspects. But by long-standing tradition, New York police notify the media an hour or so before a suspect is to be moved out of a precinct station house for a trip to a borough's central booking facility.

"We have been walking prisoners out of the front doors of station houses for 150 years," New York police commissioner Raymond Kelly told reporters last week. "This is how we transport people to court … I don't think the genie's ever going to be put back inside the bottle. That's the way it is."

Variations on the perp walk in New York date to the 1830s, when the city’s earliest crime scribes sat outside Police Court in Manhattan and ogled the procession of drunks and cons who were escorted before a judge.

In the early 1900s, it became a popular press recreation to observe accused criminals crossing the so-called Bridge of Sighs between the Tombs and the Criminal Courts Building in lower Manhattan.

But precinct perp walks as we know them today proliferated beginning about 1930, when technological advances in photography ushered in the golden age of photojournalism.

Michael Lipack, who retired recently as a photo editor for the New York Daily News, told me that perp walks were a "way of life" in New York during his 40 years as a photographer.

"That’s how I made my living at the beginning of my career, going from one precinct to the next to shoot perp walks," he said. "Perp walks were not a big deal then. If you were arrested, you knew you had to face the piper coming out."

But Lipack said that even he was surprised by the size of the media scrum at the Strauss-Kahn perp walk, which attracted international attention.

He said it now seems inevitable that the criticism will prompt the NYPD to cut back on orchestrated perp walks.

"They’ll be walking them out back doors unless it’s someone the cops really want you to see, if it makes the cops look good," Lipack said. "It’s gonna be a new ballgame. The press card doesn’t carry much juice anymore."

For what it’s worth, Lipack and other journalists make the case that perp walks can be beneficial to crime suspects, who can disappear forever down criminal justice rabbit holes in other countries.

As the Chicago Sun-Times said of perp walks in a recent editorial, "The alternative is far worse: a society where government secrets are sanctioned. Suspects are hidden away, courtrooms are closed and, far too often, anything goes.

"The perp walk protects the public and, ironically enough, the suspect."

The Strauss-Kahn mash-up may spell the beginning of their end, but perp walks have survived horrible gaffes in the past.

In 1984, an accused child molester named Jeffrey Doucet was shot and killed during a perp walk through the Baton Rouge, La., airport. The assembled media, which had been alerted to Doucet’s return after his arrest in California, witnessed the killing when the father of the victim -- wearing a disguise -- stepped from a bank of phones and shot Doucet in the head.

Some perp walks have had blatant ulterior motives.

In the 1980s, the publicity-loving Rudolph Giuliani, who was then working as a U.S. attorney in New York, encouraged a broad use of perp walks in federal cases. In mob conspiracies, the arrestees were chained together, a searing graphic of the alleged collusion -- to the dismay of defense attorneys.

Giuliani also helped pioneer the use of perp walks for white-collar criminals, who were accustomed to more genteel treatment.

In 1987, Richard Wigton, an executive at Wall Street’s Kidder, Peabody, was frog-marched out of his 18th-floor office in handcuffs for alleged insider trading. He was in tears as he faced a media phalanx outside.

Giuliani called the arrest "a lesson to people who want to be millionaires in their 30s."

After nearly three years of twisting in the wind, Wigton was cleared when the investigation was trash-canned. But Wigton was ruined. Near the end of his life, in 2006, he described himself as "a victim of Giuliani’s ambition."

More recently, a bizarre perp walk in Arizona smelled of politics. Joe Arpaio, the free-wheeling Maricopa County sheriff, has had a running feud with the county board. In 2009, he arrested Supervisor Don Stapley, an old foe, and subjected him to a humiliating perp walk.

"You’ve got to be kidding," Stapley said.

Arpaio was not kidding, but his thin allegations against Stapley were soon thrown out by a judge.

In 1994, William Bratton, then New York’s police commissioner, ordered a perp walk for a group of Harlem cops accused of corruption. They were paraded in their uniforms, and Bratton later dramatically threw their badges in a trash can.

In 1995, Manhattan doorman John Lauro Jr. was arrested after he was caught on a security camera pawing through the underwear drawer and closets of a tenant in his building. WNYW, the Fox television affiliate in New York, asked for a perp walk, so detectives led Lauro from the station house and drove him around the block.

He sued, claiming violation of his Fourth Amendment rights. A lower court agreed that police had staged a perp walk that was "an inherently fictional dramatization" with "no legitimate law enforcement justification." Lauro won no damages because an appeals court ruled that police in this case were protected by "qualified immunity."

But since then, New York police have limited perp walks to instances where suspects are being moved for a legitimate purpose.

Also in 1995, Timothy McVeigh, who was later executed for his role in the Oklahoma City federal building bombing, was subjected to a perp walk nearly three hours before he was officially arrested so the FBI could maximize its network television news exposure, according to the suspect’s attorneys.

That walk also was noteworthy because a dozen federal agents were crammed in beside the suspect, rewarded with TV time for their big collar.

Finally, the most famous story about a perp walk is a myth that will not die.

In the 1940s, bank robber Willie Sutton became a folk hero in New York after he escaped from prison. His arrest in 1952 was front-page news for the Big Apple’s tabloids. This exchange supposedly took place at his Brooklyn perp walk:

Reporter: "Willie, why do you rob banks?"

Sutton: "Because that's where the money is."

But the quote was made up -- a pipe job, as New York scribes used to say.

"I never said it," Sutton revealed in his memoir, written with the respected biographer Ed Linn. "The credit belongs to some enterprising reporter."

But he admitted that he wished he had said it. And he adapted the phrase for the title of his biography: "Where the Money Was."

David J. Krajicek, a veteran police reporter and true crime author, is a contributing editor of the Crime Report. His most recent book is "Murder, American Style: 50 Unforgettable True Stories About Love Gone Wrong." He welcomes comments from readers.