Why Mitch McConnell will win the day 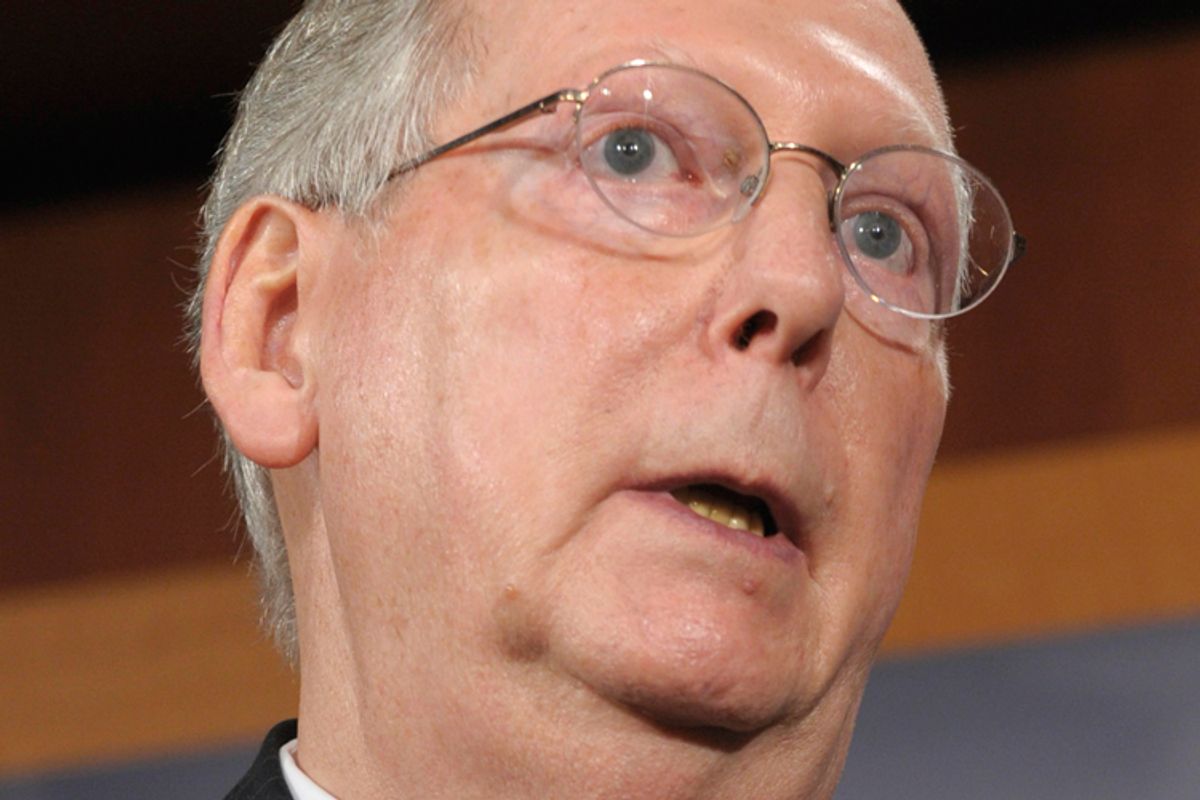 This was originally published on Robert Reich's blog

Senate Minority Leader Mitch McConnell's compromise on the debt ceiling is a win for the president disguised as a win for Republicans. But it really just kicks the can down the road past the 2012 election -- which is what almost every sane politician in Washington wants to happen in any event.

McConnell's plan would allow the president to raise the debt limit. Congressional Republicans could then vote against the action with resolutions of disapproval. But these resolutions would surely be vetoed by the president. And such a veto, like all other vetoes, could be overridden only by two-thirds majorities in both the House and Senate -- which couldn't possibly happen with the Democrats in the majority in the Senate and having enough votes in the House to block an override.

Get it? The compromise allows Republicans to vote against raising the debt limit without bearing the horrendous consequences of a government default.

McConnell, like most other Republican leaders, has all along seen the battle over raising the debt ceiling as part of a master plan to unseat Obama. Remember, it was McConnell who openly admitted the GOP's "top goal is to defeat President Obama in 2012" -- a brazen and bizarre statement in the face of the worst economic crisis in 70 years.

The GOP will weave Obama's decision to raise the debt ceiling into the 2012 presidential campaign -- as well as Senate and House races -- so 2012 becomes what they hope will be a referendum on Obama's "big government."

McConnell's compromise will win the day. Expect much grousing from the GOP, especially those who feel they need to posture for the Tea Party. But the compromise -- or something very similar -- is the only way out. Obama can't agree to a budget plan lacking tax increases, especially on the wealthy. Republicans can't agree to one including them. In Washington, when an immovable object meets an irresistible force, something's got to give. A compromise that allows both sides to save face is the easiest give of all.

Moreover, as the Aug. 2 deadline approaches, big business and Wall Street (who hold the purse strings for the GOP) are sending Republicans a clear signal: Raise the debt ceiling or capital markets will start getting nervous. And if they get nervous and interest rates start to rise, you guys will be blamed.

Washington insiders will consider the McConnell compromise a win for Obama. But the rest of the country hasn't been paying much attention and won't consider it much of a win for either side. Their attention is riveted to the economy, particularly jobs and wages. If those don't improve, Obama will be a one-term president regardless of how the GOP wants to paint him.