The Committee to Reelect Barack Obama?

The GOP field is so fractured and extremist it helps the president. For now, anyway 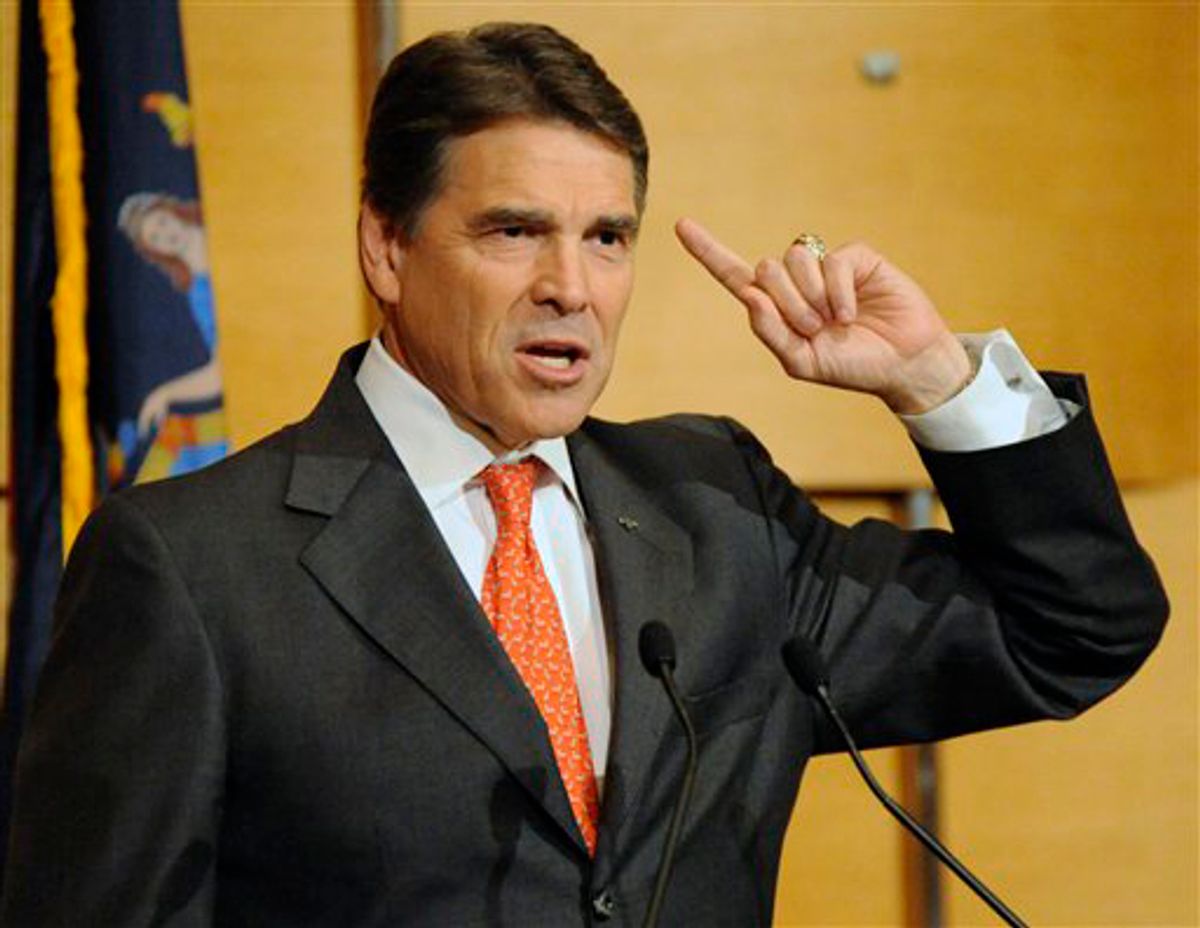 Texas Gov. Rick Perry speaks at the Lincoln Dinner, an annual fundraising event for the New York GOP, Tuesday, June 14, 2011 in New York. Perry stirred speculation Tuesday that he would seek the 2012 Republican presidential nomination, championing his state's economy before a packed GOP gathering in New York and telling a television interviewer he would engage in a "thought process" before deciding whether to join the field. (AP Photo/Bill Kostroun) (Bill Kostroun)
--

The trends we saw in GOP presidential polls a few weeks ago continue. Mitt Romney remains the front-runner, but Michele Bachmann continues to gain support and hold second place nationally (and she's currently beating Romney in Iowa). The most interesting thing about this latest Quinnapiac poll is that undeclared right-wingers like Sarah Palin and Texas Gov. Rick Perry are running right behind Bachmann, while also-rans including Tim Pawlenty, Newt Gingrich, Jon Huntsman and Rick Santorum remain in low single digits (Ron Paul hangs on to his 5 percent). That Romney is creaming Huntsman right now even in his home state of Utah would seem to suggest that the man the Beltway loves is never going to catch fire with the GOP base.

But it's also possible they won't coalesce. Bachmann has made a surprising surge, but I think these numbers are actually bad for Bachmann. It shows there's a fairly broad base for an extremist candidate, but at 14 percent, she's supported by roughly 30 percent of that base. If other Tea Party favorites look at those numbers and jump in, Bachmann's in trouble.

I still doubt Palin will run; she's having too much fun being an unaccountable wealthy celebrity. That bus tour thing was hard. But she's also a narcissist, and she might look at those numbers and say, "Why not?" Rick Perry is even more likely to say, "Why not?" In fact, the latest buzz is that Perry is making calls to GOP leaders and donors to test the waters, and getting encouragement. On "Hardball" with me Wednesday Politico's Jonathan Martin said he's hearing from GOP insiders that Perry's in, although Perry's people downplay the idea. Martin also floated the notion that Perry might not merely be the Tea Party candidate; he might be the electable guy the party needs, the hybrid of the Tea Party and the "establishment" GOP elders dream of.

Dream on. It's true Perry has a 10-year record as Texas governor (with time as lieutenant governor before that), which makes him a "serious" candidate. But that record is distinguished by his courting the far right with talk of secession, ostentatious prayer breakfasts, and coziness with Texas Confederate stalwarts. Justin Elliott revealed Perry's popularity with groups trying to preserve the memory of Texas's allegiance with the Confederacy. The neo-Confederate, still-secessionist League of the South endorsed Perry in his 1998 race for lieutenant governor, praising him as a member of the Sons of Confederate Veterans, a group that's regularly torn apart by infighting between those who want to honor their heritage and those who want to return to the days of white supremacy. We couldn't confirm Perry was ever a member of the group, but without openly embracing them he's regularly validated their quest for redemption. Perry has honored leaders of the Sons of Confederate Veterans at ceremonies in Austin, and he's resisted efforts to remove Confederate symbols from state buildings. "Although this is an emotional issue," he wrote, "I want you to know that I oppose efforts to remove Confederate monuments, plaques, and memorials from public property. I also believe that communities should decide whether statues or other memorials are appropriate for their community." Perry regularly enjoys adoring profiles in Confederate magazines.

Just to offer more evidence of Perry's Confederate bona fides, I should note that Martin reports that the Texas governor would inherit the remnants of Haley Barbour's crack political team, should he run, including Haley's nephew Henry, who says “Perry is the most natural fit for us." Barbour, you'll recall, decided not to run after his attempts to whitewash Mississippi racism as not being "that bad" didn't seem to play to a national audience.

I just don't see Perry's hybrid appeal. He told the very first Texas Tea Party, in April 2009: "I'm just not real sure you're a bunch of right-wing extremists. But if you are, we're with you." That would mean he's standing with…a bunch of right-wing extremists. Not terribly hybrid-y. And when folks in the adoring crowd screamed "Secede!" Perry didn't talk them down. Later he told reporters: "We've got a great union. There's absolutely no reason to dissolve it. But if Washington continues to thumb their nose at the American people, you know, who knows what might come out of that. But Texas is a very unique place, and we're a pretty independent lot to boot." He refused to back away from his friendly comments about secession.

I don't think there exists such an animal as a Tea Party/GOP establishment hybrid, frankly. I don't believe in unicorns, either. Karl Rove tried to find them, lurching between an honest dismissal of candidates like Delaware's Tea Party senate candidate, Christine "I am not a witch" O'Donnell, and then trying to embrace them. But I understand why Republicans dream of such a creature.

Mitch McConnell's debt ceiling capitulation represents his admission the GOP can't govern, given the extremist wing elected in 2010. He and John Boehner know they have to stop the nonsense and raise the debt ceiling, or risk the wrath of their corporate masters – but they can't. I think the McConnell offer is probably the best way out of the mess, but his attempt at realpolitik is still probably idealistic dreaming: I don't know how House Republicans would go for it.

If Perry runs, he'll be courting those same extremists, the same folks Bachmann appeals to, and even if pragmatists decide to hitch their wagon to Perry, they won't find many independents and swing voters who'll see him as a pragmatist or moderate: They'll see him as Michele Bachmann in cowboy boots, with a little more government seasoning. If GOP kingmakers get behind him, and he beats both Bachmann and Romney, he'll still lose in November, maybe a little less badly than Bachmann would. But he'll scare independents and swing voters nonetheless. I've said it before: I think the only GOP candidate in the race with a chance to beat Obama is Mitt Romney, a man I once labeled Ron Burgundy, a guy with more flexibility than Gumby. He's also a guy who could present himself as a private sector leader as well as a public sector pragmatist – that whole Obamneycare program he passed up in Massachusetts would be a campaign pillar, not something to hide from, in another era. I don't think Romney can devolve back to his pragmatist self, so I think Obama's got a strong chance of being re-elected even with the economic mess that he's done far too little to solve.

But it would be a mistake to see that extremist Tea Party vote being ready to pragmatically coalesce around one standard-bearer to avoid a primary season bloodbath. If they were pragmatists, they wouldn't be Tea Partiers. So far the 2012 GOP field is looking like the Committee to Re-Elect Barack Obama (CREEBO sounds better than CREEP, no?)

I discussed all of this with Jonathan Martin and Chris Matthews on "Hardball" Wednesday: