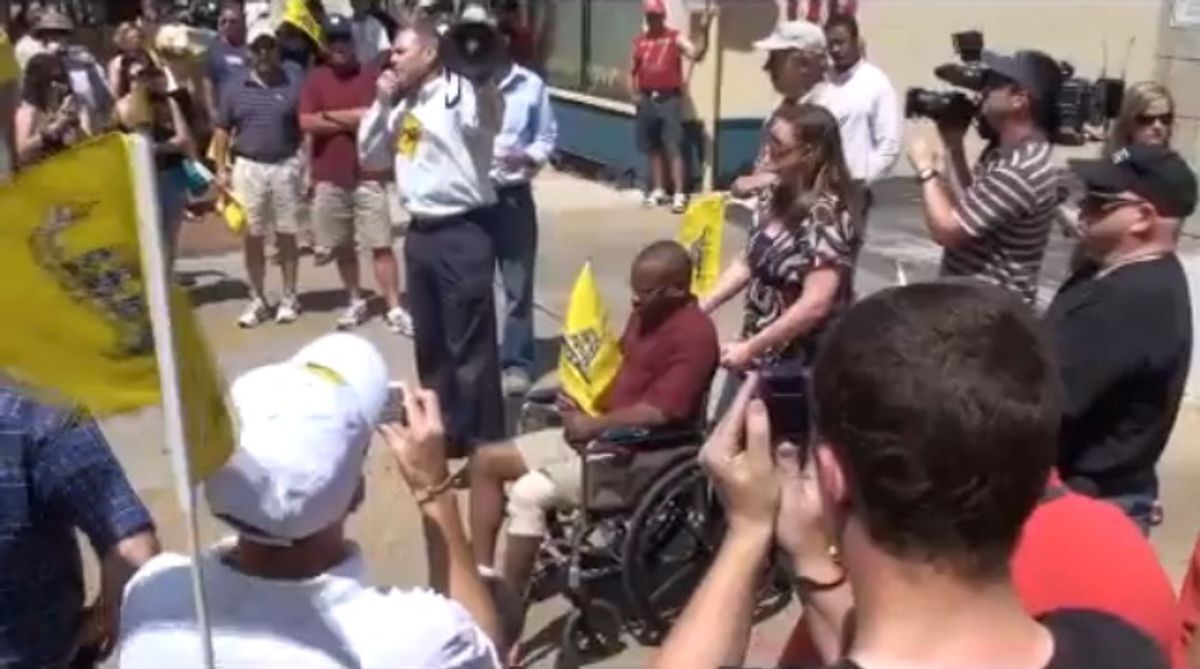 Kenneth Gladney at a 2009 anti-SEIU protest. In his testimony this week he admitted that he was in the wheelchair because it was hot and "they didn't have folding chairs."
--

Remember the story of Kenneth Gladney? You probably don't, unless you're a right-winger. He was a guy who got knocked over for a second during a contentious town hall meeting in St. Louis in 2009. He quickly became a folk hero to right-wing bloggers, because he was, if you squinted, a black conservative victim of Union Thug Violence.

He was also uninsured -- yep! -- and the hospital visit he had to make in order to demonstrate the severity of his "beating" also made him a right-wing charity case. He then began appearing at Tea Party rallies and on Fox News in a wheelchair, etc., etc. Liberals laughed bitterly at the "uninsured person protests government-funded healthcare" story and then forgot all about Gladney, forever. But the conservative bloggers never forget an exaggerated or wholly invented tale of victimhood.

Now, two years later, there is closure: The two SEIU thugs who viciously beat Gladney went on trial (for misdemeanor assault) on Monday. The trial wrapped up on Tuesday. The jury deliberated for 40 minutes and then found both of the accused not guilty. (CASEY ANTHONY ALL OVER AGAIN!) Gladney's own ridiculous testimony basically exposed how much of an overblown farce this entire incident was from the beginning.

(Gladney wore a neck brace during the trial. The neck brace was unrelated to the two-year-old incident. You know that whole thing about frivolous lawsuits and tort reform and the culture of victimhood and ambulance-chasing trial lawyers? Yes, well, the conservative movement totally means all of that, until someone in an SEIU shirt briefly knocks someone over.)

This is where it gets really good: TBogg found BigJournalism.com's explanation for how this travesty of justice was allowed to occur. Because of Media Matters! See, SEIU paid Media Matters some money, and then, mysteriously, Kenneth Gladney lost his case.

This conspiracy, like so many others, goes all the way to the top.

When you look at the timeline of events and the media calendar in general leading up to the Gladney incident last August, it’s difficult not to conclude that there was collaboration amongst White House staff, components of Big Labor, and certain liberal media outlets. However, we know that all will continue to deny it.

Apparently SEIU and Media Matters for America and George Soros and the Tides Foundation and Eric Boehlert and the city of Montclair, N.J., acting on orders from the White House, all used their wizard powers to convince a jury in St. Louis that Kennedy Gladney was not actually assaulted. And that is how the vast left-wing conspiracy works.