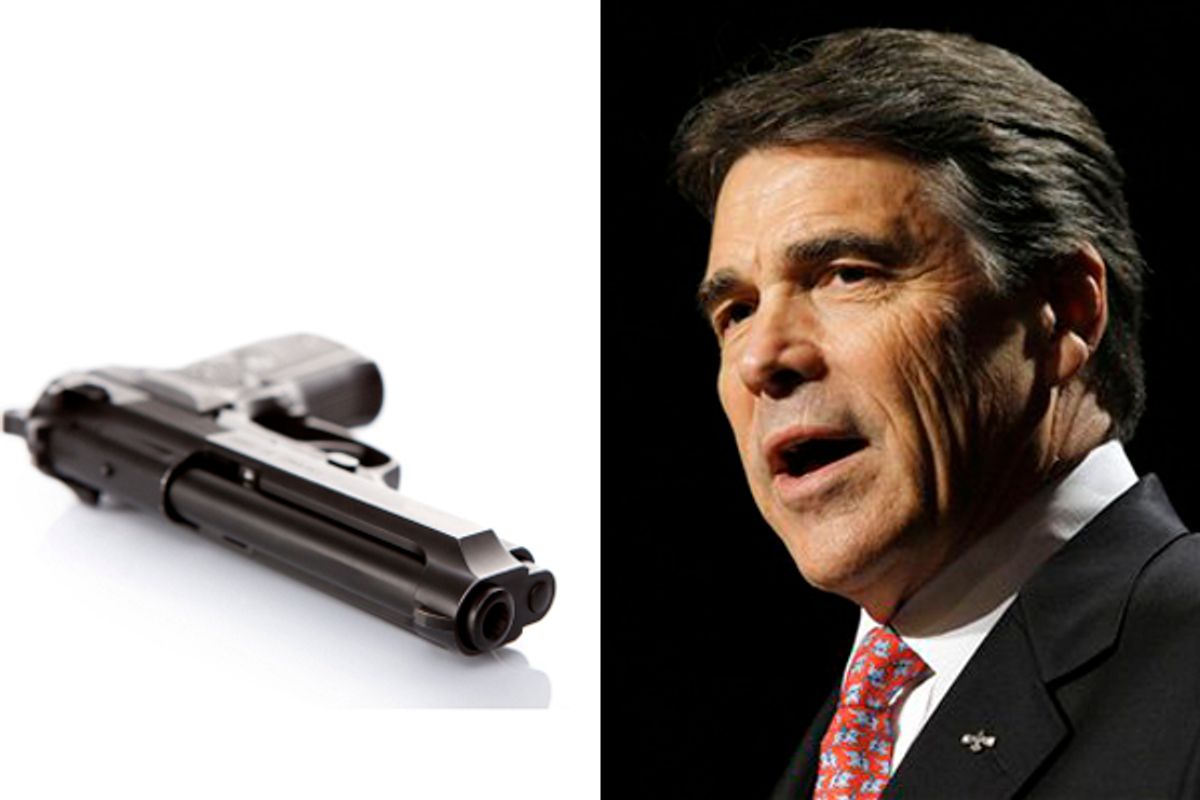 Texas Gov. Rick Perry speaks during the 28th annual National Association of Latino Elected and Appointed Officials conference, Thursday, June 23, 2011, in San Antonio. Perry is considering a run for president. But he received a tepid reception Thursday following speeches by Democratic Hispanic leaders. They denounced some of Perry's most prized policies as openly hostile to Hispanics. Among those issues is a requirement for tougher enforcement of immigration laws. (AP Photo/Darren Abate) (Darren Abate)
--

Why doesn't Rick Perry respect the Second Amendment rights of his constituents? The Texas governor and possible 2012 candidate is having a huge prayer-and-fasting party at Reliant Stadium in Houston, and despite the governor's avowed support for the right of law-abiding citizens to protect themselves with firearms, guns will not be allowed at "The Response."

Reliant Stadium apparently has a blanket ban on "weapons," as if a handgun were a common cigarette or outside beverage.

A Perry constituent asked about bringing his licensed concealed weapon to the prayer festival, and received this response from event organizers:

Thank you for your question. According to the Reliant Stadium, weapons are prohibited. The following text can be found on our website: http://theresponseusa.com/faq.php

"What should I bring?

The Response is encouraging people to fast during the event, however there will be limited food vendors and water for sale. Bring a Bible and a notebook.

Will a Bible and a notebook protect your family from a terrorist? Only if your family keeps those objects in their shirt pockets and the terrorist fires small-caliber bullets directly at their chests!

Our tipster then emailed the governor's office directly to ask permission to bring his gun, and received this response, which totally dodges the issue: As you can see the governor's office is assigning blame for this travesty to the event organizers, who are passing the buck to the operators of the stadium. What ever happened to personal responsibility? If guns are banned at Reliant Stadium (which is owned by Harris County, making it basically a public park), why not hold the event somewhere that respects the wishes of our Founders?

If Rick Perry won't even allow guns at his prayer festival, which will be attended by Good Christian Texans, what will he do with our guns if elected president?