Friday fan fiction: The famed British actor imagines his life if he had turned down the role of Voldemort 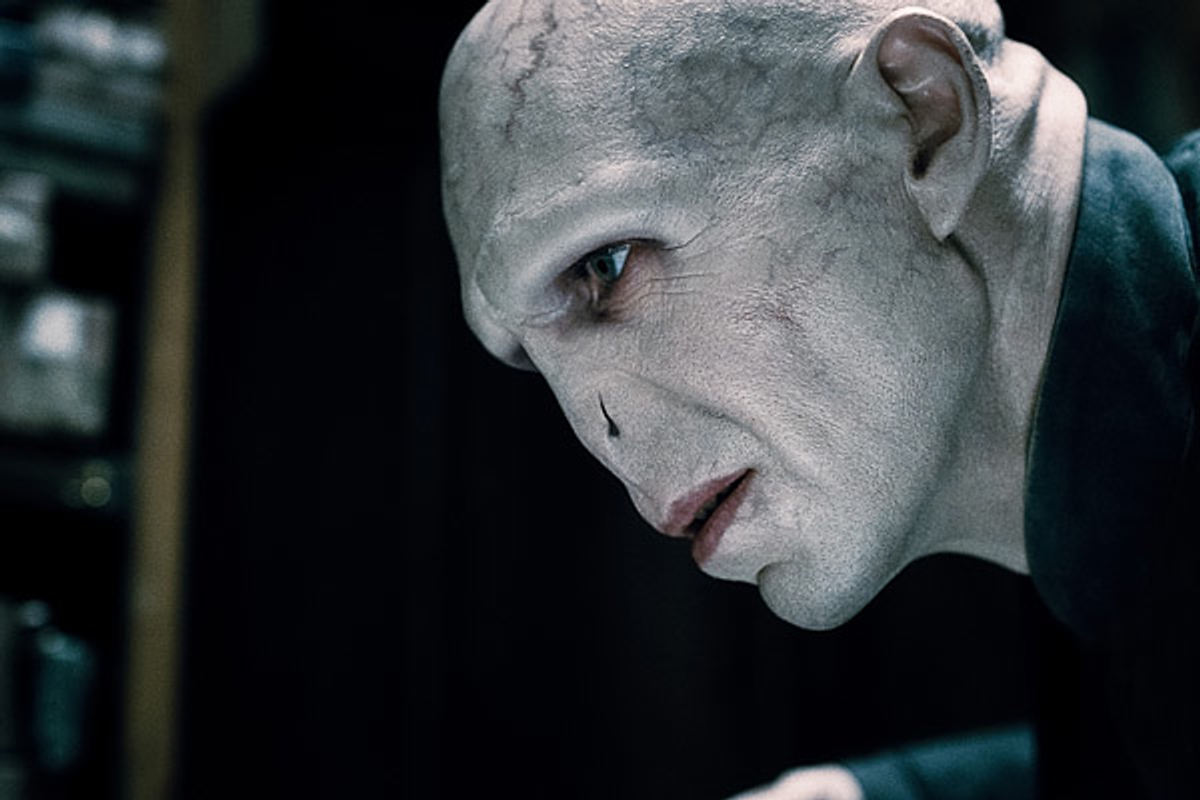 Ralph Fiennes gave an interview to The Hollywood Reporter this week, explaining that his character in the "Harry Potter" movies, Lord Voldemort, was actually just a lonely guy. In the same interview, the Academy Award nominee admitted that he originally didn't want to take the role of the main bad guy in J.K. Rowling's teen wizard series.

You just know that there are days when the British thespian wished to God that he hadn't been working on these films since 2005. In fact, that's probably every day for Ralph Fiennes, now. Wondering what could have been...

Ralph Fiennes woke up with the sun streaming through his loft windows in New York. Even though he was British, Ralph loved to travel. He had just flown in from Barcelona the night before, where he had been hanging out with Geoffrey Rush, with whom he co-shared a private villa and a deep friendship. The two men had been drinking 'til dawn, swapping stories about their experiences on the set of "The King's Speech," which had brought Fiennes the third Best Actor Oscar of his career for his portrayal of the stuttering ruler.

"It's all bloody well that you got the statue for playing the king," Geoffrey had said once they were well into their cups, "But you know the real money is doing these 'Pirates' films. I've made a billion dollars, Ralphie. A billion dollars off of 'effing 'Pirates!'"

Ralph had laughed good-naturedly, but he didn't much envy his friend. He knew that this morning, Geoffrey would likely be on the set of the franchise he had been tied to for years without a break. No one even remembered "Shine" anymore... Instead, a whole generation of kids just knew the skilled actor as Captain Barbossa, and would boo him on the street. "Ah, damn you Ralphie," Geoffrey said as they parted ways as the sun began to rise over the surrounding Gaudi architecture, "but for the grace of God, go I. If only you weren't such a damn fool snob when it came to choosing work!"

It was true, Ralph Fiennes thought to himself as he got dressed and ducked into his favorite Starbucks (the one on 37th street, right next to the Crunch gym where he planned to work out later): better to follow the path of his other best mate, Jeremy Irons, who routinely refused roles in movies that had any chance of a sequel, than to end up with loads of money in exchange for a decade of your career you could never get back.

Nobody at Starbucks bothered Ralph Fiennes, though his barista had hesitantly mentioned how much she had loved him as Colonel Hans Landa in "Inglorious Basterds." Ralph had smiled and obliged the hard-working young woman with his famous catch-phrase from that movie, "That's ah-jackpot!" His Venti iced soy latte had been on the house.

Ralph Fiennes had planned to stroll through Central Park, but found himself avoiding 42nd street. For the last few days, Times Square had been overrun by a mob of people waiting impatiently in line to see the final "Harry Potter" film. Ralph Fiennes shook his head, a sad smile on his face. He couldn't remember the last time he had seen his mate Daniel Day-Lewis, who was currently serving out his sentence in the last of those insanely popular children's films as the villain Volder-something.

It wasn't so long ago that Daniel and Ralph had been working on shoes together in the street of Vienna, taking a much-needed respite between pictures. Daniel had been cobbling, while Ralph had taken up the artisanal craftsmanship of a cordwainer. Daniel asked Ralph what he thought of the script about a boy wizard, and if he should take the role of its noseless dark lord "as a goof." Ralph had been obliged to answer truthfully.

"It seems like a fun character," Ralph Fiennes said, threading the last stitch of a fine leather boot, "but honestly, I think you should take the part in that P.T. Anderson film you were considering last month. The one about the oil tycoon?"

"Actually, I turned down that job," Daniel said. "It just seemed like kind of a downer to me. And it didn't make very much sense. At the end I would have to kill a priest with a bowling pin, while screaming about drinking his milkshake." Ralph had laughed at the time, but he wasn't laughing when he accepted his Oscar that year for his performance as Daniel Plainview in "There Will Be Blood." His old cobbling friend had come to congratulate him after the show, but unfortunately Vanity Fair's exclusive after-party didn't have Daniel Day-Lewis' name on the list. The "Last of the Mohicans" actor had to spend half an hour arguing with a bouncer that he wasn't just some "D-list kiddie star" before calling Graydon Carter himself.

Eventually, Daniel got into the party, because he still was a pretty famous and well-respected actor, but it was embarrassing for everyone involved.

Ralph sipped his iced latte and decided to text Daniel. "Just saw the crowds for HP," he typed on his iPhone, "Good luck with all that. Drinks soon?"

But Ralph Fiennes knew that he would not be getting drinks with Daniel Day-Lewis anytime in the near future, nor would he be bumping into him on set or in pitch meetings. Sure, Daniel would be fine, and he'd still be able to nab some juicy role here or there. But to them, to the audience, he would always be the evil-doer who tried to kill Harry Potter. Or maybe he did kill Harry Potter in the end. Ralph Fiennes didn't actually know what happened: He hadn't read any of the books or seen the movies.

Ralph Fiennes had better things to do with his time.