A progressive case for deficit cutting? 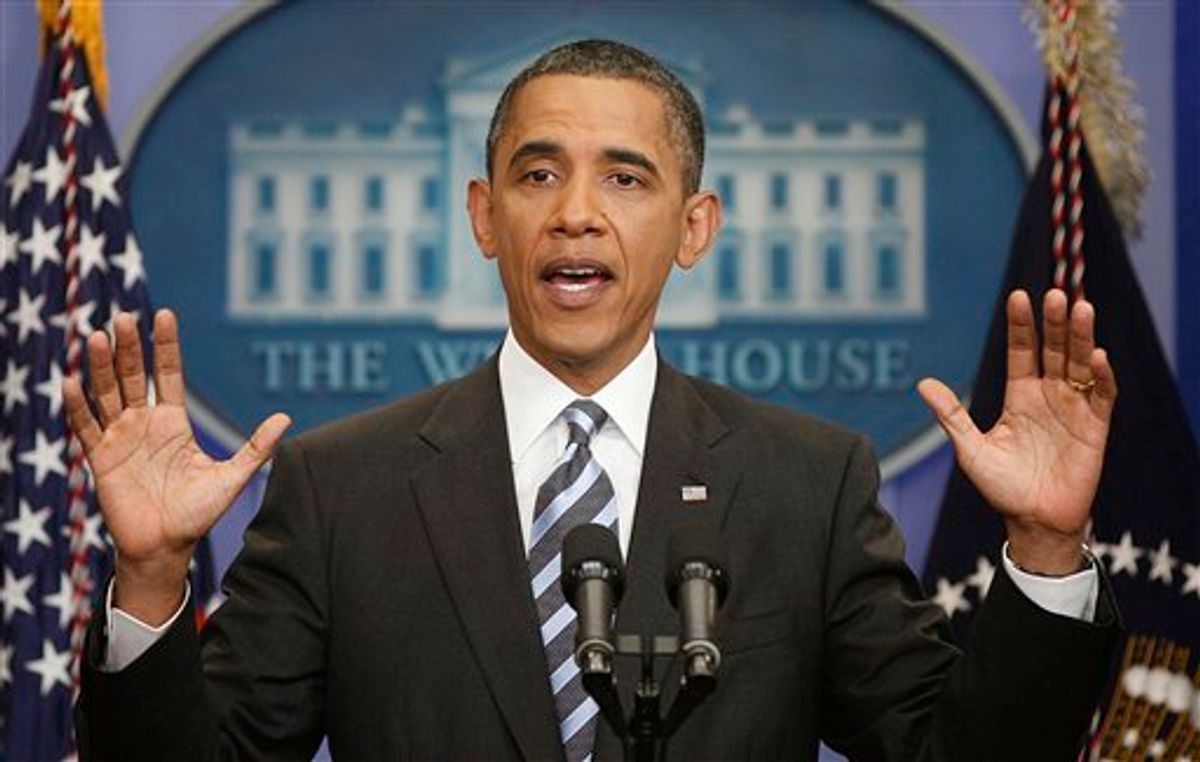 President Obama took the time to directly address his progressive critics in Friday's press conference, even as the default apocalypse looms ever larger before him. I appreciate that. He made the case that people who believe government must play a larger role advancing opportunity for everyone should be in favor of eliminating the growing federal deficit, so that we can spend more on our priorities down the road. He gave a longer version of the argument he made Monday: that Democrats should "get this problem off the table, and then with some firm footing, with a solid fiscal situation, we will then be in a position to make the kind of investments that I think are going to be necessary to win the future."

Here's how Obama made his case, as framed by Greg Sargent:

If you are a progressive, you should be concerned about debt and deficit just as much as if you’re a conservative. And the reason is because if the only thing we’re talking about over the next year, two years, five years is debt and deficits, then it’s very hard to start talking about how do we make investments in community colleges so that our kids are trained. How do we actually rebuild $2 trillion worth of crumbling infrastructure.

It would be very helpful for us to be able to say to the American people: “Our fiscal house is in order. So, now the question is, what should we be doing to win the future, and make ourselves more competitive, and create more jobs, and what aspects of what government’s doing are a waste, and we should eliminate.” And that’s the kind of debate that I’d like to have.

Sargent puts it this way: "Obama’s argument is that progressives won’t be able to make the case to the public for more spending unless the deficit is neutralized as an issue." Both he and Jonathan Bernstein, also at The Plum Line, find something to like in that argument, while not buying it entirely.

I like the fact that the president is addressing his progressive critics without caricaturing them. And I still think he's wrong. There are two problems with it, one practical, one political. Practically, there's no evidence cutting the deficit by slashing trillions in federal spending can put "our fiscal house in order;" it might actually hurt the weak economy. And politically, even if we get the deficit issue "off the table," Republicans will find new ways to smear Democrats and prevent them from keeping their promises to voters. We know, because we just watched it happen.

For a guy whose presidential candidacy was greatly defined by his not being a Clinton, Obama is clearly following the Bill Clinton playbook. Clinton spent his entire political career trying to kill right-wing stereotypes about "big spending" liberals. Not only did he balance the budget to eliminate Ronald Reagan's deficit, he endorsed and enacted a welfare reform plan largely crafted by Republicans. Both bold decisions were supposed to show that Democrats could be trusted to tame the excesses of the Great Society, and usher in an era of smart, pragmatic, humane government that combined private sector discipline with New Deal values. If Clinton could get the issues of welfare and bloated government "off the table," he believed, he could set the table for a progressive agenda.

Had Clinton been right about that, he would have been able to say: “Our fiscal house is in order. So, now the question is, what should we be doing to win the future, and make ourselves more competitive, and create more jobs?" In fact, it should have been better than that: the Clinton-era boom created 22 million new jobs, cut unemployment in half and left a huge budget surplus. Democrats should have been poised for generations of political power, and progressives might have expected a new era of activism to deal with the nation's toughest issues: the people left behind by a changing economy, or those who were never part of it in the first place; the global threat of climate change, one product of rampant, under-checked industrial and post-industrial development. President Al Gore might have been able to pass the baton to President Joe Biden, Hillary Clinton or Barack Obama, to continue progress in solving those urgent national and global problems.

Instead, the conciliating Clinton met increasingly savage political opposition, while a prosperity-addled, value-free media at best enjoyed the spectacle, and at worst joined that opposition. He tried to build a bridge to the 21st century, but he couldn't. And right now, Republicans in Congress are on the verge of sending us back to the 19th. To the extent that Clinton was able to turn back his Republican foes, prevent them from doing their worst damage – remember Newt Gingrich's plan for orphanages instead of welfare for the poor? – and win re-election in 1996, it wasn't because he compromised, but because he had the winds of the economy at his back. (You can argue Clinton's deficit-cutting helped improve the economy, but it certainly didn't turn it around.)

So there is no reason to believe that "getting our fiscal house in order" would vanquish Obama's political enemies and create a mandate for the kind of government spending that would "win the future." More deficit-cutting might not even get our fiscal house in order, if the contraction in spending makes the sputtering economy worse, which is very possible. And in terms of a mandate for investments to "win the future," we all know that there already is one, in poll data anyway. Americans continue to support the agenda Obama ran on in 2008 – letting the Bush tax cuts for the wealthiest expire plus greater investments in education, health care, environmental protection and alternative energy. The problem is matching up the political beliefs measured by polling, and the political beliefs measured by voting, where lasting majorities on behalf of those priorities don't ever seem to materialize.

I don't know exactly why that gap exists. I don't think it would magically close if Obama channeled Paul Krugman or Robert Reich. But I know at least part of it comes from the gap between Democratic campaigning and Democratic governing. In my lifetime, anyway, Democrats consistently postpone delivering what they promised, in terms of demonstrable change for average Americans, while they try to prove to the right and to the media that they're the responsible grown ups – and the rich get ever richer. While Clinton actually did deliver benefits to Democratic constituencies, with vast expansion in the Earned Income Tax Credit as well as college tuition tax credits, by doing it through the tax code he made it hard to see what he'd accomplished – which may be why he was able to accomplish it. (More on that later.)

Meanwhile, lower income and middle class Americans obediently eat their peas, as Obama said we all must, but never get dessert – and lately, many aren't even getting a whole meal. This is not Obama's fault. It's the political world he inherited. It's a little depressing to know he thinks he can change it by doing what Clinton tried 15 years ago. I hope he's right, and I'm wrong.

It's increasingly likely that the default standoff will end with the Democrats compromising, because that's what Democrats do, and in this case, it may be for very good reason: the alternative is frightening. But let's not pretend doing that now means we'll be able to do the right thing later. Later never seems to come, for Democrats anyway.