"Tabloid": The beauty queen who "raped" a Mormon

In Errol Morris' "Tabloid," the story of a former Miss Wyoming and her Mormon lover becomes a delirious enigma 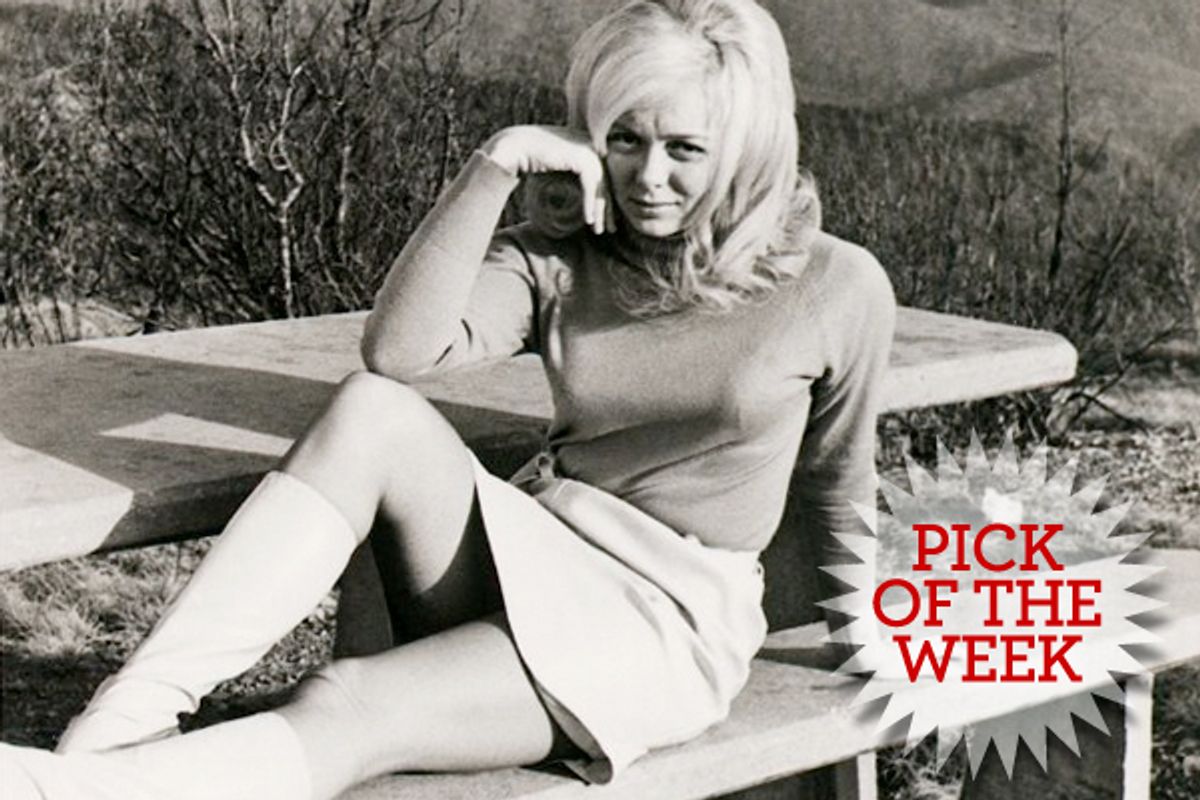 Errol Morris' new documentary "Tabloid" arrives at a curiously opportune moment, with the media world fixated on the potentially criminal misdeeds of Rupert Murdoch's tabloid empire and the sudden closure of Murdoch's Fleet Street flagship, the News of the World. But it would be a mistake to characterize "Tabloid" as an indictment of tabloid journalism, per se. This story about Joyce McKinney, a one-time beauty queen who found herself not once but twice at the center of outrageous, tabloid-friendly news stories, is another of Morris' alternately hilarious and disturbing inquiries into the slippery nature of truth.

Morris has frequently, and accurately, been described as a filmmaker who is fascinated with epistemology, the branch of philosophy concerned with the nature and limits of human knowledge. He's also sometimes been called a postmodernist who denies or elides the distinction between truth and fiction, and that's a charge he has always forcefully rejected. (From a recent Morris tweet: "Compare. Hamlet kills Claudius v. I kill you.") After all, his most famous film, "The Thin Blue Line," clearly articulated the thesis that a Texas Death Row inmate named Randall Dale Adams was innocent of the murder for which he had been convicted, and indirectly resulted in Adams' exoneration and release. Morris sees truth as maddeningly difficult to find or to recognize, and believes that human stupidity and vanity and self-deception often prevent us from seeing it. He even suggests that at certain moments truth may be situationally unknowable, as in the lessons on America's failure in Vietnam delivered by the war's chief architect, Robert S. McNamara, in Morris' Oscar-winning "The Fog of War." But that's quite a different matter from claiming that truth does not exist or is entirely relative.

Along with Michael Moore, Morris is the filmmaker most responsible for the wave of truth-seeking documentaries since the 1990s, but the two directors could hardly be more different. Moore is a humorist and a polemicist, styling himself after Mark Twain and Will Rogers, and never hesitates to stretch veracity past the breaking point in order to make a point or crack a joke. Morris pioneered the use of speculative "reconstructions" in documentary film, which are now found everywhere from TV true-crime shows to Oscar-winners like "Man on Wire." But his later work has gotten ever more formal and rigorous, and "Tabloid" consists entirely of evidence and testimony: Archival footage, newspaper clippings and photographs, along with interviews conducted, in classic Morris fashion, in front of a blank, neutral background. (Morris uses a peculiar device of his own invention called the "Interrotron," which allows "virtual eye contact" between interviewer and subject while the latter faces directly into the camera.) OK, maybe the excerpts from animated films about Mormon theology are here for comic relief, but they too are serving an epistemological purpose.

Joyce McKinney could be seen as an example of life's rich pageant or a case study in the terminally screwed-up nature of the human species, and for Morris that may come to the same thing. He interviewed McKinney only once, for a few hours, and when you see "Tabloid" you'll understand why he didn't need to go back for more. Today she is 60ish and stocky, but McKinney still has the same childlike face and bubbly, self-mythologizing manner as she did when she was Miss Wyoming World 40 years ago -- or when she became the focal point of an English tabloid circulation war in 1977. She's a riveting performer and the permanent star of her own tragedy, and it's well-nigh impossible to tell where the history ends and the fantasies begin. She claims to have a genius-level IQ of 168, which is implausible but just crazy enough to possibly be true, and she claims to have been a virgin when she met a young Mormon named Kirk Anderson in the mid-'70s. Despite strong evidence that she had a thriving career as a nude model and call girl in Los Angeles before that time, we can't exclude the possibility that that crazy claim is also true. (Use your imagination, people.)

Anderson was a big, shambling guy with glasses from a conservative Utah Mormon family, and made a most unusual love object for McKinney, who at the time looked like a pinup-worthy combination of flower child and sex kitten. But the heart wants what it wants, as Woody Allen infamously remarked, and by McKinney's account she's a one-man woman. Her relationship with Anderson was the great love of her life, she says (and, for that matter, of his). OK, she can't quite evade the fact that after Anderson left her -- under pressure, she claims, from his family and his Latter-day Saint overseers -- she pursued him across the ocean, at tremendous (and mysterious) expense, and wound up being arrested on all sorts of salacious charges. According to what Anderson told police later, McKinney kidnapped him from a Mormon temple in the English county of Surrey, had him driven more than 100 miles to a hideaway cottage in Devon, manacled him to a bed and repeatedly had sex with him in hopes of becoming pregnant. "I wanted to be a good wife to him," she muses in the film. "I wanted us to have a good sex life. I wanted to give him lots of babies in my tummy."

As they say, you couldn't make this stuff up, and amid the disastrous economic climate, constant labor strife and Sex Pistols revolution of 1977 Britain, the story of the manacled Mormon missionary and the beauty queen with a North Carolina drawl was manna from heaven for London's tabloid journalists. Morris interviews two of them, former Daily Express columnist Peter Tory and former Daily Mirror photographer Kent Gavin, whose papers were locked in a circulation battle at the time. I can't help seeing both of these guys as products of a deeply disordered culture, but Morris presents them with respect, perhaps seeing their flawed quest for the truth about Joyce McKinney as analogous to his own. Tory, with his faintly aristocratic James Bond manner and hilarious last name, took McKinney's side in almost gentlemanly fashion and printed her version of the story, which he now cheerfully admits was largely rubbish. Gavin is a reptilian Fleet Street Cockney who dug up hundreds of photos in California documenting McKinney's past in softcore porn -- factual material that sold a lot of papers, but was irrelevant to the question of what really happened between her and Kirk Anderson.

Indeed, it's Tory, along with ex-Mormon and gay activist Troy Williams, who articulate the area where Morris clearly thinks the truth lies about McKinney and Anderson, partway between their competing accounts. While it is legally and theoretically possible for a woman to rape a man, most of us see it as unlikely to happen in practice. As McKinney puts it, "That's like putting a marshmallow in a parking meter." Anderson may well have gone with McKinney willingly, enjoyed three days of consensual (and mildly kinky) sex, and then felt consumed with guilt and shame and went creeping back to seek redemption. As Williams explains, Anderson was risking excommunication from the Mormon church, exile from his loved ones, and the abandonment of his potential future as a god on another planet. (I am not mocking LDS theology; to most people's tastes, it mocks itself.) Kirk Anderson, who later married a Mormon woman, had a family and is now a real estate agent in Utah, did not participate in the film and is seen only in old photos and file footage.

It seems likely that the British authorities roughly agreed with Tory's murky, middle-ground scenario; at any rate, when McKinney skipped bail and fled to the United States, they made no serious effort to get her back. The whole thing faded into sleazoid journalism lore, at least until a woman who called herself Bernann McKinney surfaced in Seoul, South Korea, in 2008, as the inaugural client of the world's first "commercial canine cloning service." Initial news accounts identified McKinney as a California screenwriter, and at first she denied being the central figure of the "Mormon sex in chains case." (That's actually the name of the Wikipedia page.) But pictures of her with her five adorable pit bull clones had gone around the world, and McKinney was still recognizable, not to mention recognizably "barking mad," in Tory's wonderful phrase.

Something about "Tabloid" and Errol Morris seems to have gotten under Joyce McKinney's skin, and it may be the fact that Morris' unorthodox methods have gotten closer to making sense of her doubly bizarre story than anyone else ever has. According to some media reports, she has traveled to screenings of the film, sometimes in disguise, to heckle the movie or interrupt Q&A sessions with Morris. She has attacked the authors of online reviews in letters forums; I can only hope she attacks this one! This seems misguided in all sorts of ways, since McKinney voluntarily participated in the film, and Morris never directly challenges her self-presentation as a tragic heroine who has lived in seclusion because she couldn't have the only man she ever loved. I would go so far as to say that in Morris' view, McKinney is telling the truth as she sees it. But under his cold-fish epistemological gaze, that isn't quite good enough. The truth is out there, I guess, but the stories we tell ourselves and the world don't contain much of it.