The secret war in Somalia

Who the U.S. is fighting in the Horn of Africa, and why 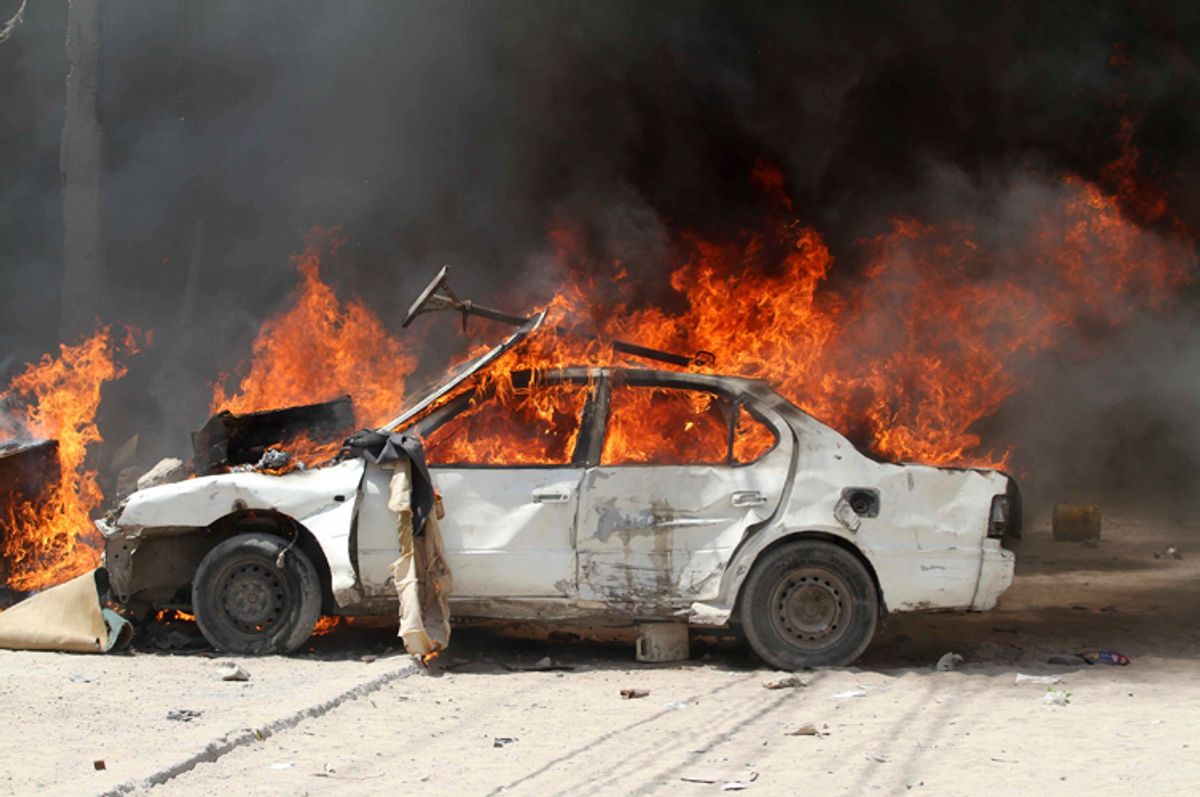 A car burns outside Hotel Madina during a protest in support of Prime Minister Mohamed Abdullahi Mohamed, in the streets of Somalia's capital Mogadishu, June 10, 2011. Two boys were shot dead in Somalia's capital Mogadishu on Friday during a second day of protests against a deal to extend the mandates of the country's president and parliament, residents said. REUTERS/Feisal Omar (SOMALIA - Tags: CIVIL UNREST POLITICS) (Â© Feisal Omar / Reuters)
--

Writing in the Nation this week, Jeremy Scahill revealed that the CIA is running "a counterterrorism training program for Somali intelligence agents and operatives" at Mogadishu’s airport and also using a secret prison in the beleaguered Horn of Africa nation.

The revelations come just two weeks after media reports -- sourced to unnamed American officials -- of a U.S. drone attack in Somalia on members of the Islamic militant group Shabaab, which was designated a terrorist organization by the State Department in 2008.

The Washington Post noted that Somalia is now the sixth country -- joining Pakistan, Afghanistan, Iraq, Libya and Yemen -- where the Obama administration has launched drone attacks.

For context on the secret war in Somalia, I spoke to Daveed Gartenstein-Ross of the Foundation for Defense of Democracies. A regular lecturer at the Naval Postgraduate School, he studies Shabaab and recently wrote about the strategic implications of the historic drought that is devastating communities across the Horn of Africa.

What is the current government of Somalia and where did it come from?

The government of Somalia is called the TFG, the Transitional Federal Government. They're a group that, when you go back to 2006 when the opposition Islamic Courts Union was the dominant force within the country, was hunkered down in Baidoa, a city in south-central Somalia. They were surrounded by Islamic Courts Union forces who were threatening to wipe them out, and were protected by a fairly small contingent of Ethiopian forces.

After the country was invaded by Ethiopia with the purpose of pushing back the Islamic Courts Union, the TFG was able to control territory -- albeit briefly -- in Mogadishu and throughout Somalia with Ethiopian support. But today, they only control a small amount of territory in Mogadishu itself. The TFG is now led by Sheikh Sharif Sheikh Ahmed, a former leader in the Islamic Courts. Certain outside powers who are supporting the Somali government pressured them to broaden the representatives in the TFG to include a number of Islamists (of which Sharif is one) with the goal of fostering reconciliation in the country.

Who is it that the CIA is training in Somalia?

There are two different factions that we're training. One of them is AMISOM, the African Union Mission in Somalia. Uganda and Burundi are the two countries that provide forces to AMISOM, which helps to explain why Shabaab carried out terrorist strikes in Uganda last year during the World Cup, and why it's threatening to do so in Burundi. They are basically peacekeeping forces, though there is no peace to keep. In the past few months, AMISOM forces have actually made a great deal of territorial gains, though I question whether those gains are sustainable. You see that in Jeremy Scahill’s recent report on Somalia, where he claims the Somali government is believed to hold about 30 square miles of territory in the Mogadishu area.

Thirty square miles doesn't sound like very much. How much power does the government really have?

Not very much. But, in fact, 30 square miles is significantly more than they controlled six to eight months ago. At that time most people would say they only controlled a few city blocks. Somalia has the weakest government in the world; it is the most failed state. Hands down. Period.

Who controls the rest of the country?

That differs from area to area. In the north of the country there are two autonomous regions that are governed far better than southern Somalia, Somaliland and Puntland. When you move to southern Somalia, there are several factions that control territory. But the faction that's of biggest concern, and I would say the dominant faction, is al-Shabaab. To understand them, let's take a brief look at Somali history.

Somalia is about 100 percent Muslim, but it was previously welcoming to other forms of practice and the predominant practice of Islam was a peaceful form of Sufism. You first started to get Islamist movements in Somalia -- those that wanted the state to impose religious ideals on people -- in the 1960s and '70s. That's when Somalis started to travel and study abroad and were exposed to Saudi Arabian Wahhabism, and to a lesser extent to the Muslim Brotherhood in Egypt. Around 1983 a group called Al-Ittihad al-Islamiya was founded in Somalia, a precursor to both the Islamic Courts Union and Shabaab. It opposed the then-ruling regime, and when that government collapsed in the early 1990s, Al-Ittihad tried to take control of parts of the country. Mostly those attempts didn't hold very long, but they did in the town of Luuq on the border of Ethiopia. One of the things this group -- and others -- believes is that Somalia has a right to territory beyond the colonial borders, including to areas in Ethiopia that have a Somali-speaking majority. Now, Al-Ittihad started to carry out strikes into Ethiopia and in response the Ethiopians went into Luuq and smashed Al-Ittihad. This helps explain why the Ethiopians saw the Islamic Courts, which were the next major Islamist group to arise after Al-Ittihad, as a threat.

And what is the Islamic Courts?

They were originally a confederation literally of courts. They provided an adjudication mechanism and some stability in anarchic areas of the country. They believed in implementation of a strict version of Sharia law. They shot and killed people for watching the World Cup, people were arrested for watching movies, music was banned at weddings, and so on. Of concern to U.S. policymakers is that there were connections at a leadership level between the Islamic Courts and al-Qaida. Shabaab was originally regarded as being the youth wing of the Islamic Courts; al-Shabaab literally means "the youth" in Arabic.

What was the U.S. role in that invasion?

There are two different views. One is that the U.S. actually encouraged Ethiopia to invade, planned the invasion with them, and assisted from the very outset. The second view is that the U.S. was surprised, but that once it saw that Ethiopia was invading, it decided to jump in and help out. What is clear is that by January 2007 you had U.S. special forces on the ground, and the U.S. was providing air support. Since then there has been much more U.S. presence on the ground in Somalia than has been reported and much more than most people realize.

Why have both the Bush and Obama administrations seen getting involved in Somalia militarily as in the U.S. interest?

If you look back to 2006, there clearly was some connection between the Islamic Courts and al-Qaida at leadership levels. There's a legitimate debate about how strong those connections were. But moving forward to where we are now with Shabaab, the group is clearly connected at its top levels to al-Qaida. There have been multiple statements coming out of Shabaab's leadership that they align themselves with al-Qaida. One Shabaab leader, Omar Hammami, issued a manifesto a few years ago explaining the split between Shabaab and the other insurgent factions. He said that part of the reason was that the other factions were committed to the colonial borders, but in contrast Shabaab was dedicated to reestablishing the caliphate, which is one of al-Qaida's goals. Other leaders have come out and pledged their allegiance to bin Laden or al-Qaida more generally. So this is why the U.S. sees what's going on Somalia as of concern to the U.S. national interest. Couple that, of course, with the experience of Afghanistan pre-9/11 where a safe haven in another part of the world ended up allowing terrorist strikes to occur here.

So even though Shabaab has never actually attacked the U.S. -- correct me if I'm wrong on that -- it's seen as a possibility?

Absolutely. The only attacks they've carried out outside of their own territory were the World Cup bombings in Uganda last year. But we've seen other examples of groups that haven't struck the U.S. and then suddenly they do.