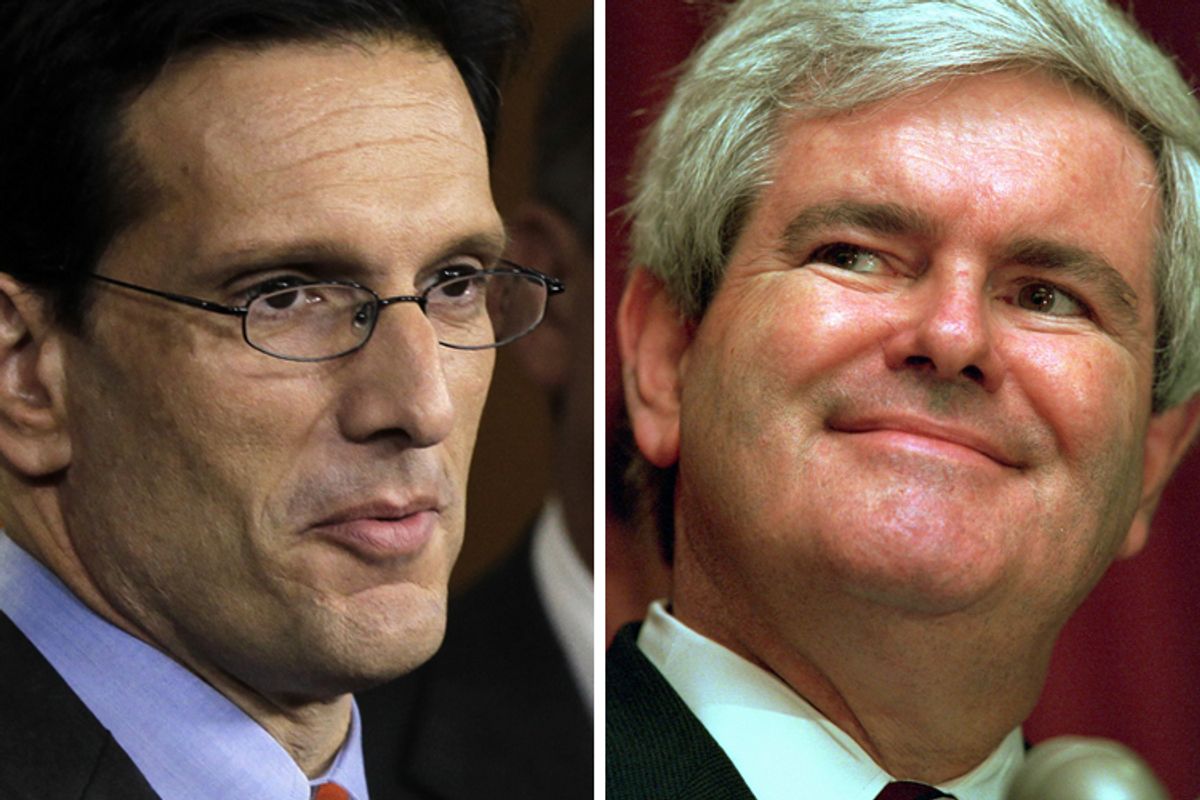 Rep. Eric Cantor, and former Speaker of the House Newt Gingrich in 1995
--

In the summer of 1998, the politicians and pundits were caught up in a frenzy focused on President Bill Clinton and Monica Lewinsky. Today, 13 years later, it is a debate over the debt ceiling that has gripped the political and media worlds.

But even though one involved a blue dress and the other involves a budget, these situations are not so different. Just like the Lewinsky saga, the debt ceiling showdown has been marked by flawed narratives about Americans' views, a restive Republican base that sees the Democratic president as illegitimate, a Republican House speaker dealing with internal political pressures, and Senate Republican leadership more attuned to potential political harm.

Back in April, House Majority Leader Eric Cantor expressed what has become the congressional GOP's animating theme when it comes to the debt ceiling. "There comes at times leverage moments, a time when the president will capitulate to what the American people want right now," he said. "They don't want to raise taxes."

While Republican congressional leaders now seem split on what to do, they still publicly agree on this interpretation of the public's voice -- an interpretation that is clearly wrong. A Gallup poll released this past week showed that just 20 percent of Americans think that a debt ceiling deal shouldn't include any tax hikes and that most voters want rates on the wealthy increased.

Meanwhile, Speaker John Boehner, who owes his leadership post to highly ideological freshman congressmen, has had to guard his right flank closely -- and to keep a careful eye on his own right-hand man, Cantor -- limiting his ability to strike a deal with the president. It is the Senate’s Republican leader, Mitch McConnell, cognizant that this fight could hurt his party's brand, who has introduced a way out with a call for a "semi-clean" vote on extending the ceiling.

In the Lewinsky ordeal, which culminated in the impeachment of President Clinton by the House and his acquittal by the Senate, Republicans were also responsive to their core constituents -- instead of the broad mass of citizens. Polls in 1998 and 1999 found that only 25 to 35 percent of Americans supported Clinton quitting or being removed from office. Very strong majorities of Democrats and independents wanted Clinton to remain president while two-thirds of Republicans did not. Clinton’s job approval rating not only remained strong during this time, it actually rose. According to Gallup data, his approval rating before the story broke in January '98 was 60 percent. It was 64 percent after the House vote to impeach that December and 66 percent after the conclusion of the Senate trial in February '99.

Unlike today, when Republican leaders simply misstate what the public wants and then have their claims dutifully repeated by media outlets as one side of the controversy, discussions of Americans' views in '98 were placed in an odd frame that focused on public opinion yet-to-be. Many pundits were certain that the public would eventually turn against the president. George Will predicted that after the graphic details of sexual activity were revealed, "there’s going to come a critical mass, the yuck factor -- where people say, 'I don’t want him in my living room anymore.'" When the September '98 release of the Starr Report failed to produce such a backlash, Republican officials acknowledged the reality of public opinion but chose to put it aside. For instance, in explaining his vote to remove Clinton from office, Sen. John McCain stated, "I don't lightly dismiss the public's clear opposition to conviction."

Opposition to Clinton by grass-roots Republicans was vehement, but it extended beyond simple policy objections. About Clinton, Republican Rep. Peter King once told journalist Elizabeth Drew, "There’s a mindset since 1993 that he’s an illegitimate president ... A specter of illegitimacy was hovering over him, and it got worse after 1994." The grass-roots Republicans of today tend to regard Obama, who has been subject to bizarre claims about his birth and ideology, the same way. And even if Republican office-holders disagree with this posture, they are likely to still be responsive to these voters, for fear of a primary challenge.

Newt Gingrich, the speaker during the impeachment drive, also felt pressure from within the House Republican conference. Although he was critical to the 1994 Republican Revolution, Gingrich had created political embarrassment for his party with ethics violations, a controversial book deal and his infamous griping about not getting to talk with Clinton while flying back from Yitzhak Rabin's funeral on Air Force One. Gingrich was nearly toppled by a band of House conservatives in July 1997 and ended up resigning after Republicans lost House seats in the 1998 midterms. Even after that election, the impeachment went forward, pushed by Majority Whip Tom DeLay. In 2011, Speaker Boehner is under pressure from Cantor, who has positioned himself as a true believer sympathetic to the party base on the debt ceiling.

Then and now, Senate Republicans displayed less fire for pursuing their base's agenda no matter the political consequences. Perhaps this is a sign that the Senate is operating the way the founders expected, as the legislative body less vulnerable to one election's passions. Or perhaps legislators who are elected statewide are savvier and more sensitive to national dynamics. During Clinton's impeachment, Senate Majority Leader Trent Lott did not use highly charged rhetoric. Lott always knew that he couldn't get the two-thirds majority needed to remove the president, but the Senate had the responsibility to hold the trial. Still, in early 1999, reporters and pundits regularly called the Republican Party "the impeachment party." Similarly, it is McConnell today who frets aloud about how the debt ceiling crisis could affect the Republican brand.

Under siege, President Clinton told the American people he got up every day thinking about them, and he kept their support and his office. Today, President Obama projects calmness and talks about our commonality and commitments. But he also must contend with an opposition party that, at a time of great risk, has chosen to deny what the American people want.

Amy Fried is a professor of political science at the University of Maine and the author of "Pathways to Polling." She blogs at www.pollways.com. Follow her on Twitter: @ASFried.