Michele Bachmann was pretty sure the "last days" were here, in 2006

Plus: Her husband buys her shoes! 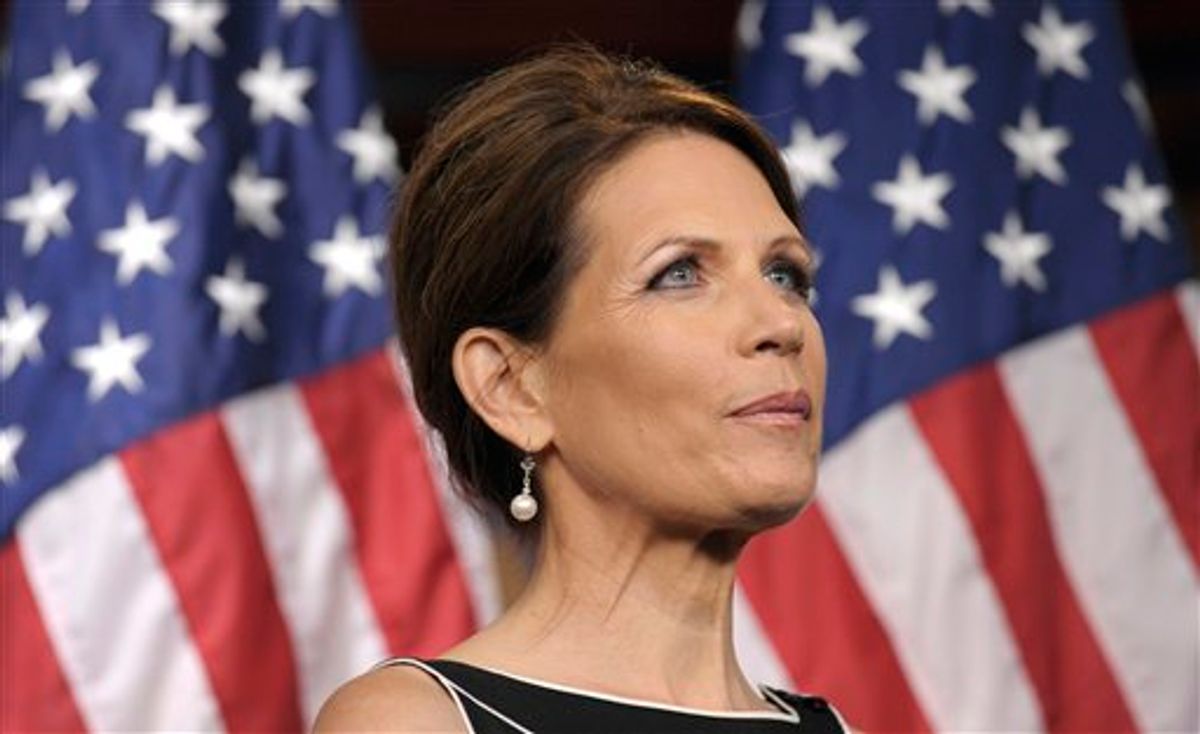 FILE - In this July 13, 2011 file photo, Republican presidential candidate, Rep. Michele Bachmann, R-Minn. takes part in a news conference on Capitol Hill in Washington. So long death panels. Hello "rationing" board. An independent panel authorized by President Barack Obama's health care law to control excessive Medicare cost increases is drawing heavy fire from Republicans. Nearly every health industry lobbying group is pushing for its repeal, as are some consumer advocates. GOP lawmakers call it a rationing panel, and at least one has suggested seniors will die from its decisions. (AP Photo/Susan Walsh, File) (AP)
--

Turns out Michele Bachmann wants to be president of the Great Tribulation. As she explained back in 2006, we are living in the End Times. Jesus will come back and judge the world basically any day now:

The clip comes from a prayer she delivered to the radical ministry "You Can Run But You Can't Hide," publicized by ThinkProgress and Dave Weigel. (The City Pages was on it in May and I am guessing Dump Bachmann had it up years ago.)

Now the question is, why is Bachmann running for president? If Michele Bachmann is a true Christian, she should rise bodily to Heaven during the Rapture, making her totally unable to govern. Is she going to pick a non-believer running mate in order to ensure continuity of government? The people have a right to know who will be president during the famines, wars, and devastation that will overtake the Earth in the years before the Second Coming!

Oh, one more question: What do you think will be "worse" for Bachman's campaign: Her religious extremism, or the fact that her fabulous gay-curing "therapist" husband buys her shoes?

Bachmann, 50, describes her style as "classic with a snap." "I dress fairly simply," she said. "I like clean lines. I like solid colors. But I like an outfit to have a little kick." For inspiration, she looks to Audrey Hepburn and Jackie Onassis - and indeed, the pale pink suit and gloves she wore for President Bush's fund-raising visit in August seemed a flashback to Camelot.

That choice was inspired by a girlfriend who owned "a darling pink suit" that she'd bought at Herberger's. Bachmann thought it was the special outfit that the event required, "so my girlfriend went to get an identical one at the store's sidewalk sale," she said. "For $39!"

And the gloves? They were a garage sale find, Slama said.

Shopping help comes from another quarter, as well. Before Vice President Dick Cheney's visit this past summer, Bachmann's husband, Marcus, hit the stores - "he's got a good sense of style" - and came home with "a sleek, simple hourglass dress with a yoke collar! in winter white." He even bought a matching coat and shoes. "I just slipped it on."

I feel like plenty of Republican voters can relate to hoping Jesus comes back real soon, but how many GOP husbands out there would be able to buy their wives full outfits -- that match and fit properly -- on anything resembling short notice?

Obviously I am much more concerned about elected officials believing dangerous comic book stories about King Jesus massacring the majority of the world's population for not believing in Him, but that I bet Michele Bachmann's primary opponents are paying more attention to Marcus Bachmann's shopping acumen.